“I am troubled seeing SU’s center being disbanded”

Laura Gray-Rosendale, a Syracuse University graduate who wrote a memoir about her 1988 rape while she was a student, said she’s concerned that SU has closed its Advocacy Center.

“I am troubled seeing SU’s center being disbanded when centers are being created on so many campuses,” Gray-Rosendale said after a talk Thursday, Oct. 9 at Le Moyne College. She spoke that afternoon at SU, where she said students were vocal about their opposition to the center’s closure.

Gray-Rosendale is the author of College Girl (State University of New York Press: 2013). She discussed her memoir with the New Times in April.

She was raped by Michael E. Holm, whose grandfather was the former CEO of Carrier Company and chair of SU’s board of trustees. Carrier donated $2.75 million for naming rights to the Carrier Dome.

Holm served eight years in state prison. He had accepted a plea bargain of first-degree burglary. If convicted today on the same charges, Holm would likely have served 25 years.

After her experience, Gray-Rosendale created support groups for rape survivors at SU and advocated for more services to educate and aid students.

SU Chancellor Kent Syverud in May announced the Advocacy Center would close and its services would move to the Counseling Center and other campus offices. The decision has spurred protests from students and community advocates.

“It’s hard for survivors to come forward at all, and to deal with it psychologically can be a barrier,” Gray-Rosendale said. “To have the first person to talk to be a counselor, that can be daunting.” 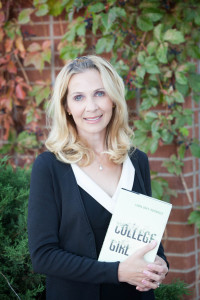 On the “It’s on Us,” a campaign to end sexual abuse on campus: It fails to do an “analysis of the systemic nature of rape culture. … Rape is portrayed as something in which they (men) can intervene and stop it. Would that it were so simple.”

On proposed affirmative consent laws that would require sexual partners to say “yes” at each stage of sexual interaction: “There needs to be better discussion about consent, but that might not be the answer. … As long as someone can change his or her mind, it’s good to get some blurry lines worked out.”

On what she would say to NFL or NCAA leaders about male athletes and sexual assault: “I would go in there and say what happened to me. I would say how he was characterized in the mainstream media: ‘a gentleman’ and ‘ captain of this.’ … I would tell them you are in danger if you don’t start to train your players about sexual violence. They are going to be held accountable legally and ethically.”

On why telling the story is important: “If it’s happened to you, be sure to surround yourself with people who love you. If you know a survivor, listen. That’s what they really need.”
Renée K. Gadoua is a freelance writer and editor who lives in Manlius. Follow her on Twitter @ReneeKGadoua.

They Work and Work, but Will They Get to a Bowl Game?
Kramer Says Goodbye to his Father
To Top