The first American amateur woman out of the water at Kona

Question: Who is Miranda Carfrae?

1) Miranda Carfrae is the three-time world Ironman champion in the women’s division, who just nailed the Kona, Hawaii, course in a near-record time of nine hours, 55 seconds.

2) Miranda Carfrae is the woman who finished the opening portion of the race, a 2.4-mile ocean swim, more than a minute slower than Syracuse native and Nottingham graduate Lectie Altman.

Altman, who was profiled in the New Times on July 5, was the first American amateur woman out of the water at Kona, on Saturday, Oct. 11, she finishede the swim portion of the race in an astoundingly speedy 58 minutes, 55 seconds. She completed the bike course, a hilly lava-strewn patch of Kona prone to heavy crosswinds, in five hours, 48 minutes and 46 seconds. As if that wasn’t enough, her marathon time of three hours, 38 minutes and 15 seconds was good enough to rank ninth in her age group and 58th among all women.

But it was the swim, a sport that Altman excelled at through high school and college, that wowed the spectators, including her mother, retired postal worker Nona Altman, who flew to Hawaii from Syracuse to watch her 30-year-old daughter compete with the toughest endurance athletes in the world. Kona is open only to experienced triathletes who have competed at the full Ironman distance and met qualifying times for their age groups. 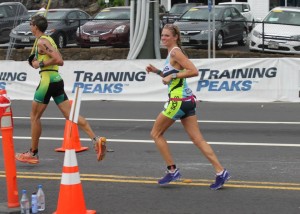 One day after finishing the race, Altman sounded exhilarated as she spoke by phone with the New Times about her accomplishment. For someone who had just completed the world’s toughest endurance competition (her total time was 10:34:06), she sounded remarkably calm — and was thinking ahead to her next race. She had only one disappointment: a slower than expected swim time.

“I wanted to be the first amateur woman out of the water,” she said, “but at the turnaround, I took a wrong line after the turn.”

That tangent allowed several Australian women to get ahead of her, and four of them turned in better swim times. (She also mentioned being slowed by weaving in and out to pass male swimmers who had started 10 minutes before the women.)

The bike ride turned out to be the biggest challenge of the day.

“It was the scariest bike ride of my entire life,” she recalled. “The winds were unbelievable. There is a climb to the turnaround, and when you come down, you always have a big tail wind, so you’re going super fast, and then there were these super strong crosswinds. My foot came unclipped, and I almost fell off the bike. I don’t know how I kept from falling off the bike.”

In the final leg of her Ironman, Altman was grateful for a bit of cloud cover and the availability of ice and water at every mile along the way. The temperature had climbed to nearly 90 degrees, making it nearly impossible for many athletes.

“It’s been an unbearably hot summer here,” said Altman, who works as a high school guidance counselor on the big island of Hawaii. Being able to train all summer in that heat worked to her advantage on race day.

Her biggest goal for the day had nothing to do with the numbers.

“I wanted to be happy all day.” She recalled an Ironman two years ago. “I got grumpy on the bike and didn’t enjoy it at all. Five hours on the bike is a long time to be alone with your own thoughts.”

On this day, she said, she felt happy all through the race.

Interview: Gene Conway and Toby Shelley
They Work and Work, but Will They Get to a Bowl Game?
To Top