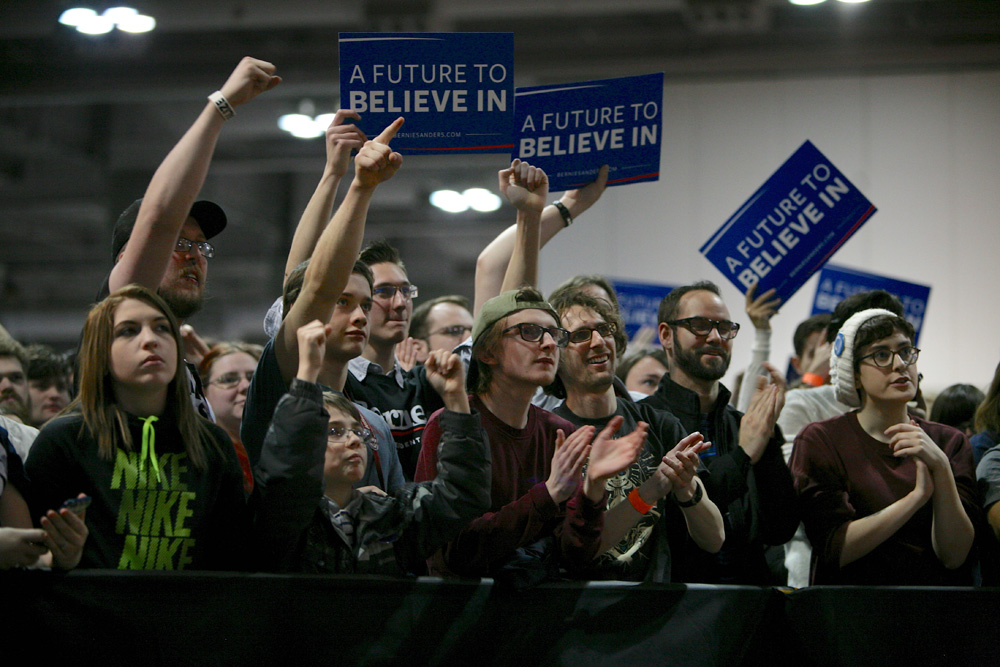 The 2016 presidential race has taken us on a road of many inconsistencies and surprises, but there’s one thing that has remained constant throughout — young people “feel the bern” more than any other candidate.

According to CNN exit polls, Bernie Sanders has consistently won a majority of voters aged 18-29 in many states that have held their primaries and caucuses, some with margins of 80 percent or more. So why are the youngest of voters flocking to someone who, if elected, would be the oldest president in our history?

Many are asking that question, including myself, so I set out to find out why. What I found wasn’t too surprising at first. It happened a year ago when young people turned on the television or went online to see who this old man shaking his fist was. A year later, he is their white knight.

The objective that really propelled Sanders’ campaign was his proposal to provide free public college education, paying for it through a transaction tax on Wall Street trades. With tuition skyrocketing, this caught students’ attention and they have held on since.

Last May, The Wall Street Journal reported that the average amount of student loan debt reached $35,000. Even adjusted for inflation, that’s still more than twice the amount borrowers had to pay back just 20 years ago. And that trend isn’t likely to reverse any time soon. Nationwide, student debt is now more than $1.2 trillion.

Combine those debts with stagnant wages and the fact that the middle class has seen little improvement in standard of living since the 1970s. These conditions are making it not just difficult to pay off student debt, but hard to pay for anything. In 2013, The Atlantic reported that young adults make an annual $2,000 less today than their parents did in 1980, adjusted for inflation. It’s a different world for them. It’s becoming nearly impossible for young people to even think about owning a home, opening a business or starting a family. That’s enough to keep young people awake at night.

This comes back to Sanders’ other main argument — income inequality. Sanders persistently mentions the disappearing middle class, and his intention to place higher taxes on the rich and to break up the big banks. So what’s that got to do with the youth who have barely started working or maybe haven’t paid taxes yet? Well, this is the age group that grew up during the Great Recession. Many of these people have seen their parents go from prosperity to poverty in the last decade, but then saw tax breaks for the rich. The result is the creation of what some have called the “bailout generation” — the mentality being that the government bailed out the banks, so why can’t they bail me out? Many believe Sanders is the candidate that can act on that notion. They believe he is the one who remembers those who feel they’ve been forgotten about in the U.S.’s economic structure, not just the powerful few.

Alright, so Sanders’ economics excite many. I said that didn’t surprise me. But what surprised me was that economics wasn’t the thing people mentioned first when I asked what made him resonate. It wasn’t free college or health care or even income inequality. It was his character.

“Human” was a word that came up often. They said he was a different kind of candidate, one who really cared about the common American. A new survey from Frank Luntz found that 31 percent of young Americans chose Sanders “as the political figure they like and respect most,” which puts him higher than Barack Obama, who drew large young crowds in his 2008 and 2012 bids.

A lot of people referenced his refusal to accept super PACS as something that makes him stand out. In a way, it’s a symbol to them that he not only wants to fight the establishment system, but he already has the ability to. After all, he has raised more money than Hillary Clinton in each of the last three months, despite Clinton’s delegate lead and large Democratic donors. He loses states, but his momentum continues and even grows.

That gives some a sense of hope that someone like Sanders can bring real change to the country they’re growing into — something they feel Obama promised eight years ago but didn’t really deliver.

Sanders should also be given credit for causing such large numbers of young people to engage in modern politics. His ability to motivate young people to vote is something we haven’t seen since the days of George McGovern and, later on, Ronald Reagan. Even Obama’s appeal pales in comparison.

Frankly, I’ve been shocked that so many people in their late teens and early 20s have been paying such close attention to the race. They’ve been registering to vote, watching the news, watching primary results, educating themselves on the issues at hand, discussing them with their peers and most importantly, voting.

If someone like Sanders can excite these people to go vote for him the way he has, no matter the reason, then it excites me that this generation can actually become an involved and informed electorate. And that’s good enough for me.

How Important Is the New York Primary?
My Smoking Gun UFO Proof
To Top