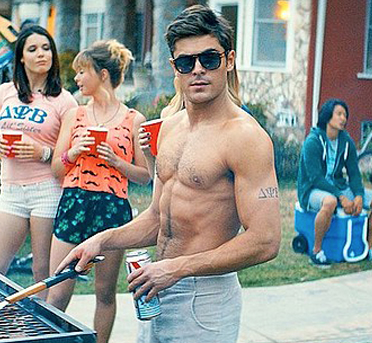 Early on during “Neighbors,” we see the Radners, Mac and Kelly eyeing prospective buyers of the house next door, a pleasant-looking he-and-he-with-baby family, and giving them a big thumbs-up.

They want the gay couple to buy the place. Wouldn’t they make for a clean and quiet family?

Lo and behold, though, when a rented moving van arrives, the members of a fraternity and all that entails spill out.

Immediately Mac and Kelly start suspect the very worst, and start planning ways to win these frat boys over, make them think the married folk with a baby are cool, and decide to keep things quiet thereafter.

You bet that this comedy directed by Nicholas Stoller and written by Andrew J. Cohen and Brendan O’Brien goes on to fulfill every stereotype and generalization you’d expect from a film that places a college fraternity in a house in a quiet town neighborhood.

The adults pretend they are the young men’s friends while actually trying to get them to do what they want … and maybe discover that they still have a tad of a taste for the wild life that lives inside of their married selves. When their plan goes awry, they pout and shout and stomp and firmly believe that these damn kids ought to listen to them because they’re the adults, damn it.

Seth Rogen and Rose Byrne work well together as the Radners, actually, although he looked to me absolutely ridiculous trying to fit in with the frat boys by wearing one of those flat-brim, big hats that I hate so much, and none of the frat boys were wearing. Ike Barinholtz and Carla Gallo add to the humor as a divorced couple that the Radners count as their best friends. They won’t choose sides, so they enlist them both in as part of the great outwit-the-frat caper.

Soon enough, “Animal House” gives way to “War of the Roses,” and the fight between the fraternity members and the married couple escalates to extremely wild heights. Funny gets shoved aside in some cases for just plain mean. I loathed these scenes. And I hated myself for laughing at some of them.

After a last-battle-of-wits scene fit for Wrestlemania and the Fourth of July in a sky near you, the story aims for one last big laugh and healed feelings. I was straining my ears to hear “Kumbaya” during the closing credits, but they missed that stereotype.

A garage? I’ll stay in jail
What about the buttons and cufflinks, Batman?
To Top