Heater and Blumer first composed All I Want nine years ago for the Baldwinsville Theater Guild.

Garrett Heater and his Covey Theatre Company occupy the catbird seat in Syracuse community theater. Not only are they the team to beat at nominations time for the Syracuse New Times’ Syracuse Area Live Theater awards, but Heater and Covey, with partners Susan Blumer and Michael Penny, can be expected to fill the seats at the BeVard Room of the Mulroy Civic Center with just about anything they wish to do. Heater also produces his own original material, like the historical speculation, Lizzie Borden Took an Axe (November 2010), universally received as far better than a personal indulgence. His current production is co-written with partner and choreographer Susan Blumer, All I Want for Christmas Is . . .  Most of the roles in it are taken by children, ranging down to age 5.

Heater and Blumer first composed All I Want nine years ago for the Baldwinsville Theater Guild, well before they moved downtown. Some of the double-sided sets have been retained and no details have been dated, with the possible exception of a video game monitor three feet deep. Heater gives Blumer first credit for the story’s original conception, but he has supplied all the words as well as the serviceable original music and lyrics.

The narrative begins with variations on familiar elements. Santa Claus (Edward Mastin), with a trim beard and a flat tummy, is an all-business CEO with semi-reliable employees. Insouciant reindeer Prancer (Darian Sundberg), with antlers and a black nose, had been snooping through the Naughty and Nice printouts before the Big Man arrives, leaving reindeer hair in his chair. Even before they started talking, a big-eared elf with a mop of black hair has been prowling the set, peaking in windows and checking out the way children behave. His name is Elfis (Jimmy Wachter), and, yes, he’s wearing sequined bell-bottom trousers, and is given to riffs on the Ghost of Graceland. 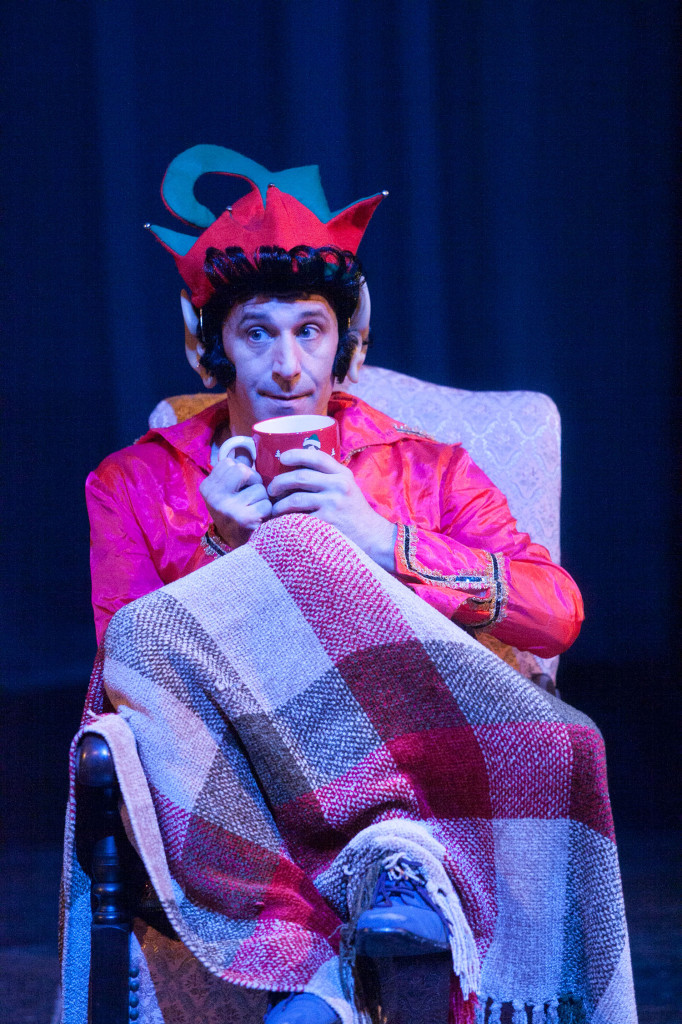 All shook up: Jimmy Wachter does an Elfis impression for Covey Theatre’s All I Want for Christmas is. . . (Photo: Amelia Beamish)

Near the top of the Naughty list, after Justin Bieber and the Kardashians, lie the names of some local kids. The text is replete with references to Central New York snow. High up on the roster lies the name of video-game obsessive Christopher (Christof Deboni), who stares only at the screen and has edited warmblooded human beings out of his sight, which chagrins his father (Bil Hughes).

More ferocious is the fur-coat-wearing shopaholic Abigail (Esther Richardson), whose life is defined by how many purchases she can make and conspicuous possession. Heater has written her one of the snow’s snazziest songs, “All I Want is Everything,” that could have a life of its own off-stage.

Wachter and Sundberg, not unlike Joe Pesci and Daniel Stern in the Home Alone movie franchise, are steady sources of comic delight throughout. Wachter, who gets billing above Heater and Blumer, has a strong record in more than a dozen shows for the the Talent Company and Rarely Done Productions. Prancer, however, is a departure for Sundberg, previously known for such dour roles as John Proctor the martyr in Arthur Miller’s The Crucible.

In Heater’s riskiest move, he has Elfis and Prancer abduct the three children so that they might get another view than the selfish one. Not all persuasion runs in the same direction, however. Denouncing the open-heartedness and selflessness of Christmas is a white-clad figure of dread, Mr. I. C. Icle (LaRon Bradley), who speaks for the Grinch, Scrooge and maybe a bit of Michael Douglas’ Gordon Gekko in Wall Street.

Justifying her billing as co-creator and co-author, Susan Blumer does a bang-up job with the more than dozen youngsters in the ensemble, many set apart by Ann Grey’s distinctive costumes. The kids are disciplined yet relaxed and always on cue. Geographically dispersed credits speak to a wide-ranging audition process, but then again two of the children are named Heater and two Blumer.

This production runs through Sunday, Dec. 15.