The name of Christopher Durang is widely admired by anybody who’s been going to live theater regularly in the last generation. He can be counted on for irreverent, loopy humor. A host of younger playwrights who sound like him are happily called “Durangesque” or “Duranged.” Few people, however, will have heard of Mrs. Bob Cratchit’s Wild Christmas Binge, now at Central New York Playhouse’s Shoppingtown venue. In his program notes director Greg J. Hipius candidly admits that a copy first fell into his hands as a bonus in the package containing a better-known Durang play. He does not say he wanted to bring it to local stages because it had a fabulous production history or that he had seen a side-splitting mounting of it. In fact, it is rarely performed.

The show starts as a spoof of Charles Dickens’s A Christmas Carol, seen through the eyes of the usually unappreciated wife–here given the name Gladys (JoAnne Rougeux)–of Scrooge’s long-suffering clerk Bob (Matthew Green). Fed up with poverty and a house filled with kids (up from Dickens to 21), Gladys is driven to drink, thus the “binge” of the title. Boozed up, she wanders to the River Thames and contemplates jumping in, asserting that it would have been better if she was never born. This is like, ahem, It’s A Wonderful Life’s George Bailey (played by John Kenrich), who is in the show as well as the husband and wife from O. Henry’s Gift of the Magi plus characters from other Dickens novels and ongoing references to the British TV series Doctor Who.

Describing all the allusions to other works and the teasing of dramatic form (one character asks, “Why don’t I have more lines?”) would make Mrs. Bob Cratchit sound funnier than it is on stage. True, the play has more than a dozen fabulous bits, like Heaven’s Operator (Hinda Crewell), who answers prayers in a monotone, “You call is important to us and may be monitored for quality control.” In between there’s a lot of anxious space where we’re waiting for the next goodie.

A large part of the problem is in the script itself. Durang wrote Mrs. Bob Cratchit for a premiere in Pittsburgh in 2002, which explains why it begins with then-timely jokes about the failure of Enron and the perfidiousness of disgraced mogul Ken Lay. In a game attempt to freshen these, director Hipius adds some gags about 2013 people, like Angelina Jolie. Overriding this is Durang’s insistence that we keep remembering American popular history from 1977, 25 years before the play opened and, now, 36 years ago. A time-traveling Mrs. Bob and her new mate (name cannot be told) will be morphed into a scandal-plagued couple known for obnoxious comments about their own wealth. No Cliff’s Notes allowed. 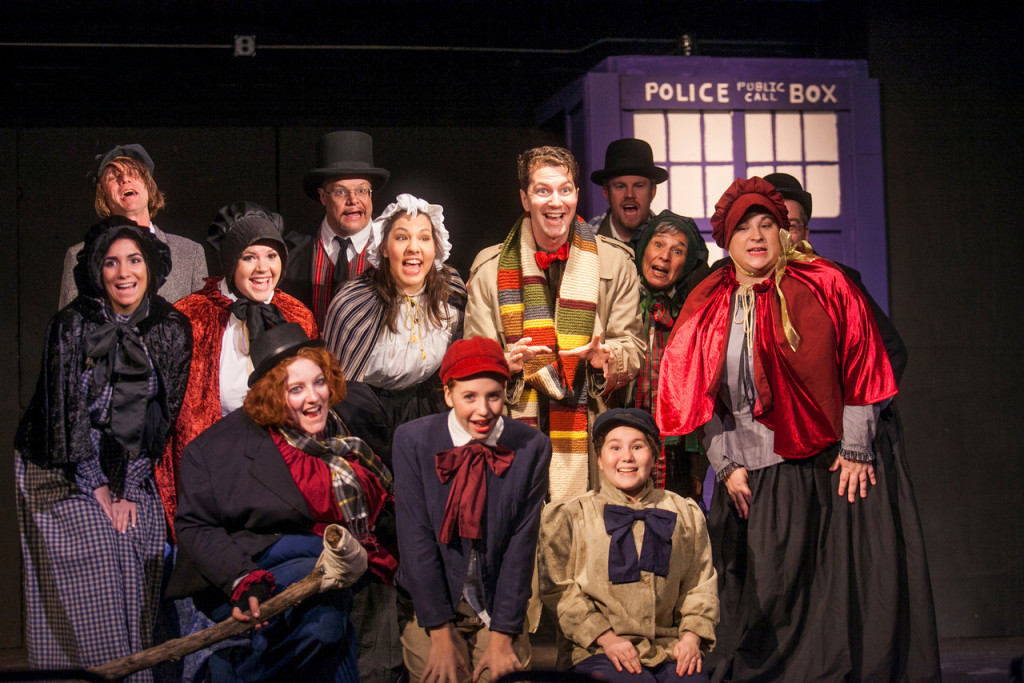 In the meantime, several players are knocking themselves out, even if we are not always laughing. Justin Polly takes on four polished roles as the impartial narrator and, with slight costume changes, the Ghosts of Christmas Past, Present and Future. He sticks with a British accent through the greatest number of lines, but it sounds more like Edinburgh than London, possibly the neighborhood where Sean Connery grew up. White-bearded Jon Wright brings a sharp, jagged bite to Ebenezer Scrooge that would serve in any production of A Christmas Carol.

As a one-man music section, pianist David Sabin is the hardest-working performer in the show. No titles are cited in the program, but the listener can recognize snatches from Lionel Bart’s Oliver, Kurt Weill’s “Mack the Knife,” and themes from Doctor Who.

Time was when lots of people enjoyed eating fruitcake at Christmas. To make it appealing, bakers jammed in as much disparate material as possible, such as cranberries, raisins, red currents, dates, figs, peanuts, cashews, Brazil nuts and candied cherries. All things we like, taken by themselves. Get stuck with a fruitcake now and you’re likely to give it away.

This production runs through Dec. 21.