The Music Man. In the ads for its family-friendly holiday show, the Redhouse Arts Center proclaims, “This is not your grandfather’s Music Man.” The words do not mean, we are happy to report, that Marian the Librarian has become an I.T. specialist or that Harold Hill is now huckstering tablets. What has happened is that the world of pre-World War I River City, Iowa, 40 years back when the show opened 56 years ago, is now too old for nostalgia. Instead, it’s a fantasyland, like Camelot. In such an environment music can be reshaped to express the talents of the performers and the location of the Redhouse, midway between Armory Square and the near West Side.

We hear director Stephen Svoboda’s new tone in the novelty number, “Shipoopi.” The title is a nonsense word coined by composer-lyricist Meredith Willson that seems to mean something like “girl who plays hard to get.” As it spoofs a pop style from 1912 that none of us remembers, it is often one of the few duds in productions elsewhere.

The casting of popular community theater veteran Stephfond Brunson, the show’s co-choreographer, as Marcellus Washburn opens the door to innovation. Marcellus, Harold Hill’s confidant and another con man, has to deliver this number. Brunson often plays characters totally unlike himself, but with a sly wink here he lets us know that this Marcellus can be revealed as a hip, urban Syracuse guy–Stephfond himself. So his “Shipoopi” now has a driving beat with a full chorus, and it stops the show.

As in other productions requiring big casts (35!), director Svoboda calls on the resources of the Community Folk Art Gallery and the Hillside Family of Agencies, along with well-trained suburban youngsters, for small roles and chorus members. This large-heartedness has paid dividends in the person of exuberant Mark Galvagno, here seen as the Constable and also the Conductor, attracting a supportive following.

Bright new faces in this show come from Tajanae Lane as the mayor’s rebellious daughter Zaneeta, Kai Gesek as Marian’s shy brother Winthrop with a prematurely deep voice for “Gary, Indiana,” and Nancy O’Connor as Amaryllis, the music student who gets the note perfectly wrong every time. O’Connor has to hold her own with professional soprano Caitlyn Oenbrink (as Marian the librarian) in the wistful early duet “Goodnight, My Someone,” and Gesek takes charge of the first act’s finale, “The Wells Fargo Wagon.”

Svoboda’s work with local young people can look like the beginning of a repertory company. He takes good advantage of the developing talents of Jamaal Wade, as Tommy Djilas, the independent boy originally seen as the child of Slavic, across-the-track immigrants. Wade prepared for The Music Man in a way by playing the title character in Peter Pan last May at the Redhouse.

For the two leads director Svoboda has imported singers with lengthy and lustrous credits. Soprano Caitlyn Oenbrink’s dazzling Marian Paroo makes one regret she doesn’t have more musical numbers. Her lyrical power raises the appeal of the first act’s “My White Knight,” not usually cited among the show’s strongest numbers, and she’s absolutely glorious in her half of the signature “Till There Was You,” Meredith Willson’s greatest hit. Oenbrink also moves with such graceful deportment, wearing white lace gloves as she goes about her chores, that we know any burg imperceptive enough to allow her to remain a spinster would be defenseless against any traveling shyster.

Oenbrink’s brilliance puts the other imported singer at a disadvantage. Josh Rodriguez as Harold Hill is a handsome baritone, and a charmer, something in the mode of the younger Gene Kelly. He is winning in his half of the “Till There Was You” duet, but in the famous big production numbers everyone knows, especially “Ya Got Trouble,” he lacks the demonic, driven fury of an Elmer Gantry of brass instruments.

Dark-browed Dan Tursi, company head at Rarely Done Productions, strikes a perfect tone as repressive, self-important Mayor Shinn. With no self-mockery, he means business and his business is meanness. 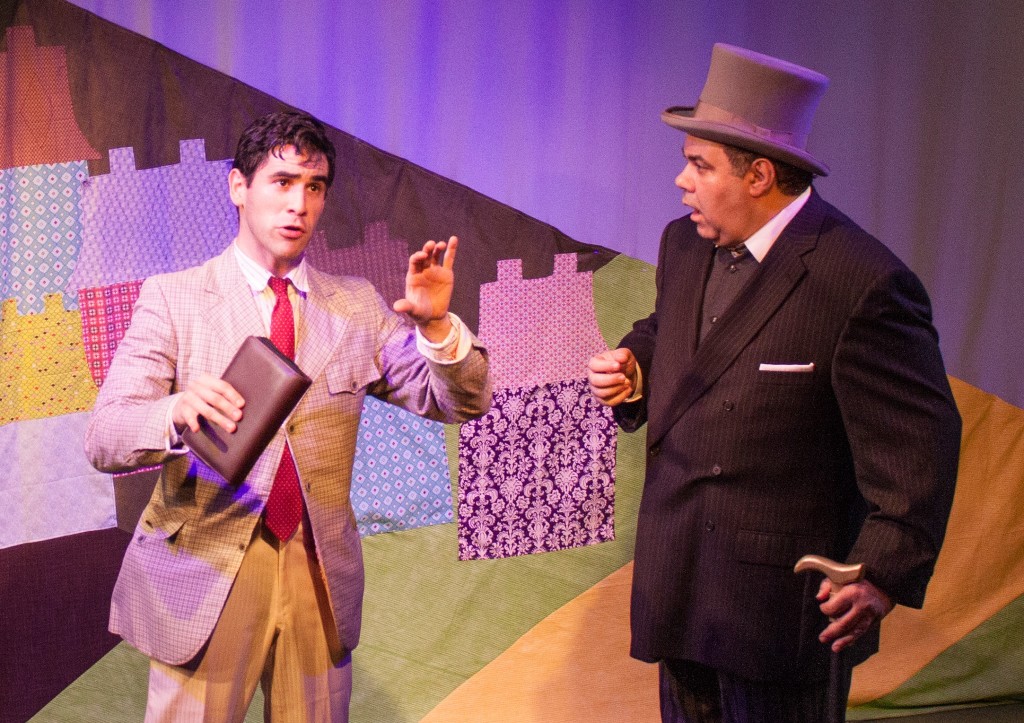 Kathy Burke Egloff concludes 2013, an excellent year for her, with her spot-on Mrs. Paroo, crooning “Gary, Indiana” with Winthrop and maintaining a reliable and subtle Irish accent in sharp retorts.

Despite several community theater gigs, Tamar Smithers is a tad young to portray Mayor Shinn’s fatuous, culture-loving wife Eulalie Mackechnie, but her musical chops serve her well in the appropriately bombastic “Columbia, Gem of the Ocean.” She and her clucking Pick-a-Little Ladies, led by Hillary Taylor, Mary Nickson and Elaine Koh, are well-costumed by Nikki Delholmme.

Kevan Spencer joins Kevin Necciai, Aaron Ruiz and Dan Williams for the barbershop quartet in their rendition of “Lida Rose” and “It’s You.” Svoboda is to be congratulated for getting that authentic blended sound from youngsters who may never have heard close harmony before being cast. And Charlie Burns leads a five-person ensemble that we never see. His one trombone player, Melissa Gardner, fills in deftly for the missing 75.

This production runs through Dec. 21.