One of the hallmarks of artistic director Timothy Bond’s era at Syracuse Stage is never taking the familiar for granted. The audience demand for Charles Dickens’ A Christmas Carol remains constant, just as it does for Tchaikovsky’s The Nutcracker or Handel’s Messiah. After a red-hot jalapeno like last month’s Wajdi Mouawad drama Scorched, people have the right to ask for comfort food, but not served with condescension.

The artistic task is to present dialogue and episodes everyone in the theater already knows, but make them feel fresh, even surprising. Credit for accomplishing this must be shared widely, but most of it goes to A Christmas Carol’s director Peter Amster and the backstage staff here on the scene. 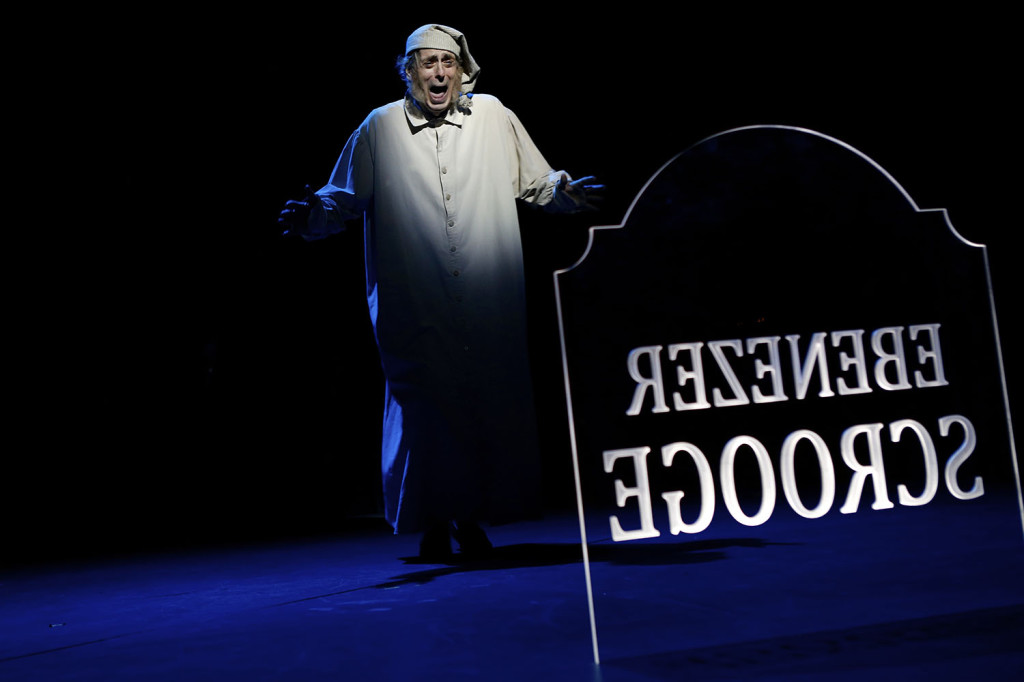 Much has been made, perhaps too much, of playwright Romulus Linney’s tweaking of the script. Linney (1930-2011), probably best remembered as actress Laura Linney’s father, was more admired than famous. His A Lesson Before Dying (February 2002) was well-received at Syracuse Stage, as were a half-dozen other works by different local companies. He takes the small boy Scrooge calls to on Christmas morning, now called Boy Who Sings Carols (Gerard B. McCrohan), and makes him a recurrent character, appearing even before the famous opening line, “Marley was dead.” Key sections of dialogue have been brightened and sharpened, notably the scene where young Scrooge (Doug Pemberton) bungles his relationship with lustrous Belle (Avery Bryce Epstein), his heart’s true desire.

More instrumental in re-envisioning Carol are scenic designer Linda Buchanan’s ingenious set and Thomas C. Hase’s superior lighting. At first we see what look like stark, bare, gray walls, possibly representing the metaphysical anomie of Victorian industry and commerce. Those walls are translucent, we learn, with projections at different times of falling snow or the stars of the cosmos. Falling silently out of the flies are suggestions of different spaces we must travel: the front door of Scrooge and Marley, the office indoors, Fezziwig’s party hall, the Cratchits’ cramped digs, but bigger than them all is Scrooge’s gigantic four-poster bed. The Brobdingnagian beams, one running the length of the stage, look like mahogany but are lighter than balsa. Ghostly creatures climb out of the bed’s upper reaches. A Christmas Carol, we are never to forget, is a dream play.

Part of a tradition going back to 1999, A Christmas Carol is a co-production of Syracuse Stage and the Syracuse University Drama Department, augmented by large numbers of youngsters recruited from the community. Happily, no visible lines separate the professionals from the students and the children, although the Equity people lift the heaviest burdens. 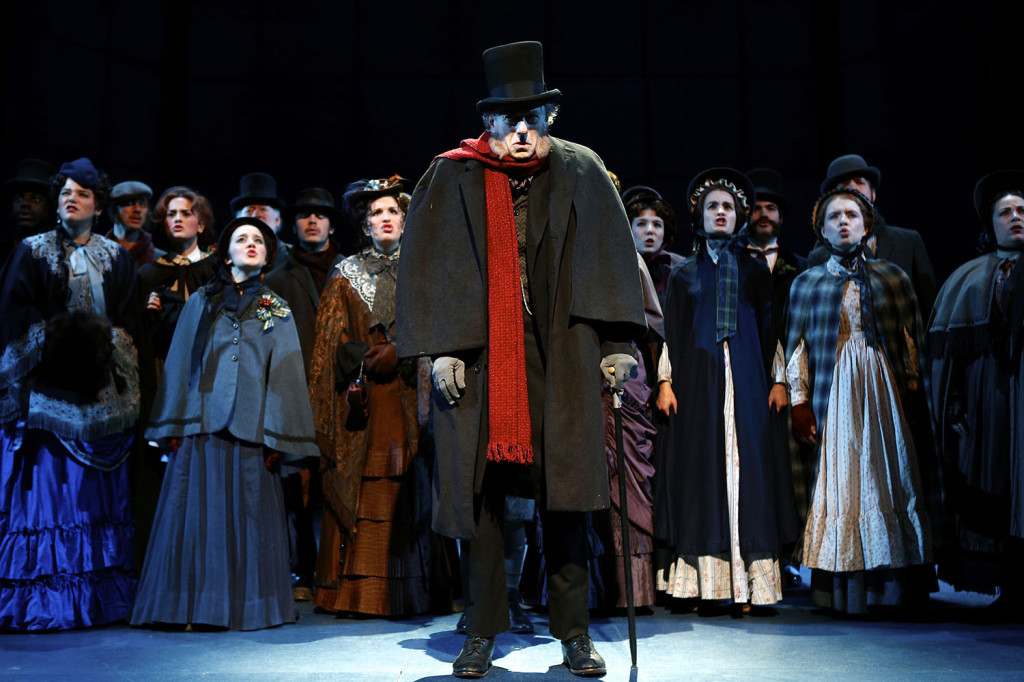 According to his bio, actor Steven Hendrickson has played every male role in different productions of A Christmas Carol and is just getting around now to Scrooge. He passes an important test with his first “Bah, humbug,” sounding as though his Scrooge had just thought of it. His abrasive edge softens earlier than we are used to, however. Hendrickson’s native comic talent allows Scrooge’s sunnier side to emerge ahead of schedule, when the character peers through the drapes on his bed to see the commotion, as if he were looking through the curtain of the proscenium.

Collaboration with SU Drama brings in the welcome talents of faculty choreographer Anthony Salatino. His big production number comes in the first act, a rousing, folk-sounding country dance at Fezziwigs’ place in the remembered good old days. A single musician, cited as Joe the Fiddler (Joe Davoli), provides all the instrumentation, along with choral singing, in 14 musical selections. Most hark back to the pre-industrial past, like the Wexford, Sussex and Country Carols, excepting the more recent Ukrainian Bell Carol and music director Dianne Adams McDowell’s original “O, Little Boy Lost.”

Costume designer Tracy Dorman has twice the work she would have borne in another production. With the set being spare much of the time, she has to remind us that the date is 1843, with top hats and long skirts. Given that the audience wants a good time, many of the more privileged characters must look gorgeous, but as the script speaks of class division, many characters appear as if they are in want. Along with that, more than half the players double up in roles, and she has to make them look different in each appearance.

Among her more successful efforts along this are separating the two incarnations of tall, bald-pated Peter Van Wagner, one of the most distinctive presences in the cast. First he is the ultra-jolly Fezziwig the generous party-giver, and, a few moments later, still with high spirits, Van Wagner is the keen-eyed Ghost of Christmas Present, pointing what Scrooge does not wish to see.

Costumer Dorman contributes mightily to two moving if short scenes. One is the genuinely scary entrance of chain-laden Jacob Marley (Steve Brady), up from a trap door. Later Brady will be the scavenging Old Joe. 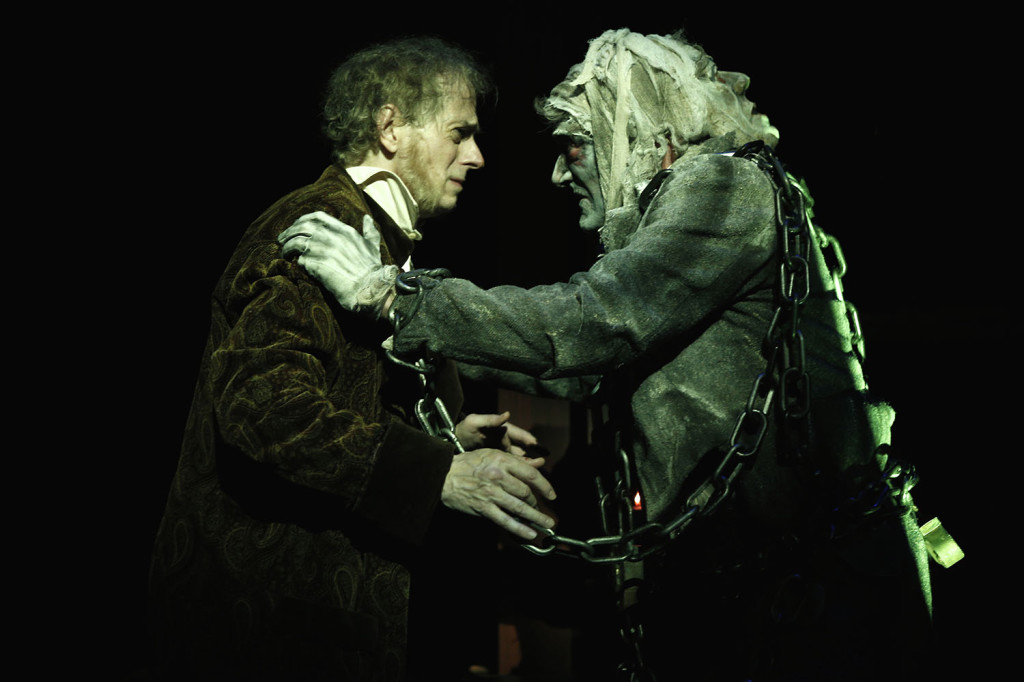 The most ghostly appearance of all emanates from Erin Walsh as Christmas Past. That role is commonly assigned to a beautiful woman, but in Dorman’s hands Walsh is all in pale gray, an 18th-century outfit with powdered wig and knee breeches, ominously enigmatic. Later Walsh is transformed into a businessman, with a top hat and a mustache.

The costumes for the Cratchits–Bob (Nick Corley) and his wife (Leslie Noble), as well as the children (Dominic Perrone, Emily Naughton, Marcea Bond and Matthew Caraccioli)–portray a misery with light hearts. Hunter Metnick’s Tiny Tim has the smallest body on stage, albeit with one of the most resonant voices.

A Christmas Carol has stayed popular and relevant after 170 years for good reason. Scrooge’s early hatred of altruism is still heard in the land and in the halls of congress. Dickens tells us hard hearts can be melted even in the depths of winter.

This production runs through Dec. 29.

Are you Getting Scrooged this season? CLICK HERE TO VISIT SYRACUSE STAGE ONLINE!

SALT Nominations
All I Want for Christmas Is
To Top