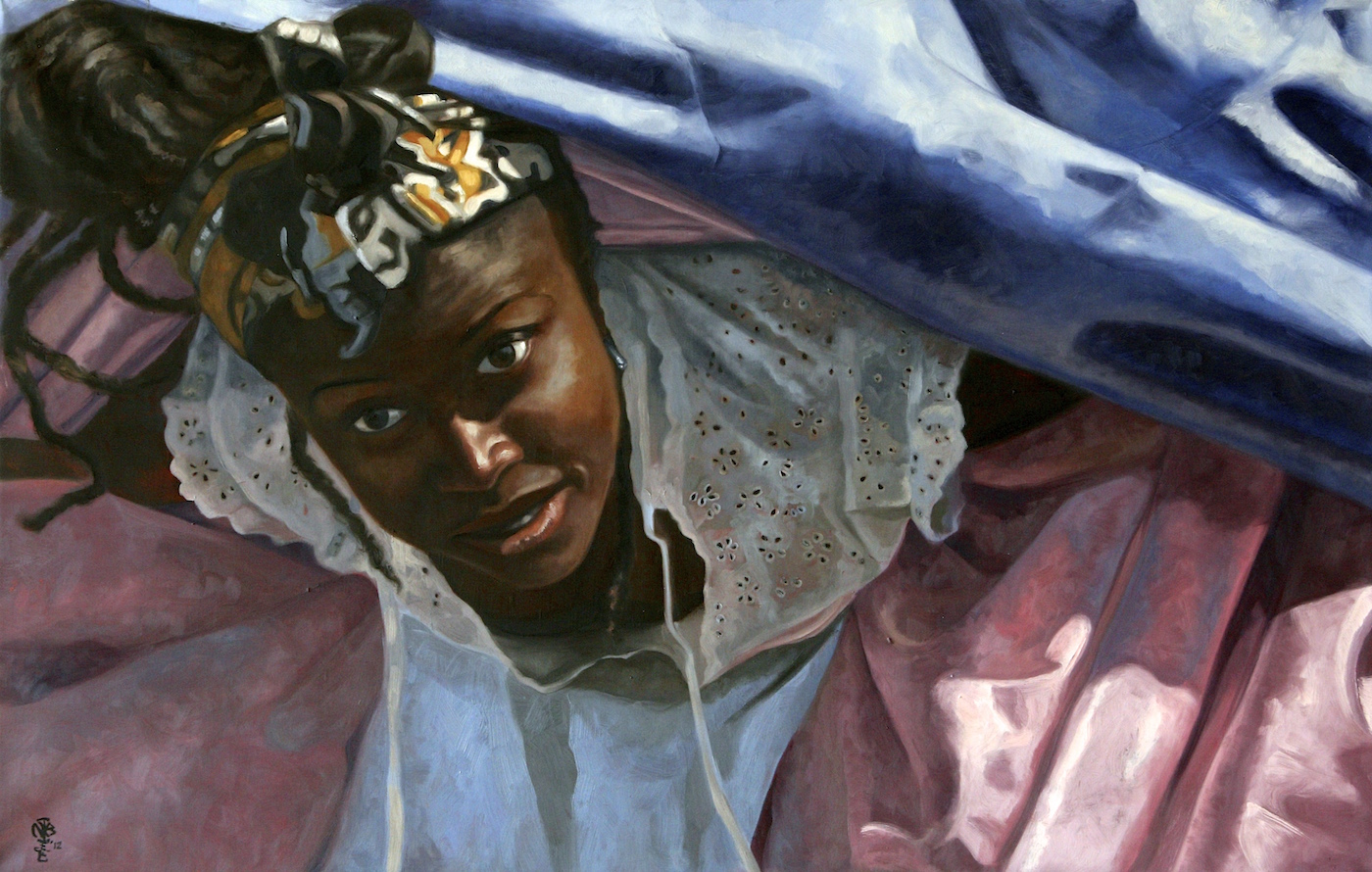 The Community Folk Art Center hosts As Bad As I Wanna Be: Reimaging Black Womanhood, featuring work by three artists whose pieces both reflect on their own experiences and discuss gender, race and cultural context. To initiate that discussion, each has selected varying visual approaches.

Delita Martin, for example, has two pieces that touch directly on family life, using familiar objects to communicate that experience. “Mother of Mine” combines a depiction of an elderly woman and two coffeepots.

The artist also does large, bold portraits of African-American women such as “Felise in Blue,” a work created with conte crayons, acrylic, gelatin painting and hand-stitched fabric. It encompasses abundant blue color, fabric on canvas, and a merging of the piece’s elements; Felise’s face is decorated with visual patterns that appear throughout the work. 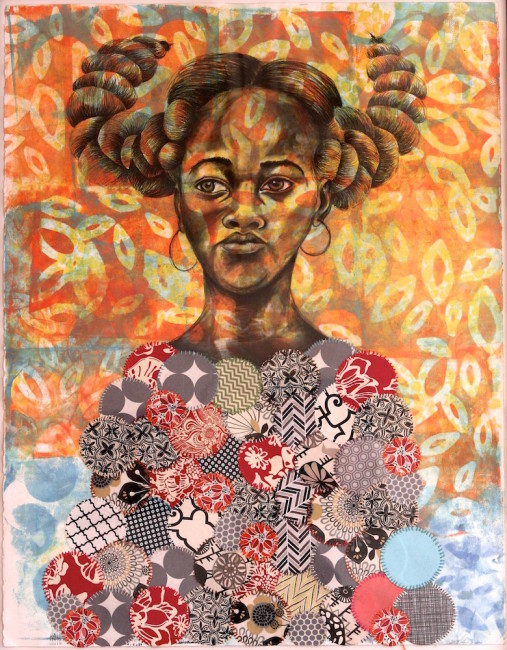 The artist uses the same media in creating “Quilted Angel,” an artwork emphasizing orange and gold colors. It’s a striking piece, prompting a second or third look by a viewer. In “The Watcher,” the subject looks directly at viewers. This isn’t a mere visualization of a stare-down. Martin is communicating more complex ideas, with one possibility being the perspective people bring to everyday encounters.

Artist Nina Buxenbaum is a woman of biracial heritage, the child of African-American and German-Jewish parents. Her pieces, done in mixed media or oils, stress the notion that identity is complex. Several of them portray two women, as in the work where a white woman touches the hair of an African-American woman. In a second work, two woman interact; very near them there’s a blue-colored doll.

Another oil-on-linen artwork, “Reflection,” portrays a woman deep in thought, while another references conflict, with one woman trying to strangle another. These, and other works, aren’t suggesting that Buxenbaum’s identity, or that of any person, can be neatly divided into two selves. Rather, they point to the issue of assumptions made simply on the basis of a person’s appearance. Moreover, while the artist’s own experiences certainly influence her work, there’s a larger conversation going on, one exploring how identity is formed.

Artist Kenyatta A.C. Hinkle has works from three of her projects on display. One piece, “Tituba The Two-Headed Woman,” refers to a slave who gave key testimony leading up to the Salem witch trials in Massachusetts. Among other things, she said that dogs, cats and rats ordered her to do evil things. Tituba later repudiated that confession, saying she gave testimony only because her master beat her. Hinkle’s artwork has an absurdist flavor but is dead serious about Tituba’s status as a devalued person in 1692 Salem.

Hinkle also references her Kentifrica Project, a body of work based on her growing up in Louisville, Ky., and having connections to African ancestors. She invented the idea of Kentifrica as a place with its own music, cuisine and artifacts. This isn’t a pure exercise in fantasy; Hinkle has utilized Kentifrica as a starting point for talking about heritage and culture. The current show includes a portrait of Delita Keneyenye, a Kentifrican scholar.

In a third project, “The Uninvited,” Hinkle has reworked a series of postcards made in France many decades ago, when that nation was a colonial power in Africa. The postcards depict African women as primitives.

In one instance, she inserted material that hangs down on the subject’s face and functions as a mask. In “Metropolis,” Hinkle placed terrain, as seen in a map, over the postcard. Finally, “Infestation” has correction fluid sprinkled over a photo, critiquing the postcards’ perspective and impact. The pieces develop a common theme: Those who control cultural imagery have significant power.

As Bad As I Wanna Be presents works by three emerging artists, all of whom who have developed their own visual vocabularies. It takes a while to get acquainted with their pieces, and that’s particularly true of Hinkle’s artworks, which come from three of her projects. Nonetheless, the exhibition is meant to challenge viewers and to showcase artists who take nontraditional approaches.

For Whom the Bells Toll
Burger Time
To Top