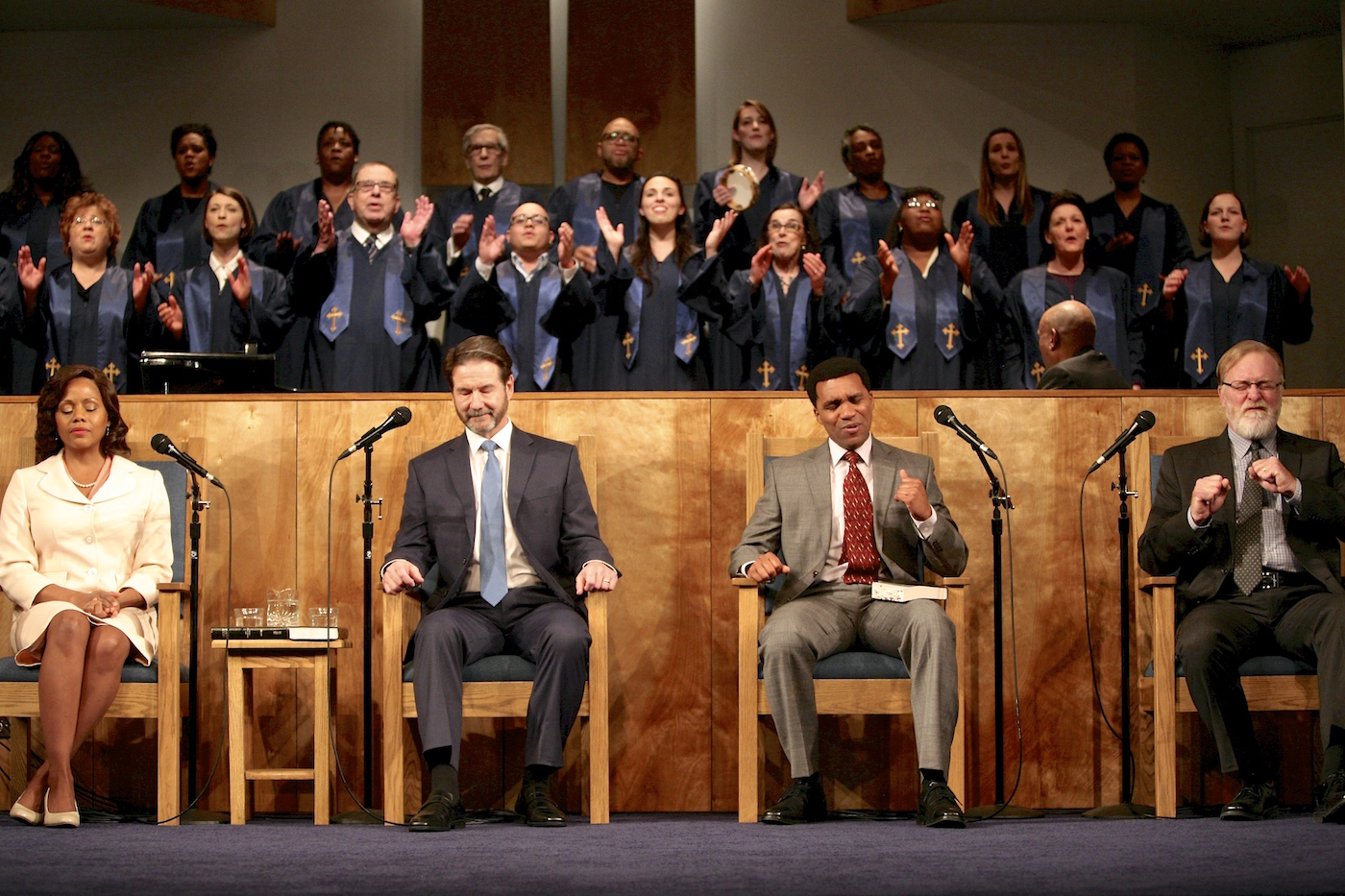 For the first 10 minutes of Lucas Hnath’s prize-winning drama The Christians, the Syracuse Stage audience is attending a church service. Or what feels like one.

A 32-member choir led by Michael G. Keck warms up the congregation with almost-familiar hand-clapping hymns whose words appear on panels at left and right. We could join in. The rhythm is contagious, even if Keck just wrote the music himself.

What the playwright is telling us, emphasized by Tim Bond’s heartfelt direction, is that a house of worship is also a theater. Nearly all dialogue, even when intimate and personal, is spoken into microphones. Words are expected to resonate around the room.

The church we see, with polished wood panels created by scenic designer Matt Saunders, would never be confused with the cathedral at Chartres. Instead, it resembles the mega-churches of clergymen like Joel Osteen, of Lakewood Church in Houston, the largest Protestant congregation in the United States. Osteen, known as the “smiling preacher,” has been known to go easy on the hellfire and damnation and has recently emphasized the gospel of prosperity.

Pious playgoers have reason to be wary of Hnath’s intentions, given the roasting of the Latter-day Saints in The Book of Mormon. Further, there is reason to complain that a drama with the expansive title of The Christians deals with contemporary Evangelicals, labeled “heretics” by secular critic Harold Bloom, rather than older denominations.

Hnath (pronounced “Nayth”) is neither a skeptic nor a proselytizer. His drama is focused on the unique profession of all Christians, of whom Evangelicals are but one instance. Besides, Evangelicals have enjoyed the greatest growth nationally in recent decades. Their interpretations are on the rise.

Growth, as it happens, is the introductory theme of the sermon by Pastor Paul (Paul DeBoy). The church he has founded began 20 years earlier in a shabby storefront, but after exponential numbers joining the flock and a monumental building program, he has reached a conclusion. With all the debt now paid off, it’s a time for rejoicing, and a time for Pastor Paul to share reminiscences and insights.

Pastor Paul speaks with mellifluous assurance. He makes for easy listening, with none of the exhortations of famous American Protestant preachers, like Jonathan Edwards’ “Sinners in the Hands of an Angry God,” or anything by Henry Ward Beecher or Billy Sunday. Instead, he tells of how he met his wife, the most beautiful woman he had ever seen. This leads to the lesson of the day: his description of the heroic self-sacrifice of a boy in an impoverished Third World country. He was Christ-like without having accepted Jesus.

Hnath’s anecdote might be fiction, but it runs parallel to a theological question raised in contemporary seminaries: What to make of virtuous, Christ-like figures, such as Mohandas Gandhi, who were not Christians themselves?

The fullness of Pastor Paul’s analysis of this dilemma and his subsequent recommendations cannot be revealed. He clearly wants the church to remain a loving community given to ethical behavior and good works.

Additionally, his reading of important scriptural concepts reflects the gimlet-eyed interpretation of ancient texts that has arisen in recent decades. He feels he knows what he is talking about and is not a doubter of divinity. With his tone of sweet reasonableness and his high esteem in the congregation, he can look forward to a polite response.

Not for long, however. The associate pastor Joshua (DeLance Minefee) begins with a polite and low-keyed reaction to the sermon. Under Bond’s direction and with Minefee’s skill, we quickly deduce a subtext Pastor Paul has ignored: The younger man has long been chafing under the older man’s leadership.

Thus far the conflict looks personal as another church elder, Jay (Ames Adamson), a conciliatory figure, searches for a middle ground. All these figures speak into hand microphones, signaling that they are public figures.

Then we hear the first candid voice, one without a microphone or any hint of oratory or measured rhetoric. This is a previously unseen congregant named Jenny (Julie Jesneck). She is shaken to the core that Pastor Paul’s seemingly enlightened and even progressive dismissal of some of the church’s more rebarbative beliefs will rob her of the uniqueness of Christianity and the faith that she clings to in warding off despair. Like the suffering citizens who confront scripted politicians at town hall meetings, she is not to be turned away.

Jenny awakens a second woman who has remained silent until this point. Pastor Paul’s decorous wife, Elizabeth (Erika LeVonn), has been on the dais for more than half the play, signaling through her body language that she has been involved with everything that has been said. Casting a striking beauty as Elizabeth is no mere vanity. She pulls our eyes toward her reactions even when she is not speaking. By this time the 32-member choir has also stormed out, and Pastor Paul’s vision of a debt-free congregation is in ruin.

Secular audiences, heirs of Voltaire and Diderot, may be slow to embrace the conflict in The Christians. Yet we continue to study religions we do not practice, and read Dostoevsky, because there we can confront the questions raised here: How do we know what we believe and why do we believe it?

This is Syracuse Stage producing artistic director Tim Bond’s farewell production, one of his smoothest ever. Playwright Hnath does not specify the ethnicity of The Christians, but Bond has inconspicuously allowed it to incorporate the African-American experience. Black faces are often found in mega-churches, comfortably integrated. Michael G. Keck’s black-themed original music might find a continued life in real places of worship, be they black, white or mega-churches.