Nearly 150 years after it was banished, slavery–the mass involuntary servitude of millions–has become a fresh theme for dramatic exploration. It’s not that we forgot, but rather that we had been glossing over some details. At the movies, Steven Spielberg’s Lincoln reminded us that passage of the 13th Amendment, ending slavery, was by no means a popular slam dunk, while Twelve Years a Slave spelled out unrelenting daily humiliation from barbarous to petty. Matthew Lopez’s 2006 drama The Whipping Man, at Syracuse Stage through Feb. 16, tightens the focus to three men in a single household, bound by multiple deep ties. It dramatizes what could have been said on the first day two of them were freed.

Severely wounded at the Battle of Richmond a few days earlier, gray-clad soldier Caleb DeLeon (Gregory Perri) staggers back to his ruined mansion on a dark and stormy night where he is greeted by the dignified, paternal retainer Simon (Jonathan Peck). Seeing that Caleb’s wounds are gangrenous, Simon recommends swift and painful action. Arriving somewhat later is the younger somewhat rascally John (Biko Eisen-Martin), who takes a more irreverent tone toward the white man: “The war is over. You lost. We won!”

As for the larger picture of the end of Civil War, we are so well-informed that playwright Lopez, with the help of scenic designer William Bloodgood, has an easy time with the exposition. The Palladian fan light with broken panes, the staircase with shattered balustrade, the ruined furniture, the dirt–yes, we know we are in what was once a mansion now brought to ruin. Lighting designer Darren McCroom enhances the gothic tone, assuring us some shocking material will be coming. It’s Friday, April 14, 1865, not only five days after the surrender of the Confederacy, but also the day Abraham Lincoln was shot, which we can expect to be announced shortly. We will also learn that it is Passover.

We also hear plenty about absent persons, such as Caleb’s dreaded father, a feared slave master, who had fled the scene before advancing Federal troops. Caleb yearns for a woman named Sarah, a common enough biblical given name. It is also the name of Simon’s missing daughter.

It’s a half-hour into the action before we hear any reference to the characters’ Jewishness, which comes with citation of the word “Torah.” In the conception of playwright Lopez, a Puerto Rican gentile, the DeLeons are a Jewish slave-owning family and they have instructed the entire household in their faith. In a useful program note, Rabbi Ralph Dalin of San Diego observes that many Jewish audiences may find that Lopez’s invention causes them “not a little discomfort.” But there were at least 25,000 Jews in the Confederacy, those in Charleston did indeed hold slaves, and a man named Judah Benjamin was in Jefferson Davis’ cabinet. 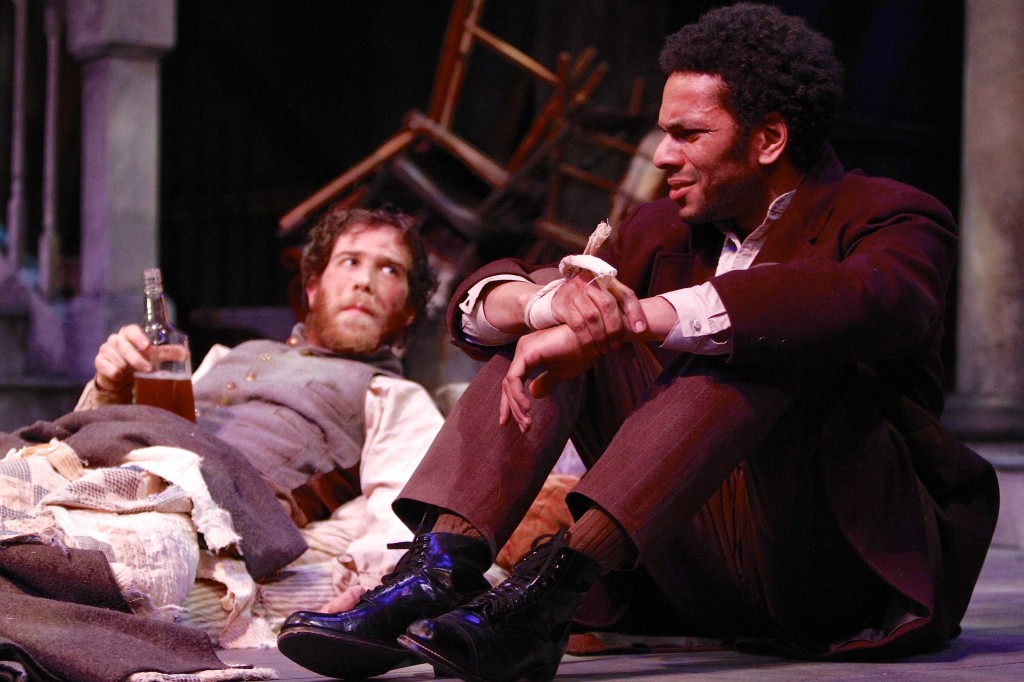 Lopez has said in interviews that he is not writing history, despite his fondness for Civil War re-enactments, and makes no attempt to use 1860s language. Instead he is writing a contemporary play projected into the past. Thus his expropriation of tradition not his own is neither historical (even if there was such a household in Richmond) nor sociological but rather literary. This means that master and slaves are members of the same minority in a monolithic intolerant state. Both owner and property are linked with the Children of Israel held in bondage in Egypt, yearning to be free in the spirituals, “Go Down, Moses” and “Let My People Go.” Together they recite the Haggadah, the Passover narrative about delivery from slavery.

Consciously or unconsciously, Lopez silently alludes to earlier dramatic and cinematic treatments of slavery. As an example, when Caleb refuses the suggestion that he attend to his infected leg at a still-functioning hospital, Simon and John are stuck with the task. An amputated leg without anesthesia calls up a memorable scene in Gone with the Wind. Simon’s authority and competence in taking charge is meant to be a refutation of Butterfly McQueen’s much-repeated flustering at the birthing of babies. How the unlettered Simon knew just where to saw and which arteries had to be stanched with rags is not explained. The always agile John assists with plenty of whisky, for external disinfection and internal comfort.

After the Passover Seder on the night of the Lincoln assassination, in which black and white Jewish men participate, we enter a period of truth-telling in which the play’s various tensions, not all addressed here, become the substance of powerful speeches. Simon tells Caleb he could not love Sarah if he owned her. Master and slaves already have unwanted blood ties, as on the Jefferson plantation. Ownership sanctions the master’s even deeper misuse of his property, as with the whip of the title. In the play’s most startling moment, Simon displays the record of his punishment.

Director Timothy Bond selected Jonathan Peck for the role of Simon without bothering to audition others. The result is a wholly original creation. His Simon is a slave who learned refinement and discipline (the word seder means “order”) by working in the house, but whose chains never shackled his mind. By adopting the faith of his master’s family, he knows deliverance is possible even when it looks unlikely. Lopez’s script allows him passionate speeches to refute the fiction of benign bondage still touted by contemporary shills for the Confederacy.

The other slave John, first called “Nigger John,” is written as Simon’s opposite number, but that’s not how Bond directs him. A teasing playful figure, who taunts Caleb and Simon at his entrance, John is a boozing mischief-maker given to witty wordplay. On paper John is an iteration of the trickster figure, found universally in oral tradition, like the Yoruba character Elegba in T.A. McCraney’s The Brothers Size. Bond and Biko Eisen-Martin turn John into an earnest, sensible figure, which also drains much of the fun from the first act.

Gregory Perri’s affecting empathetic Caleb commands our attention, but he’s not supposed to make us laugh.

Audiences should not be misled by the seeming contrivance of having Jewish slave holders. The Whipping Man, one of the most widely produced plays in regional theater, is a hard-hitting drama on issues whose legacy is still with us.