David Ives’ Venus in Fur is a play about two people at an audition for a different play with the same title. The play to be produced is an adaptation of Leopold Sacher-Masoch’s 1870 erotic novel, Venus in Fur, which gave us the word “masochism.” Leading the audition is the playwright and first-time director Thomas Novachek (Brandon Morris). The actress trying out is named Vanda (Maddie Jo Landers), which just happens to be the name of a character in the novel and the adaptation Thomas is producing. Given that David Ives (All in the Timing, Mark Twain’s Is He Dead?) is America’s most playful dramatist, these are but hints at the reversals of expectation and intellectual pranks that are about to unfold.

The action of Ives’ play–running through Sunday, Feb. 9, at Ithaca’s Kitchen Theatre Company–begins with an assertive show-biz cliché. In a shabby office, authentically designed by Tyler M. Perry, somewhere in New York City, dejected Thomas is complaining to his unseen girlfriend about how miserable the auditions have gone, how stupid and untalented the applicants were, and that he is ending the day empty-handed. Just as he is ready to quit, in stumbles the breathless, confused Vanda, who’s been stuck en route and missed the appointment. The idea that she might play a Viennese aristocrat appears hobbled by a volley of profanity and her offstage speech patterns, a mix of Valley girl and trailer park. She’s also a drop-dead gorgeous peach-and-cream blonde, but with her klutziness we don’t notice until quite a while later.

After claiming just to have glanced at the script, Vanda pulls a battered copy from her bag as the audition begins. She suggests that the lines call for a trans-Atlantic accent, and she proceeds to deliver a plummy one that could well fit in an episode of Downton Abbey. Breaking out of character, she comments on her performance: “Hey, that’s acting, ain’t it?” She then cajoles Thomas to read his own dialogue, but he protests that he’s a writer and not an actor. At first his words are lifeless, but with Vanda’s demands, he gets into it, eventually assuming a voice that sounds like an American Ronald Colman.

We now recognize that to the world of Sacher-Masoch we are adding Luigi Pirandello, in that the decadent Austrians of the novel have come alive on stage and are changing places with and bumping into Ives’ contemporary American characters. And they are all talking about the same things: gender and power. Instead, make that sex and dominance. Delineating the sharp lines between characterizations is where director Rachel Lampert demonstrates her mastery. It’s not just a cast of the head or the roundness of a vowel; we always know which Vanda and Thomas are which.

Lampert’s sure hand is also evident in the successive manifestations of Ives’ characters Thomas and Vanda, who end strikingly different from the people we begin with. Thomas’ claim not to have put himself into Sacher-Masoch’s character is proved to be bogus. Vanda, meanwhile, discards personae the way Salome shed those veils. She’s never nude before us, and we’re not sure until the end what all is underneath the different gowns and black leather bustier. 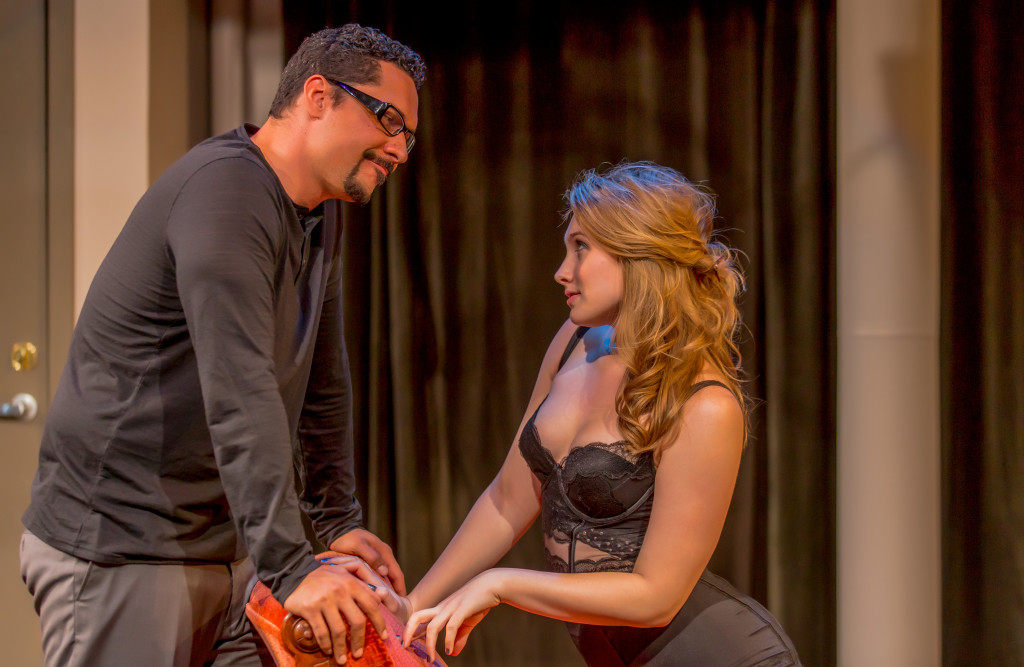 A knowledge of Sacher-Masoch is hardly necessary to getting into Ives’ play and may well be an encumbrance, except that his evocative title really hits the mark. In interviews, Ives confesses to a low opinion of the German novel, whose prose he describes as “Teutonically leaden as velvet sandbags.” He had earlier thought of Pauline Reage’s erotic Story of O, in which the female half of the dialogue is thrilled by complete domination. Sticking with the Sacher-Masoch title, however, allows for ambiguity and ambivalence. The distinction between these two concepts introduces much wordplay between the two characters when we’re not sure which is headed up.

Maddie Jo Landers, whose television credits include HBO’s Boardwalk Empire and the CBS procedural Person of Interest, makes a smashing Kitchen debut. Her world-class beauty is not simply an ornament but a weapon in Vanda’s allure and dominance. But even if we were listening to the show on the radio, her ravishing vocal variety would still knock us over. Brandon Morris, who has been Kitchen’s favorite hunk twice, in Frankie and Johnny in the Clair de Lune and The Motherfucker with the Hat, restrains his macho sexiness but we know it’s there when he needs it.

Ives’ Venus in Furs can securely be classed as a racy dark comedy. There are dozens of hilarious lines not soiled by quotation here, and moments of ecstasy to quicken the pulse of the flaccid.

It’s also thematically more ambitious and deeper than it may sound. We already knew that discussion of the battle of the sexes is inexhaustible, and Ives’ portrayals invite comparison not only with 19th-century masochism but also such lasting items as the complete plays of August Strindberg, especially Miss Julie or even the Epic of Gilgamesh, where the Goddess of Love first shows the male who’s boss. Local couples who brave the wintry roads to Ithaca are guaranteed an exciting conversation for the drive home.

French Kisses
The Whipping Man at Syracuse Stage
To Top