Familiarity is both a blessing and a curse. More than 66 million people in 42 countries have already seen Alain Boublil and Claude-Michel Schöenberg’s pop opera Les Misérables. Quite a few of them live in Onondaga County, including the audiences that have been selling out the Baldwinsville Theatre Guild’s productions that run through Feb. 8.

On the good side this allows audiences to follow the anfractuous book that scrunches down 1,260 pages of Victor Hugo’s action-packed 1862 novel into three hours of agony, music and dance. It takes 35 players, many in multiple roles, to get the story out. The bad part is that Les Miz has been such great professional box office that many playgoers are used to expecting top voices for the heartfelt, and sometimes thunderous, solos. To meet this need, director Korrie Taylor has rounded up a host of powerful troops for her troupe.

Barely past age 30, Korrie (formerly Strodel) Taylor has only been on the scene a short time but has appeared widely as a performer, from Shakespeare to musicals to farce. Although it is the Baldwinsville Theatre Guild that provides her this stage, her knowledge of who’s out there has allowed her to draw talent from more than six different organizations. In reading her program, we see that several young singers bring operatic experiences as well as appearances with symphony orchestras. Along with those, she has contracted demanding musical director Abel Searor, who leads a pit symphony (really) of eight players in the blood-pumping score.

The two male leads mark a visual as well as vocal contrast. We get a measure of their vocal abilities in the nearly tuneless recitative that precedes the big solos. Our sentiments, of course, are pinned to the saintly, misused convict Jean Valjean (tenor Henry Wilson). Long-haired, bearded and mid-sized, Wilson can readily embody tenacious resolve as well as vulnerability that have served him well in previous outings as both Judas and Jesus in Jesus Christ Superstar and John Wilkes Booth in Assassins. His signal solo, “One Day More,” delivers all the passion and hope that is rooted in Hugo’s text, but impressive in a different way is “Bring Him Home” with the rising lyrical falsetto. 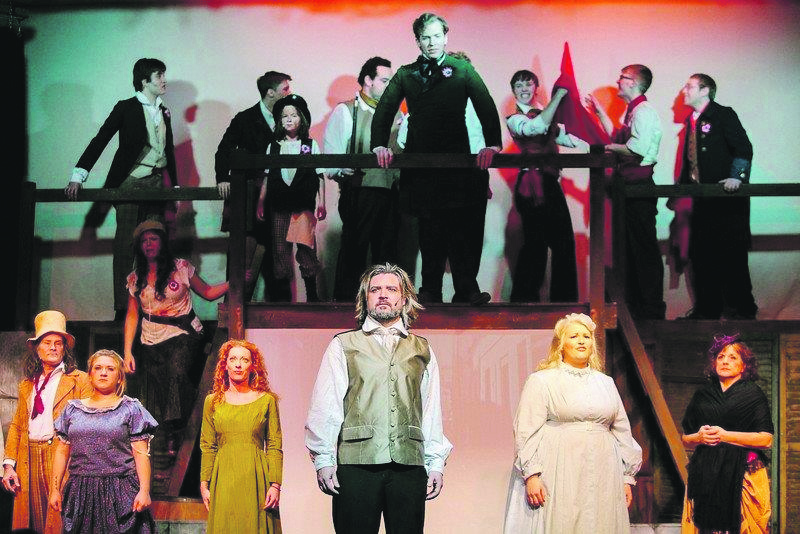 His opposite number, one of the most favored villains in musical theater, is the dark-browed Jason Bean as the demonically obsessive Inspector Javert. His solo “Stars” wins applause, and makes one regret he could not have dubbed Russell Crowe’s efforts in the recent movie.

After his escape Valjean encounters the innocent factory worker Fantine (Danan Tsan, formerly Healy), who’s forced to sell her long blonde tresses and, later, her body, to keep her head above water. Her solo, “I Dreamed a Dream,” now perhaps the best-known item in the show because of Susan Boyle, introduces musical themes heard throughout the show. This puts Tsan to the highest expectations of anyone in the cast, and when she delivers so early in the action, the entire production takes on kind of an enhanced verve.

Fantine’s daughter Cosette (Julianna Bellso), the child whose drawn face from the 1862 novel is the usual illustration for Les Misérables’ poster and programs, is unwisely entrusted to the nogoodnik Thenadiers. Incautiously, Valjean entrusts Cosette. Vicious, greedy and smelly, the Thenardiers misuse Cosette and so Valjean adopts her, but not before the couple introduce some welcome comic relief. Horrible as the couple may be, we sense their comic potential as the very thin Monsieur (Josh Taylor) and the somewhat round Madame (Michaela Oney) cut a kind of Laurel and Hardy silhouette. Their rollicking “Master of the House,” this show’s answer to West Side Story’s “Gee, Officer Krupke,” is an earworm that rattles on in the mind as long as any of the most heartfelt solos. We’re supposed to loathe the Thenardiers, but Taylor and Oney are having so much fun we’re actually amused every time they show up. 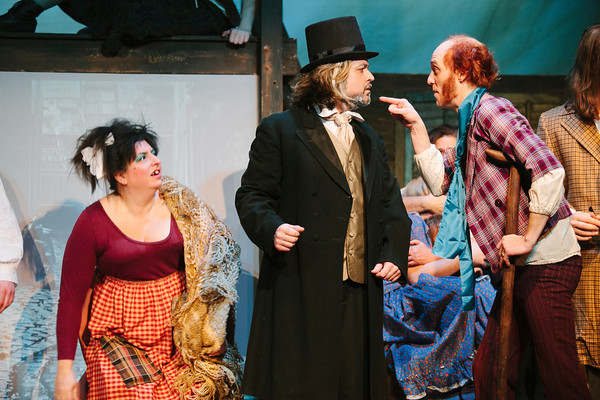 The Thenardiers’ daughter, Éponine (Ceara Windhausen), grows up with Cosette (very pale soprano Jennifer Pearson), and they begin to drive the action before the end of the first act. They are drawn to the student revolutionaries and are both in love with the leader Marius (Liam Fitzpatrick). This juncture allows for more of the most repeated songs, such as the quartet of Cosette, Éponine, Marius and Valjean (always hovering near the action) “In My Life.” Later, minus Valjean, comes the excellent trio, “A Heart Full of Love.”

Windhausen, Pearson and Fitzpatrick have been emerging community stars in recent years, making strong impressions at every outing. Fitzpatrick has even had his own one-man cabaret. Not that they are upstaged, but the real discovery in this production is powerhouse tenor Paul Thompson as Enjolras, making his debut here. At his introduction, Enjolras is a sidekick, but he gets the most heart-thumping number of them all, “Do You Hear the People Sing?” It’s Les Miz’s equivalent of the Marseillaise.

Others in the nearly three dozen players give individualized performances so that your eye follows them from scene to scene. The most striking of these is tiny, klaxon-voiced Sera Bullis as the street urchin Gavroche, who leads a chorus of beggars in the first act. They are central to the whole show: Les Misérables in French means “the poor.”

A community theater production at Baldwinsville’s Presbyterian Education Center is not supposed to look like one whose ticket costs $250. But the team of costumers led by Stephanie Long have done an admirable job of evoking, especially with nuns’ wimples and officers’ uniforms, with the entire cast repeating motifs and designs found in 19th-century illustrations.