The panel for projected titles in the Mulroy Civic Center’s Carrier Theater for Maria de Buenos Aires begins with a disarming piece of consumer advice. It’s a quick message, something like, “Don‘t expect to discern every nuance by what you read here.” For this Syracuse Opera production, running through Sunday, Feb. 9, it could mean two things, both useful. One is not to be distracted up here from what’s happening on stage. Or, secondly, it could mean that the words found in the lyrics and the surreal plot do not give us what Maria is really “about.”

Instead we are invited to let the lush fullness of the visual and rhythmic expression lap over us. The Argentine tango, perhaps even more than other forms of music, is directed to the right brain. Treat it like an algebra problem where X has to have a definition, and the allure vanishes.

The name of Astor Piazolla (1921-1992) might still be too obscure for a Jeopardy! question, but he remains big time in Argentina and enjoys worldwide prestige. While never neglecting the tango’s roots in African and native cultures, he wanted it to be seen as more profound than mere dance music. In this he resembled George Gershwin with jazz. An admirer of Bach, he studied composition with Nadia Boulanger in Paris and was pals with Gerry Mulligan in New York City. He was also a champion on the bandonéon, a kind of accordion, here heard as a featured instrument.

In creating Maria de Buenos Aires, the “tango opera,” he was aiming well above a nightclub act, a song cycle or even a cantata. Accessible as Piazolla’s score might be, this demanding music calls for richly trained voices with emphatic dramatic presence, which Syracuse Opera has delivered. 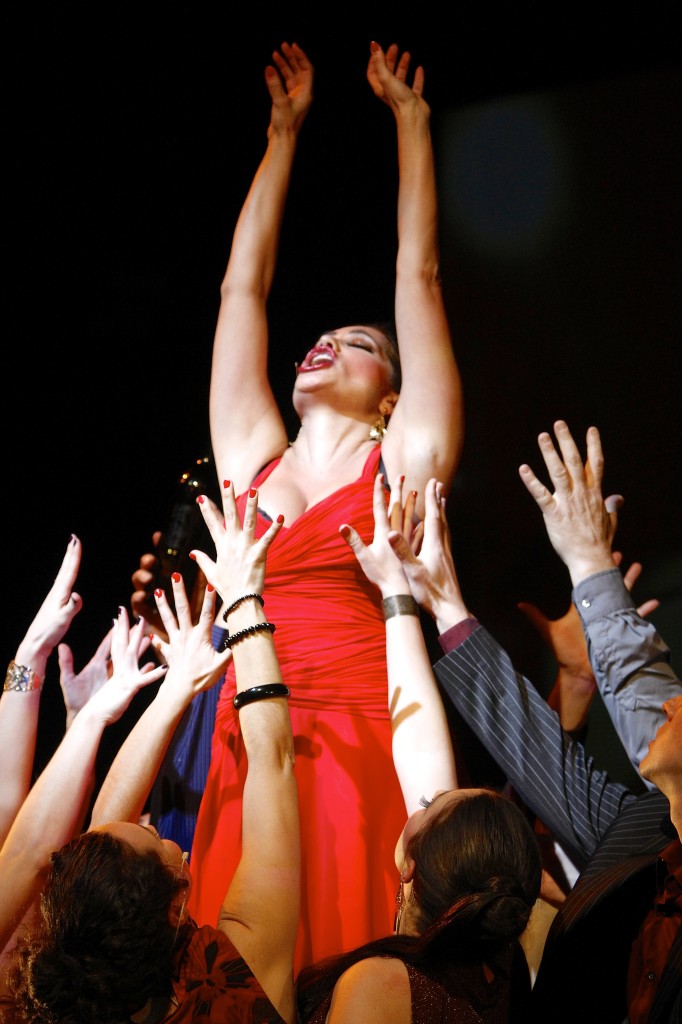 Although there are 13 performers on stage at various times, we mostly hear three voices, one of them speaking instead of singing. Bearded baritone Milton Loayza reads from Horacio Ferrer’s florid libretto about how Maria was born in a poor suburb of the metropolis and made her way to the low life of danger and prostitution. Later, still speaking, Loayza takes on the goblin-like character of El Duende, who controls some of the action. As the text is poetic and allusive, Loayza’s voice emphasizes the fantastic and emotive. Translation into English, with so many short words and abrupt syllables, would inevitably bleach out the color.

Tall, clean-shaven and leading-man handsome is baritone Luis Alejandro Orozco, who becomes a recurrent character named Payador, a singer of the payada, an improvised gaucho folksong. He’s not a lover but rather a cautionary figure. Orozco, a singer with wide experience, brings precision and power to his music. His imposing presence and graceful dance steps complement and enhance the title character without making him only a supporting player. He is the figure Maria must listen to.

What a role Maria is victim and agent. She is first a virgin, then a whore, then virgin, whore and mother. Vibrant, Colombian-born soprano Catalina Cuervo owns Piazzola’s Maria and has sung the role more often than any living person, including for opera companies in Florida, Cincinnati and Milwaukee. Often the music calls for delivery in lower register and may have been written for a mezzo; her rich, velvety timbre is triumphantly compelling and moving.

The demands of Ferrer’s libretto in many ways exceed what Piazzola’s music asks. We do not hear any singing voice for the first 13 minutes of the action. Director-choreographer Anthony Salatino begins with silence as dancers move noiselessly in darkness. Eventually we hear the click of heels and then the narrator’s voice and then, finally, Maria’s wordless evocation of the tango.

Along with being a mythic, possibly religious figure, Maria is also an embodiment of the tango itself. It’s possible to read the libretto as an extended metaphor, and what happens to Maria is what happened to the tango until Piazzola got a hold of it.

Maria, we learn, is a “mystery given to us by a drunken god.” Some of her words and the words spoken of her are meant to be gnomic and ambiguous. She sings, “If the bandonéon provokes me . . . tiara, Tata!/ I bite hard its mouth . . . tiara, Tata!/ With 10 flower spasms that I have in my being.” We hear of biting “blonde mandrakes” and “white ravens.” References are made to the “seal of lunfardo,” a working-class dialect of Buenos Aires, without explanation, and a perhaps a dozen more are even more obscure. No matter.

Other allusions fall into a pattern. Many words from the last book of the New Testament, Revelation or Apocalypse, together with allusions of Greek and other mythologies, point to a discernible narrative arc. This Maria is not the Blessed Virgin of stained-glass windows and holy cards but rather the Mary of Marina Warner’s Alone of Her Sex, an eternal feminine.

Director-choreographer Salatino, the local legend, is really in his element with Maria. Piazzolla could not have asked for a more empathetic hand in expanding all the ways in which the tango rhythms can be expressed. If we ignored the projected titles, the graceful legs and arms would explain much of what we need to know. His placement of conductor Brian Demaris and his eight players at stage left retains the tango’s informal history while delivering symphonic accompaniment. Jody Luce’s costumes, especially for the psychiatrists, and Barry Steele’s evocative lighting meet high standards of professionalism. Steele’s upstage projections underscore the surrealism of the conception.

Syracuse Opera’s Maria de Buenos Aires takes us to places and sensations we have not visited before.