When I was 21 years old, I went to my first Bruce Springsteen concert at Giants Stadium (I’m a late-bloomer for a Jersey girl, I know). I still describe the experience like going to church – except it was a church of more than 50,000 people praying to the god of music, singing every word of every song and screaming “BRUUUUUUCE” at every available moment. It was wild and consuming to be a part of so many people with all of their energy focused on the one common thread between all of us – the music.

Fast forward to November 29, 2014 when the Palace Theater packed up with 600 people, all gathering to hear the music of The Band, recreated. No, 600 people is not 65,000, however, the energy was comparable.

How is that possible?

Stacey Waterman had the vision to create Salt City Waltz three years ago, combining the popular music of a huge historical event in rock culture with local talent. To put it together in a way that showcases so many local musicians taps into all the cylinders more effectively. Suddenly the number of people invested grows exponentially. And the interest is genuine.

The first event was amazing with a reaction far beyond what I was expecting (and I think most of us). The energy was palpable, the turnout incredible and all of that happened even despite the many obstacles faced (like changing the venue the day before the show). The second year grew still, showcasing even more talent, adding to the repertoire and building the impact. But the third year hit a new peak. 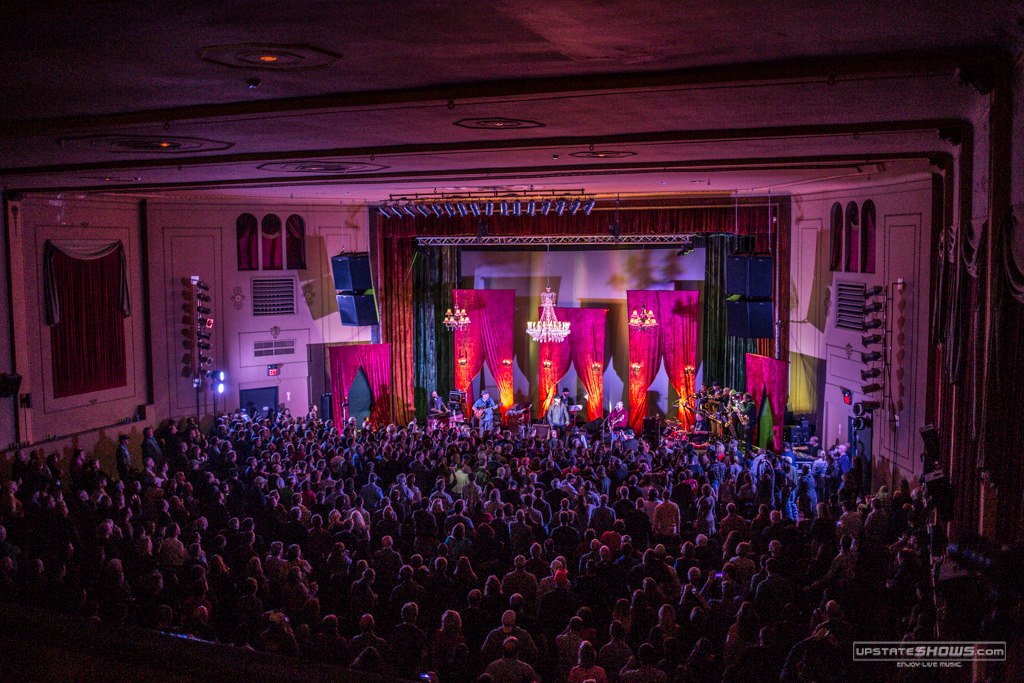 Part of it was the multiple facets – the show was known to be the last (at least until 2017…), it also marked as the 35th anniversary celebration of Dave Frisina’s local music show, Soundcheck, and the list of guest musicians was off the charts (Josh Collins came from Louisville, Jonah Smith from The Voice, local royalty: Karen Savoca and Pete Heitzman, Levon Helm’s horns, etc.). But there was something else that brings us back to the original question: How could the energy of 600 compare to 65,000? How could the show of a superstar like Bruce Springsteen compare to a little homegrown reincarnation featuring some players who perform every week right down the street from the Palace?

How many of those thousands in that Boss audience personally knew the players on stage? Probably a few given the homeland show, but in comparison to the size of the crowd – it was definitely a very small fraction. 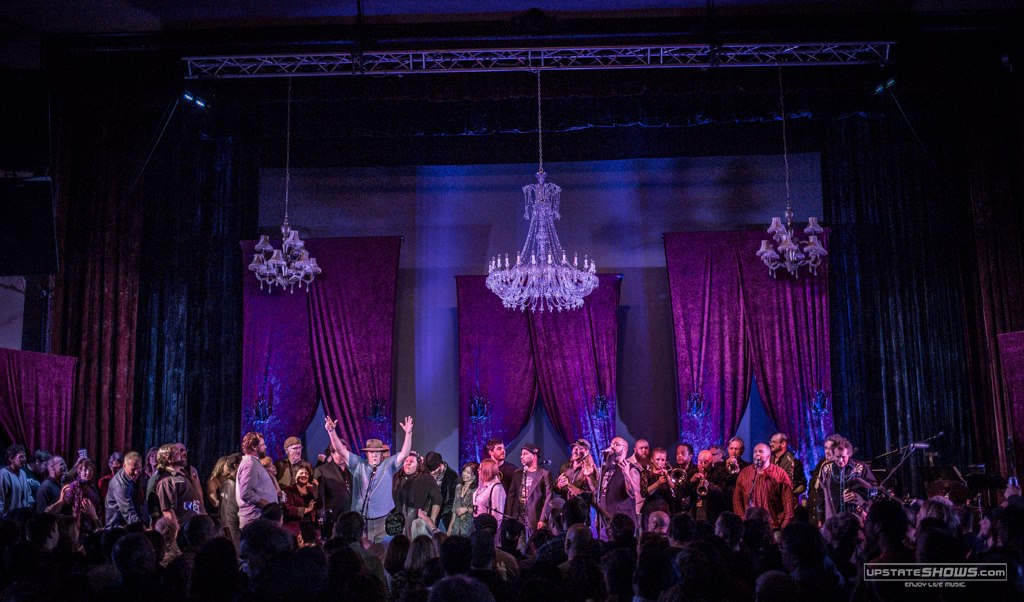 But how many people in the audience at the Waltz knew the people on stage? How many have been following them for years, even decades, and maybe have even come to call them friends? How many people who never had the chance to see The Band, now could see their favorite local musicians bring it to life right in front of them? How many people felt invested because this was their community, their friends up there doing an incredible thing? And furthermore, these local talents were up there right there beside a few of the players (the horn section, which Rocked) who really were there beside Levon Helm not so long ago.

The audience wasn’t there to bow at the feet of a pop culture icon – they were there to be a part of their own history, OUR own history, and to shake hands with the performers at the end of the show. To thank them for their talent – something that often goes unrecognized in a society that tends to squash the arts and praise appearances. And now, how many of these people will take this experience and remember it when they go to see Los Blancos at Empire next Sunday or Miss E. or Kim Monroe or The Ripcords, etc. at their favorite local bar? The ripple effect is huge.

As thoughts for this blog were brewing, a few more things happened. I wrote a story about Ben Mauro – Lionel Richie’s guitar player and a Syracuse native who keeps bringing his successes home because he loves it. He and Paulie Cerra (another successful Syraucse-born musician who is touring the world and living in L.A.) were at Salt City Waltz – and both beamed with pride and amazement at their friends up there, at home, putting on such a great show.

Cerra later posted, “I’m so happy I was in town and able to catch this remarkable show! Folks will remember and talk about it for years to come! The musicians, artists and the Syracuse public now all see what is possible. Thank you (Stacey) for championing the scene!” 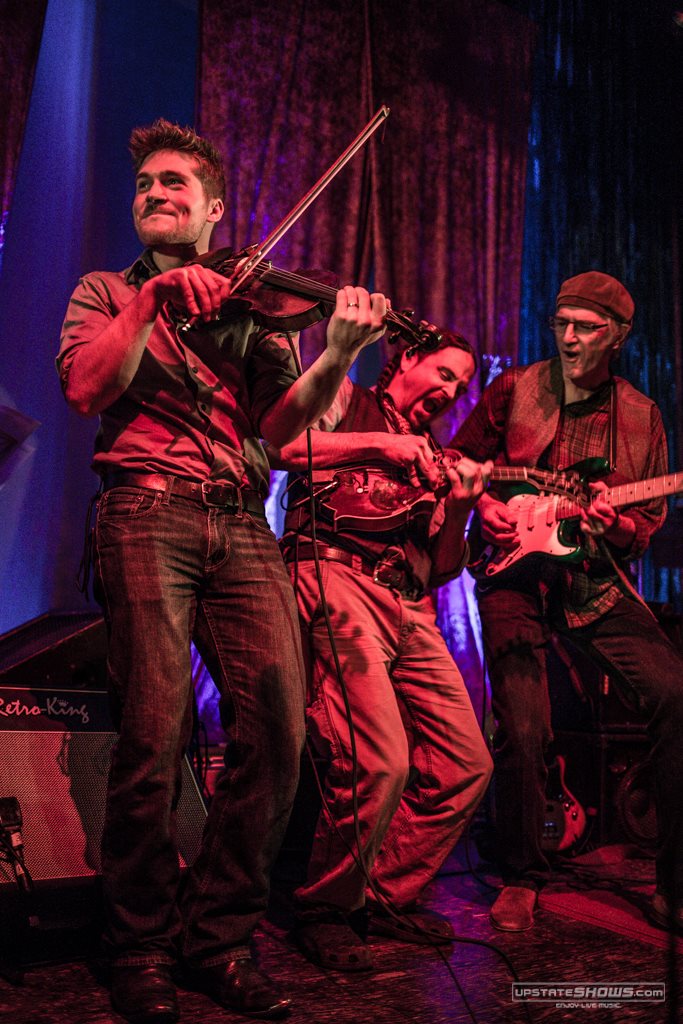 I also spoke with friends who missed the show but caught it on the radio – without realizing it at first. They were driving home from dinner that Saturday when “Helpless” came on The Rebel. He thought, “They don’t usually play this on the radio…” and it wasn’t until he heard the crowd’s roar that he realized he was listening to a show happening around the corner – featuring musicians he’d seen dozens of times before. “It was amazing,” he said.

We tend to take a lot of things for granted. Music is competitive and making a living at it is beyond difficult. It’s hard to keep fighting when bar owners are pushing for the bottom line, for the huge draw every time. It’s hard to tell them that there are good nights and bad and that it’s hard to create, promote, play, practice, book and keep smiling when they give you a pay cut because it was a slow night – even though you sweat just the same on that stage. We, the musicians, need champions, too. We need a hand. We need people to believe in us.

Stacey Waterman, Dave Frisina, and the CROWD that night believed in us and it made all the difference. There are people out there who want REAL music, real talent, real creation, real honesty in performance and all the other things that get swept under the rug when the number one album in America is something the artist didn’t write, play or maybe even sing. There is still a respect for and will always be a need for live music and for shows like this that prove, even little Syracuse, has got world-class talent playing around the corner all the time.

From the stage – it’s a blur. I don’t remember what I played or what really happened in those few minutes of performance. But I do remember people saying, “Great job, Jess,” when I left the stage. I remember people hugging me afterwards, not because of me, but because they were filled with the spirit of the night and of the music. Because THEY were so moved by what the sum of the parts created. Because they were part of a night they’ll never forget.

And neither will I.

Salt City Waltz 2014 was more than amazing. It was such a night…

All thanks and praise to Stacey Waterman and her incredible crew (they are champions), Dave Frisina, ALL of the musicians and the audience that made it all real.

*If you want to check out a few of the artists/bands represented that night, here they are:

All photos by Matt Balch.