Thirty-four years ago (Dec. 8, 1980) musician and peace activist John Lennon was assassinated by Mark David Chapman at the entrance of The Dakota in New York City. Returning from a recording studio at roughly 11 p.m., Lennon was shot in the back four times by Chapman and rushed to Roosevelt Hospital where he was pronounced dead. 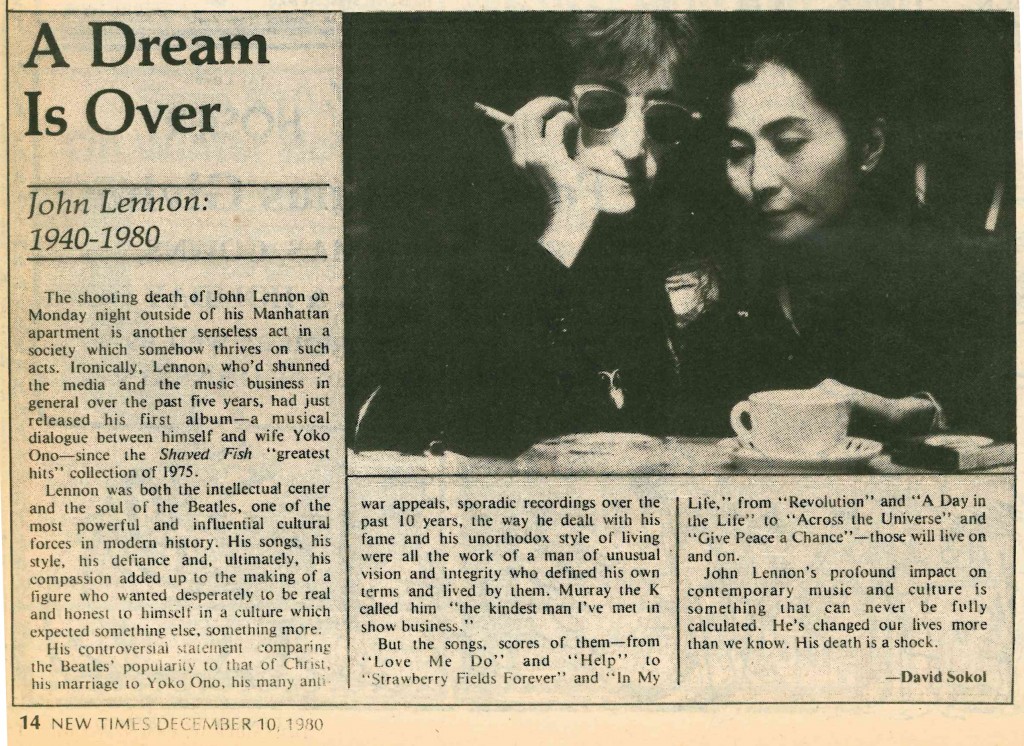 The shooting death of John Lennon on Monday night outside of his Manhattan apartment is another senseless act in a society which somehow thrives on such acts. Ironically, Lennon, who’d shunned the media and the music business in general over the past five years, had just released his first album – a musical dialogue between himself and wife Yoko Ono – since the Shaved Fish “greatest hits” collection of 1975.

Lennon was both the intellectual center and the soul of the Beatles, one of the most powerful and influential cultural forces in modern history. His songs, his style, his defiance and, ultimately, his compassion added up to the making of a figure who wanted desperately to be real and honest to himself in a culture which expected something else, something more.

His controversial statement comparing the Beatles’ popularity to that of Christ, his marriage to Yoko Ono, his many anti-war appeals, sporadic recordings over the past 10 years, the way he dealt with his fame and unorthodox style of living were all the work of a man of unusual vision and integrity who defined his own terms and lived by them. Murray the K called him “the kindest man I’ve met in show business.”

But the songs, scores of them – from “Love Me Do” and “Help” to “Strawberry Fields Forever” and “In My Life,” from “Revolution” and “A Day in the Life” to “Across the Universe” and “Give Peace a Chance” – those will live on and on.

John Lennon’s profound impact on contemporary music and culture is something that can never be fully calculated. He’s changed our lives more than we know. His death is a shock.

A week later, on December 17, 1980, New Times Features Editor Mike Greenstein reflected on the death of John Lennon, in an article titled “Hail the Songs, Mourn the Man,” digitally reproduced below.

Hail the Songs, Mourn the Man

A tremendous sadness has engulfed many of us since John Lennon’s death last week. I felt the attacks overwhelm me several times; so did many of those I spoke with in person and on the phone. So did the nearly 1,000 people who showed up in 20-degree weather for a candlelight memorial service on Syracuse University’s Quad.

It is the kind of sadness people feel only in rare moments when they lose someone or something very dear to them. In other moments like these, we have often found comfort, inspiration and compassion in the music of John Lennon. That’s probably why we feel so emotionally distraught right now.

The murder of one of rock’n’roll’s greatest figures certainly shocked me; the intense emotional reaction of myself and many other usually hardened souls surprised me even more.

I certainly never felt like this when Elvis Presley died. Or Jim Morrison or Janis Joplin or Graham Parsons or any of the others. Their deaths were tragic, but all of them virtually opted out themselves. John Lennon wanted only to live peacefully.

And those others, while important to the history and development of rock as an art form, were still primarily entertainers. Lennon, however, did more than entertain; Lennon touched people and institutions and changed them, inwardly and outwardly.

So I don’t mourn now because of the contributions he made, for those will live. The world of music, both as an art and as a business, changed forever because of the Beatles; the way rock’n’roll is conceived, written, played, sung, recorded, packaged and even marketed emerged from doors they opened, ideas they tried.

And the world changed, too. Countless personal dreams and decisions were made and carried out to the accompaniment of a Beatles soundtrack playing softly in the subconscious. Even if experimentation and technology make current musical composition and marketing techniques obsolete, those songs – all those glorious songs that we can recall almost word for word – will never die. Great songs never do.

But I mourn the man. Because in retrospect, my recurring impression is that it wasn’t just the Beatles – it was him. Lennon was the group’s rocker, its innovator, its poet, its conscience, its sense of humor, its philosopher. And he became ours as well.

“Our songs were about peace and freedom and love,” Lennon once said. “There was never any other message.” But by saying it – again and again – he made an implicit corollary: Be yourself, he told us, and be proud of it. Which is, of course, the message implicit in all of the best rock’n’roll.

To lose so horribly someone who believed in that and could express it so eloquently seems absolutely pointless.

Almost everybody has a favorite Beatle song. The one that has blanketed my thoughts this week is “In My Life.” I know, in my life, I will never forget the contributions of John Lennon. But I don’t think I’ll forget his death either.