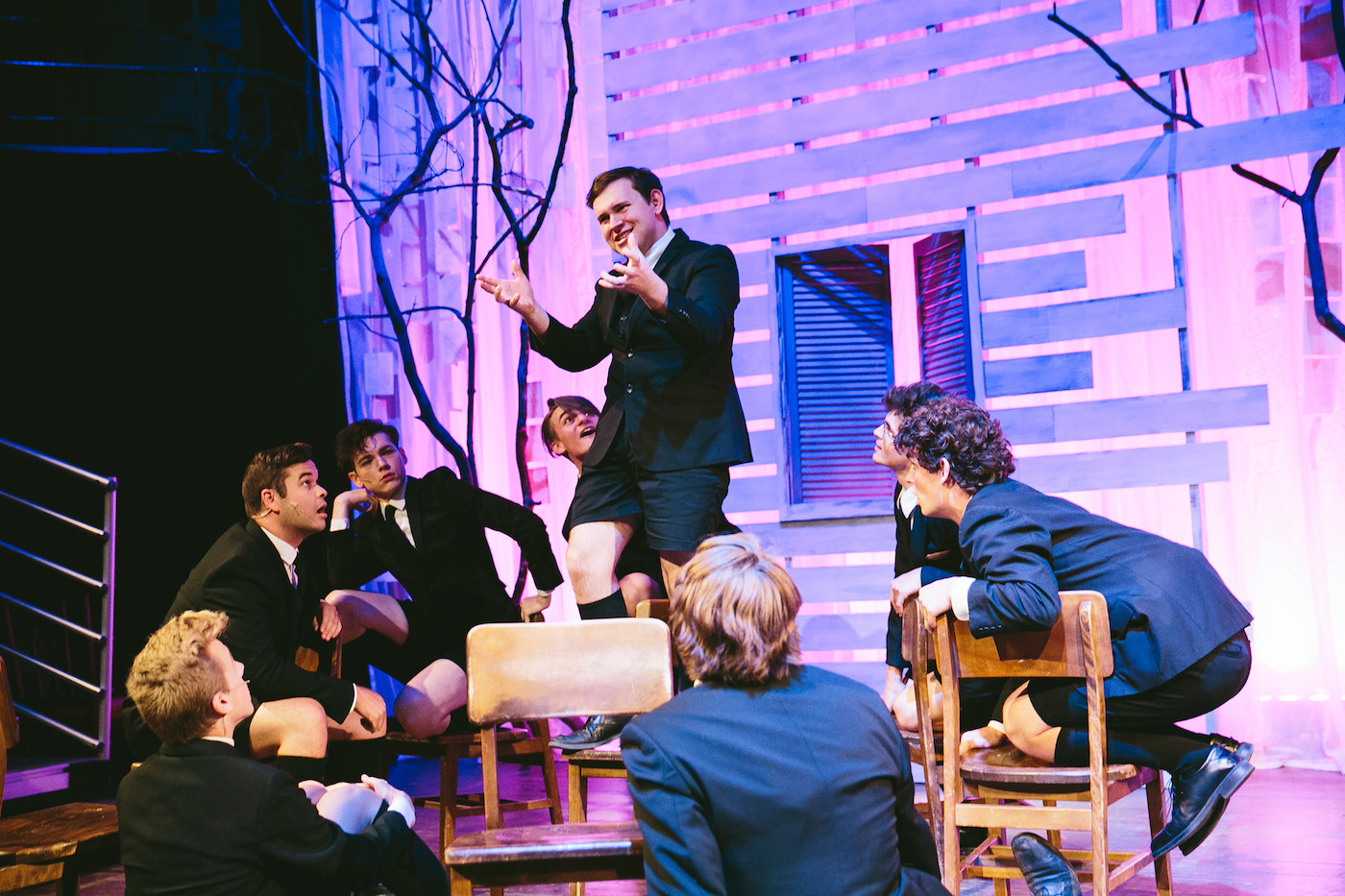 When the award-winning Covey Theatre Company made its scheduled exit two years ago, the young talents driving it, including Garrett Heater and Sara Weiler, found a new summertime home at the Mulroy Civic Center.

Under the flag of Syracuse Summer Theatre, the talents returned to Covey’s favorite venue, the Bevard Room, and thus far have produced two shows. The first was last summer’s Cabaret, a sellout sensation. This year it’s Steven Sater and Duncan Sheik’s Spring Awakening, a rock musical about sexual repression in imperial Germany, that runs through Sunday, Aug. 6.

After opening in 2006 and winning eight Tony Awards, Spring Awakening has something of a cult following, as Rent did before it. It has been produced twice in Central New York, but will still be a discovery for many audiences.

What is more surprising is the number of fresh, photogenic young faces Heater and company have rounded up. There are so many talented newcomers who look as though they might be the age of the characters they are playing. Experienced veterans like music director Bridget Moriarty and choreographer Jodi Bova-Mele still do the heavy lifting. And in the leading roles, Chip Weber and Maya Dwyer proved their mettle in previous Covey leads.

The original German-language Spring Awakening (1891) is by no means forgotten. An Ibsenite problem play, with heavy sets and clanking stage machinery, it was trashed by censors and banned for 15 years. About 1980 the prestige youth company, the John Houseman Players, rediscovered Spring Awakening and performed it widely, no doubt attracting the attention of composer Sheik and lyricist Sater.

Heater’s impressionist set design and directorial discipline moves the action quickly. The odor of century-old guilt and repression are evoked mostly through Sue and Julia Berger’s period costumes, with long dresses for girls and short pants for boys. The play’s words might have originated in Germany, but the sentiment of contemporary America goes back to express them, in a throbbing and obsessive beat.

Action begins when a girl going through puberty asks her mother why her body is behaving so strangely, and, by the way, where do babies come from. Wendla (tall but youthful Maya Dwyer) pleads musically with “Mama Who Bore Me,” in the idiom of a golden age musical. She is soon joined by the female chorus, her classmates, in the rock idiom of the current show.

Her tall, imposing mother (Michaela Oney) is initially sympathetic. She explains, guiltily, that to make babies a woman has to love her husband very much. The versatile Oney plays all the other adult women, some of them contrasting characters. Wendla’s mother, as much a victim of the prevailing mania as her daughter, will take on other tones.

Meanwhile in a nearby schoolroom, the other adult in the cast, Tallon Larham, this time as the master, terrorizes hapless boys in a recitation from Vergil’s Aeneid. Minor flubs bring corporal punishment. Larham takes on more characters than does Oney, sometimes aided by glasses or a collar. We sense trouble when the class klutz, Moritz (Timothy Willard), fecklessly drops a line, prompting the class brain Melchior (Chip Weber, a blond lock falling on his forehead), to speak up on his behalf. His solo, “All That’s Known,” decries narrow injustice.

Opening up to Melchior’s favor, Moritz explains what has made his night sleepless: imaginary flights of sexual fantasy. He fears such dreams are signs of a mental disorder, but Melchior, who has read deeply in forbidden literature, assures him that such nocturnal fantasies are widespread. Other boys join in with their dream narratives and embarrassment to guilt-ridden Moritz, prompting the big production number, “The Bitch of Living,” possibly the best-known musical selection from the show’s CD.

Melchior and Wendla are featured in several numbers, often together, and the expression of the themes of Spring Awakening are embodied in them. Their growing love mixes with dramatic tension when they meet together in a hayloft. It is an intimate, private act, but they are surrounded on stage by the company members, who voice their lyrical support in “I Believe.”

Lovemaking brings a heavy punishment in Spring Awakening. Leads Maya Dwyer and Chip Weber are both heroic and vulnerable, plangent musical performers who take their characters to tragic conclusions.