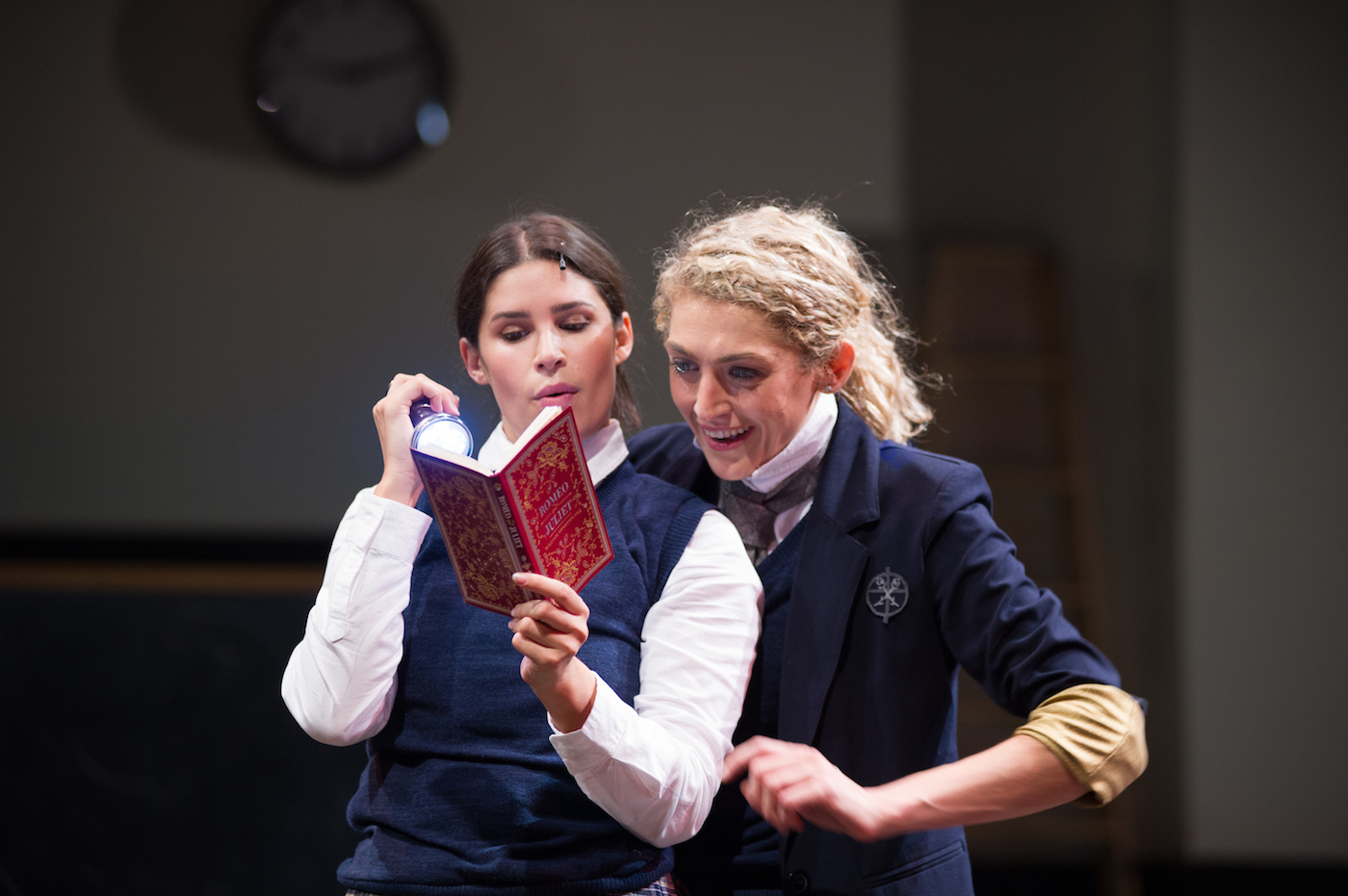 Farces and romances abound at Hangar and Cortland Rep.

The reputation that summer theater will not take chances was never justified, never more so than this season. We could hardly see greater contrasts than in the offerings of Cortland Repertory Theatre and Ithaca’s Hangar Theatre running in the same time slot.

Closer to Syracuse, Cortland Repertory is presenting through Saturday, Aug. 26, a play no one has heard of by an unknown playwright: Katherine DiSavino’s Nana’s Naughty Knickers. Sure, it sounds like a raucous comedy, but it’s still a leap into the unknown.

Forty-five minutes south, the Hangar is producing through Sept. 2 Joe Calarco’s Shakespeare’s R&J, a restaging and reinterpretation of the Bard’s deathless romance by a small, same-sex cast, this time female. R&J originated at the Hangar more than 20 years ago, enjoyed acclaim at the Edinburgh Festival, went on to long runs in London and New York City, and is now returning home.

DiSavino’s title sounds like one of those innocent sex farces Avery Hopwood wrote 80 years ago, like Getting Gertie’s Garter, and feels like it, too. Sound designer Seth Asa Sengel quotes some vintage Cole Porter numbers to get us in the mood. DiSavino premiered it at her family’s enterprise, the Rainbow Dinner Theatre in rural Lancaster County, Pa., in 2010, and has since become one of agent Samuel French’s hottest rentals. 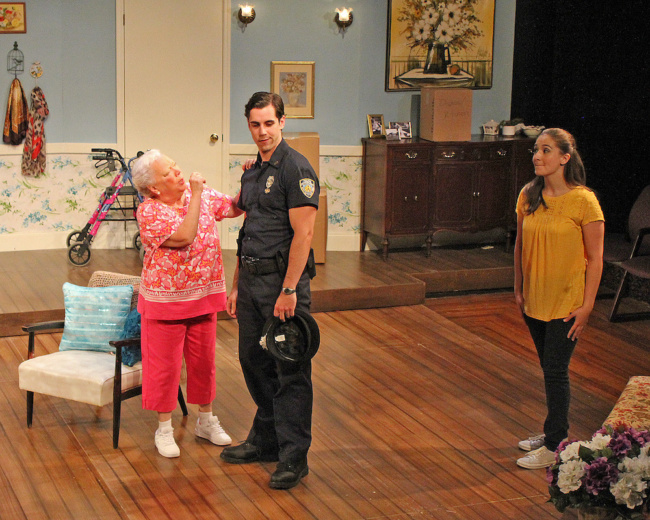 Nana’s rent-controlled apartment on the Upper East Side is populated by what look like small-town WASPs, and only two characters speak with New York accents. It’s an urban farce (four doors) designed to play west of the Hudson.

The Nana of the title is Sylvia Charles, supposed to be 83 according to the script. White-haired and pint-sized, Peggy Lewis, an experienced Equity player, portrays Nana as constantly on the run, as if she had something to hide. She does.

As we learn through the eyes of her anguished granddaughter Bridget (Jennifer Brunker), Nana has been running a retail lingerie salon for senior women out of her apartment. She’s not only violating her lease, but she has no license and is not collecting sales tax. Handsome Officer Tim O’Grady (Tom DeMichele) hangs around the apartment making sheep’s eyes at Bridget but never notices anything amiss.

Everyone in the cast, including conveniently deaf gal pal Vera (Ms. Sebastian Ryder), always apoplectic landlord Gil Schmidt (Charles Baran) and sexy model Heather (Caiti Marlowe), all get abundant laughs, but for screaming hysteria in the packed house, no one can beat the actual lingerie and Shelley Barish’s set design. To keep her operation discreet, Nana stores the illegal duds in a series of jack-in-the-box units, guaranteed to pop open at the wrong time.

Down at Ithaca’s Hangar for its summer finale, Daniel Zimmerman’s drab scenic design for Shakespeare’s R&J looks like a cross between a vintage parochial school and a prison. In previous local productions the four unnamed, regimented students have been male. Director Melissa Kievman (well-remembered for her October 2005 production of Tracy Letts’ controversial Bug) has decided to make them female. As the girls are wearing blazers and tartan skirts, this could be an affluent school, perhaps run by the Madams of the Sacred Heart.

After a hard day of conjugating Latin verbs and reciting mathematical formulae, the students pull up the floorboards of their dorm room to find a forbidden copy of Romeo and Juliet. They begin to read the lines to one another, seemingly titillated by the implicit sensuality of the language. They continue, restaging most of the action as a kind of rebellion against authority and an assertion of self. As they perform before the portrait of an ominous ecclesiastic and an imposing clock, the whole thing feels like a subterfuge that could be interrupted.

The students are by no means deconstructing Shakespeare. Instead, by never changing costumes and performing all action on a bare stage, with makeshift props (a ruler for a sword), the production makes the poetry of the speeches prime. All four players bring experience with Shakespeare, and Nicole King even appeared at the Globe in London.

There’s plenty of action. One speech is delivered while the player is sliding down a bannister. Those skirts come with opaque pantaloons so there’s no distracting immodesty when a character is tumbling on the floor.

As the four are contrasting physical types, we never have any trouble keeping them straight, as well as the characters they play, even the men. Nicole Villamil, she of the bannister, takes on Romeo with a confident voice, never making it a trousers role, aping male manners. Eunice Akinola, although the tallest member of the cast, delivers a vulnerable Juliet. Amanda Kristin Nichols brings much swagger to Mercutio, especially the death scene. And Nicole King deftly shifts from the arrogant Tybalt to the uber-maternal nurse.

Calarco’s experiment with Shakespeare’s R&J is to test whether the poetry can hold us. Kievman and company assures that it does.

Orwell Comes Alive
Sounds of the Season
To Top