Unbreakable Kimmy Schmidt is a refreshing burst of energy and positivity

Kimmy Schmidt is optimistic. Despite having been kept in an underground bunker in Indiana for fifteen years by an abusive cult leader, Kimmy approaches life with nothing but positivity. While all the best shows on TV right now are all about corrupt politicians, corrupt lawyers and racism in the justice system, and when the early spring in Syracuse still looks a lot like winter, Unbreakable Kimmy Schmidt is a refreshing burst of energy and positivity.

The first episode begins when Kimmy (Ellie Kemper) and her three abducted comrades are liberated from a hole in the ground where they have been kept for over a decade. They were brainwashed to believe that the apocalypse has come because of their stupidity, and they, along with their long-haired leader, Reverend Richard Wayne Gary Wayne (Jon Hamm) were spared.

Upon their liberation, they become media darlings. Speculation abounds as to how they will adjust to life in the 21st century, with all of its cell phones and automatic faucets. The storyline is clearly borrowed from the 2013 liberation of Gina DeJesus, Amanda Barry and Michelle Knight in Cleveland, Ohio, complete with a viral remix of a local black man’s interview about the discovery, which serves as the show’s theme song.

The four women — known as the “Indiana Mole Women” — are guests on the Today show, under the headline “Breaking News: White women found!” It’s a clever nod by writer-creators Tina Fey and Robert Carlock to media critics who say that victimized white women receive more attention in these situations than victimized people of color. The show is full of jokes about race, gender and sexuality. Some have criticized its handling of race, but the series is undoubtedly an equal opportunity offender, taking shots at white people, black people, Latino people, Native American people, midwestern people, old people, young people, gay people, straight people, women, men, hoarders, actors, rich people, religious people, and the undereducated. Fans of 30 Rock and Tina Fey and Amy Poehler’s Golden Globes monologues will instantly recognize this sharp humor and Fey’s remarkable ability to take heavy subject matter, turn it on its head, challenge it, and then lighten it to a featherweight and blow it away in the breeze. 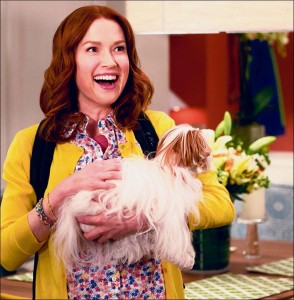 After the Today interview, Kimmy decides to try to “make it” in New York City. She only has a middle school education, but that doesn’t matter. She is, after all, unbreakable. Though it later becomes clear that her ordeal continues to haunt her, she exudes that sort of curiosity and innocence that we all lose as soon as somebody calls us fat or picks us last in gym class in the eighth grade. Despite her harrowing circumstances, Kimmy has at least been kept away from the trials of teenagerhood, perfectly preserved as a plucky fourteen-year-old idealist. She smiles big, cares for others unconditionally and loves brightly colored clothes. Sure, she’s not exactly someone I’d want to hang out with all the time, but in small doses, she is a welcome shot of unabashed enthusiasm.

As a first step toward a new life, Kimmy finds a roommate. Titus Andromedon (the spectacular Tituss Burgess is a flamboyant struggling actor who lives in the basement apartment of a doting older woman, Lillian (Carol Kane). Kimmy and Titus immediately hit it off, and his mawkish theatricality perfectly balances her exhausting buoyancy. Together, they decide to take their problems by the horns and make the best life they can. Such friendship! Such hope!

The best part about Unbreakable Kimmy Schmidt (well, aside from the positivity) is the breakneck pace. The jokes flap by like Kimmy’s accordion bedroom door — whap! whap! whap! whap! They’re not all laugh-out-loud funny. In fact, many fell frustratingly flat for me, like Kimmy’s first conversation with Siri or her first subway ride (“Wee!”). Her Blast From the Past meets 13 Going On 30 fish-out-of-water quirkiness gets old fast, much like the timely but fleeting social media jokes withered quickly on this fall’s cancelled-too-soon Selfie.

But, as Kimmy says, “You can handle anything for ten seconds.” If you’re not feeling Kimmy’s cheer (which is at times, admittedly, oppressive), or not connecting with the barrage of jokes being thrown at the wall, just count to ten. Before you’re done, something will stick, and Kimmy’s infectious smile will pull you back in. Unbreakable Kimmy Schmidt is an addicting dose of refreshment, like a spa day or a nice springtime jog through the park with flowers blooming and birds chirping. Tucked amid the merriment are lovely messages about self love (Kimmy, while accompanying a friend to the plastic surgeon: “Changing your outside isn’t going to fix what’s going on inside.”) and resilience (Titus: “I’m pretty but tough like a diamond, or beef jerky in a ballgown.”). It’s not preachy or didactic — just pure fun. If you can hang on through the first two or three episodes, you’ll suddenly find that you’ve watched six, and you couldn’t get off the ride if you wanted to.

The thirteen-episode first season of Unbreakable Kimmy Schmidt is streaming now on Netflix.