A show about the people who suffer when crimes are committed

The new anthology drama American Crime, from John Ridley (12 Years A Slave), debuted Thursday on ABC with the lofty intent to fictionalize — and perhaps humanize — the news. It plunges us into the lives of people whose still, drawn faces dominate our TV screens in times of personal tragedy, but whose daily lives we never see, and whose perspective we rarely share.

American Crime operates in the same vein as Broadchurch (and its U.S. copy, Gracepoint) and The Killing peering into the lives of murder victims and their families and fleshing out a criminal mystery with the human stories of those left behind. But it diverges from its contemporaries in one specific way: in American Crime, the human stories that are usually peripheral are primary. Police and detectives are mostly faceless. This is not show about solving crime, per se, but about the people who suffer when crimes are committed, and when prejudice upstages justice.

In the pilot, four storylines are established and quickly converge. A white war veteran, Matt Skokie, has been murdered. His divorced parents, Russ (Timothy Hutton) and Barb (Felicity Huffman) travel to Modesto, CA, to claim his body and help inform the investigation, coming together as a family after a long estrangement. Tony Gutierrez (Johnny Ortiz), the young son of a mechanic (Benito Martinez), is caught driving an unregistered car through town — a car spotted near the site of Matt’s murder. The teenaged Tony is not a murderer; he has been renting the car out to an intimidating gang member Hector Tonz (Richard Cabral). But Hector has no real power, either — he is a thief, operating at the bottom of the gang, trading stolen scraps for money and marijuana. An interracial couple, both meth heads, Aubry (Caitlin Gerard) and Carter (Elivis Nolasco) are also desperate to satisfy their addiction, and the drug world is small. In a bad deal, they anger Hector’s gang. When Hector is taken down by a police gunshot to the leg, and taken into custody for Matt’s murder, he in turn implicates Carter, who is also arrested.

In creator John Ridley’s Academy Award winning 12 Years A Slave, the camera observes its subjects intimately, letting them move on screen physically and emotionally, through all of their meditations and violences. Who can forget the static, unrelenting, three-minute shot of a man struggling on a lynch in front of his home while his friends walk by, but do not intervene? Or the long, wrenching shot of protagonist Solomon Northrop (Chiwetel Ejiofor) staring straight at the camera? Ridley is not afraid to punch viewers in the gut with violence and tragedy, or to linger on a single shot, allowing great actors to do their thing. Without a doubt, American Crime is packed with great actors who can do great things. And as an anthology, after 11 episodes, we may get an entirely new (great) cast with an entirely new story.

By rarely moving the camera, Ridley slows the pace of the typical crime procedural. We don’t jump around, switching perspectives. Instead, characters move freely in and out of the frame. Nor are there many action scenes at all. When the tone does turn tense or violent, we are often tucked away in a corner, or peering around a door frame, with a true observer’s view on the situation. With such careful filmmaking, Ridley rides the line between detached observer (a familiar position to those of us who don’t live in communities racked with crime, gang violence or racial tension), and embroiled participant. Ridley allows us to share a private moment of grief with the father of a murdered soldier, then watch from safely inside a store as police shoot down a suspect they have already surrounded, before taking him into custody. We see the way the world goes on around grieving parents, while their world has all but stopped. 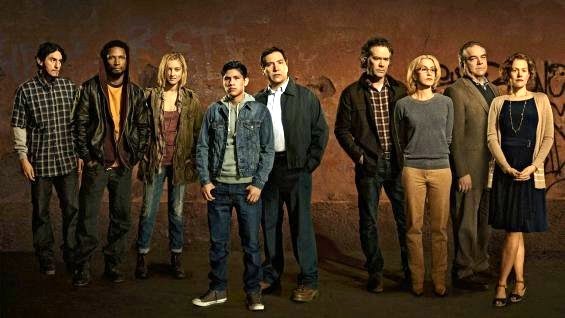 Ridley’s style and the show’s ponderous pace may prove too heavy for some. The news as we see it each morning — as upsetting as it may often be — allows us a comfortable distance from the realities of poverty and racial bias. The difficulty and the strength of American Crime is in the way it uses human stories to expose the most difficult sides of human nature, bringing into sharp and unrelenting focus our individual and collective flaws, and the ways we handle loss, fear and forgiveness. It’s no escapist romp, but if you’re looking for a TV show with some meat on its bones, this may be your best spring treat. 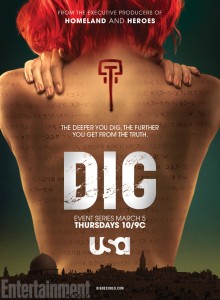 If you’re looking for an equally ripped-from-the-headlines, more escapist drama, flip over to USA at the same time as American Crime. Dig, from Tim Kring (Heroes, Touch) and Gideon Raff (Homeland) explores the implications of religious fundamentalism and end of days conspiracy theories. Don’t worry, it’s not nearly as heavy as it sounds.

FBI agent Peter Connolly (Jason Isaacs) is stationed in Jerusalem. After spending a night with a mysterious American archaeology student, only to find out the next morning that she has been murdered, Connolly is drawn into a cryptic end of days prophecy fulfillment plot involving a flawless red cow, a rabbi, and a fundamentalist Christian preacher, and a young boy whose feet have never touched the earth.

Dig feels a little like Indiana Jones meets The Da Vinci Code — great mindless popcorn fare. Religious rituals abound, but they are glossed over — exoticized, not explained. Surely there is something to be gained from researching the sects involved and their beliefs, and USA Network has a launched a whole second screen campaign where you can solve mysteries and “become part of the story.” If you simply want to escape into a frothy, exotic action adventure series, you can still enjoy Dig without all the fuss, though, like Connolly, you might feel a little like a stranger in a strange land.