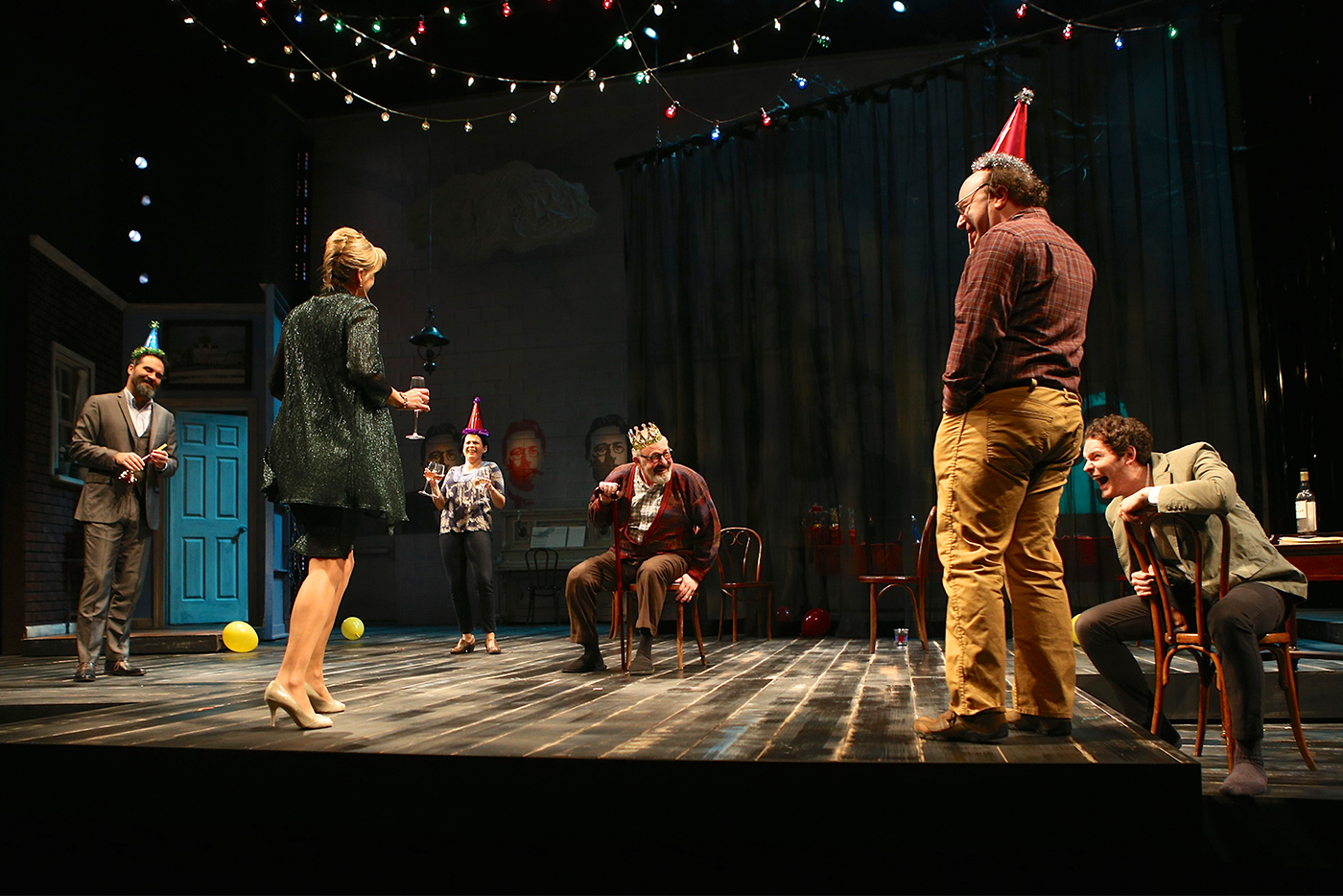 The zany production of “Stupid F***ing Bird” makes its way to Syracuse Stage.

Knowing a good thing when they see it, Syracuse Stage has brought in the Woolly Mammoth Theatre Company’s production of Stupid F***ing Bird, playwright Aaron Posner’s 2013 modern-day comedic adaptation of Anton Chekhov’s The Seagull. Bird was the word at Woolly Mammoth’s Beltway stomping grounds, when the 2013 debut proved so successful that it was quickly reprised in 2014.

In deference to sensitive readers, however, as well as adhering to Syracuse Stage’s own advertising campaign, we’ll refrain from utilizing the title’s key Anglo-Saxonism, which is employed almost as often as in a Tarantino movie. Strangely, however, some ladies were giddily hurling f-bombs to each other during a recent intermission, apparently feeling liberated by the show’s title.

Perhaps sensing that the phrase “Russian theater” would be a cue for Syracuse Stage subscribers to head for the hills (Woody Allen kidded that school of existential ennui in his 1975 movie Love and Death), Posner’s Chekhovian remix opts for a hip irreverence that nevertheless manages to delve into some dark places. Would-be theater artist Conrad (Ian Holcomb) returns home to showcase a performance piece titled Here We Are, as performed by his girlfriend, acting ingenue Nina (Katie deBuys), at the estate of Conrad’s mother, well-known actress Emma Arkadina (Kate Eastwood Norris).

When Emma interrupts the performance to mock Conrad’s work as pretentious, the critique sends him down a rabbit hole of despair. It doesn’t help, for that matter, when Nina is intrigued with Doyle’s celebrityhood. Meanwhile, the lovelorn Dev (who dismisses himself in the opening scene as being a chubby, balding, flatfooted orphan) has an unrequited yearning for Mash, who is still crushing for handsome Conrad. And Doctor Eugene would like nothing better than to relive his late 20s, because this time he would do it smarter.

Even with Chekhov as the show’s guiding force, you never quite know where Posner and director Howard Shalwitz are heading. It starts when cast members break through the fourth wall from the get-go to chat with the audience. At one point all seven performers engage in a Russian chair dance, then line up on stage like members of a therapy session. Some players even burst into song, including Mash strumming a ukelele to warble the dirge, “Life Is Disappointing.”

Meanwhile, multicolored portrait images of Chekhov hang on the back wall of scenic designer Misha Kathman’s spartan set, looming over the characters during the beginning and closing acts. Yet a typical kitchen set is utilized during the crucial second act when several pivotal moments take place, offering a more intimate take on these relationships.

Syracuse Stage had good box-office fortune with Christopher Durang’s consistently amusing Chekhov spoof, Vanya and Sonia and Masha and Spike, performed in September 2014. Vanya was more accessible, however, while Bird features occasional bursts of drama and tragedy (especially in a narrative postscript involving all seven roles), which may explain why the company placed it in the January “risk slot.”

Yet Woolly Mammoth has transported a polished, invigorating theatrical work to the Salt City, a show that hums on all cylinders with stellar performances from its cast. Kate Eastwood Norris does wonders with Emma, a flamboyant middle-aged actress who was never ready for motherhood at a youthful age (as Conrad regretfully learned), instead surrendering her life to a series of wrongheaded artistic impulses and romantic liaisons. As her lover Doyle, Cody Nickell brings sly nuance to his caddish celebrity, while bringing down the house with his character’s closing line.

Katie deBuys negotiates Nina’s daunting character arc, from novice actress to spurned lover, without missing a beat, while one can empathize with the tortured artist effect of Ian Holcomb’s Conrad. Rick Foucheux avoids the wizened clichés of his aging doctor. And there’s some charming interplay between Darius Pierce’s Dev and Kimberly Gilbert’s Mash when they duet on a musical number about life going on and on and on.

Breaking that fourth wall can sometimes be an audience trap, however. When a beer-swigging Conrad asked one audience about how he could win back Nina’s affections, one wag instead advised, “Switch to Corona.”