Gifford Family Theatre’s production of The Cat in the Hat (running through June 14 at Le Moyne College’s Coyne Center) is emphatically not the Lynn Ahrens-Stephen Flaherty musical Seussical, or even a stripped-down kids’ version of it. This little confection was whipped up by actress-playwright Katie Mitchell recently for London’s National Theatre, a place where they think even 6-year-olds can get a joke without having it explained to them.

As with the original Dr. Seuss books, the emphasis here is not on some great narrative arc but rather the delight in telling the story, wherever it should lead. Some prerecorded music appears to enhance the driving wit: One section includes the Boots Randolph madcap saxophone romp from The Benny Hill Show. But that does not mean Cat in the Hat is all slapstick.

The action begins quietly with two children, Boy (Ryan Bannen) and Sally (Carrie Bates), complaining about being stuck in the house with nothing to do on a rainy, cold day. Their only companion is the Fish, played by Natasia White, who holds a hand puppet in a bowl but also speaks the creature’s lines. Never limited by the confines of the bowl, the Fish speaks for adventures to be had at sea, like encounters with whales.

At this point actress White begins to circle the stage, roaming out into the audience, as the Fish puppet lets out a cascade of bubbles. This is followed by a loud bump and the entrance of the frisky Cat (Christopher Lupia), ready for mischief. Sure enough, he’s wearing a tall, tilting topper with red and white stripes that look just like the illustrations.

Jason Grasso’s scenic design puts everything we see on small, silent casters, which means that all the surroundings could just fly away at a whim, which they do. The aim of this Gifford Family production might be to introduce youngsters to the art of human invention on the live stage, but technologically it moves as fast and seamlessly as what the kids are used to from television or even video games. 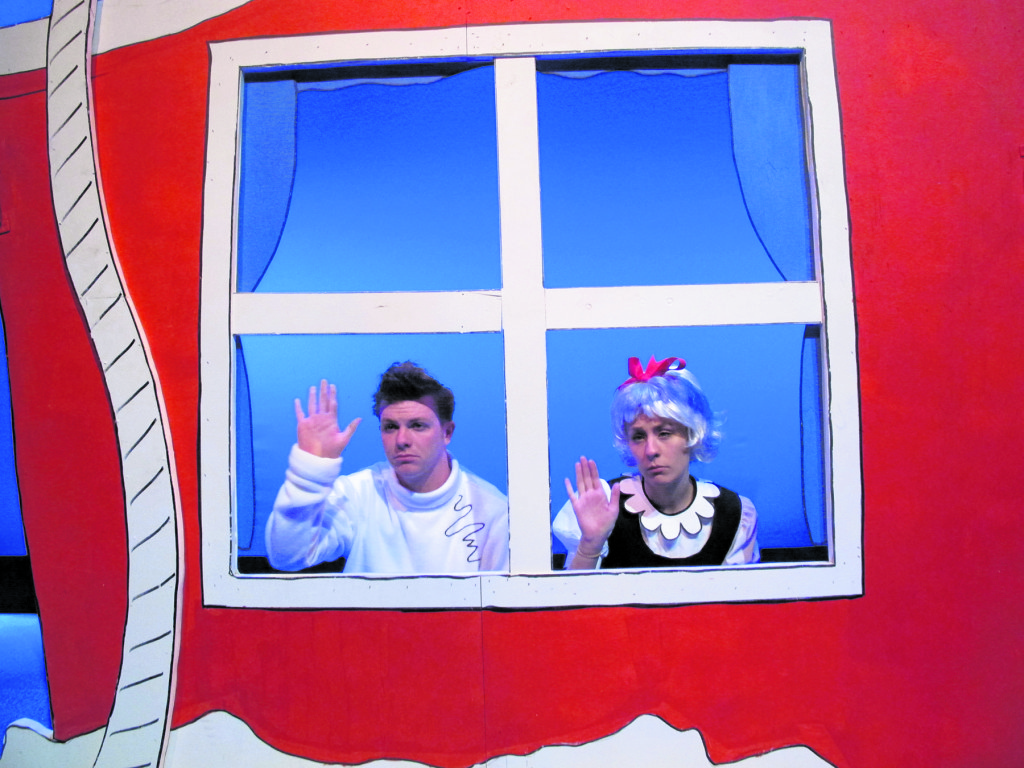 Ryan Bannen and Carrie Bates in The Cat in the Hat. Photo by Karel Blakeley.

What follows is a kind of surreal vaudeville show with the Cat as the ringmaster. First he shows the children how to play tennis. We never see the speeding ball, but we hear a convincing “Thwack” as it connects with the racket. Abruptly he switches to a 16-inch bicycle, which roars with motorcycle sound effects as he crosses the stage. Lupia is not incidentally the tallest, most massive member of the cast, with loose hips adept at twerking or the hula. When he mounts the tiny bicycle he really evokes a bear at the circus.

Picking up on the circus motif, the Cat is fond of a soft, large ball with no bounce. Throw it and it just goes “Plop!” Yet it is good for standing. With both feet on the ball, the Cat holds up his umbrella, the same one whose handle he has just played as a flute. All the while he balances a cup on the top of his hat. There is already growing tension, however, from the worry-wart Fish, who whines that Mother will be upset to see what a mess the house has become.

Without much motivation the Cat drags in the big, red wooden box designed for the game of “fun in a box.” The handling of this otherwise obvious device displays Matt Chiorini’s contributions as the show’s director. Adults in the audience immediately grasp that the box is actually cardboard and feather-light, but pretense makes it appear heavier. When the Cat catches his tail (a train of raggedy cloth) under the box, he squeals in pain and then cossets and soothes it.

Once the box is ensconced adjacent to the wings, it becomes a surreptitious doorway. Through it fly the two creatures called Things (Lucas Greer and Peter Medici), dressed in what look like red pajamas and blue fright wigs. The Things are a tumbling act, with first-class acrobatic feats, but they also tear around the stage spreading havoc.

The Coyne Center’s opening night-performance of The Cat in the Hat was packed with first and third graders, who watched with open-mouthed glee and awe. Not all good lessons have to be made of broccoli and spinach.