Andrew Lippa’s The Wild Party (through May 31)

The news from Central New York Playhouse last week was that the troupe had succeeded in seating its 10,000th playgoer in the former retail space on the second floor of Shoppingtown Mall. More significant is that its current production, Andrew Lippa’s The Wild Party (running through May 31), is pivotal to the development of the company. No other show has succeeded better in minimizing the space’s weaknesses while exploiting its assets. Wild Party is also one of the edgiest shows any community theater company has ever attempted, in a range with Judy’s Scary Little Christmas and Urinetown.

Credit director-choreographer Stephfond Brunson and music director Abel Searor, who put the eight-player musical ensemble on a raised platform upstage so that all the action is in front of the musicians. This is the same way Syracuse Opera staged Gershwin’s Porgy and Bess, with some of the same effect: The music matters more. Lippa’s complex, terrific score is one of The Wild Party’s major attractions, and this staging clarifies orchestral tone without drowning out voices. Giving up space on the relatively small stage also works well. It makes the show feel like a kind of subversive, subterranean cabaret. This is another way of saying it makes you forget you’re in a mall.

All of this in the name of debauchery. New Yorker writer Joseph Moncure March’s long narrative poem “The Wild Party” (1928) was a literary sensation in its day. Jack Kroll called it “F. Scott Fitzgerald on Spanish fly.” Banned in Boston and elsewhere, it was the book that made William S. Burroughs (Naked Lunch) want to become a writer. Never forgotten, it was the basis of the dark James Coco film The Wild Party (1975) and two musicals in the year 2000. Michael John LaChiusa’s Broadway show boasted big names but suffered a short run, while Andrew Lippa’s off-Broadway version became the one everyone has wanted to remember.

Flushed with tension, Wild Party’s action begins when Queenie (Leila Dean), a blonde chorine from vaudeville, is squabbling with her abusive husband Burrs (Jason Bean), a mordant clown possibly based on silent film actor Fatty Arbuckle. To raise their spirits she decides to throw the mother of all parties and make herself attractive to the men who arrive as a way of making Burr jealous. They’re a motley lot, and most are in some form of show business, so they tend to wear black and flaunt shtick in their entrances. No one makes a bigger splash than Queenie’s friend Kate (Mary Musial) with her show-stopping “Look at Me Now.”

To meet the demands of the music Brunson and Searor have cast the net to snare just the right voices. Leila Dean might once have been a Mary Magdalene in a Salt City Center production of Jesus Christ Superstar but she’s been belting them out at rock venues more recently. Tall, almost ghostly in her blonde marcel wig, with epaulet-like tattoos on her alabaster skin, Dean can dominate a scene even before she sings. 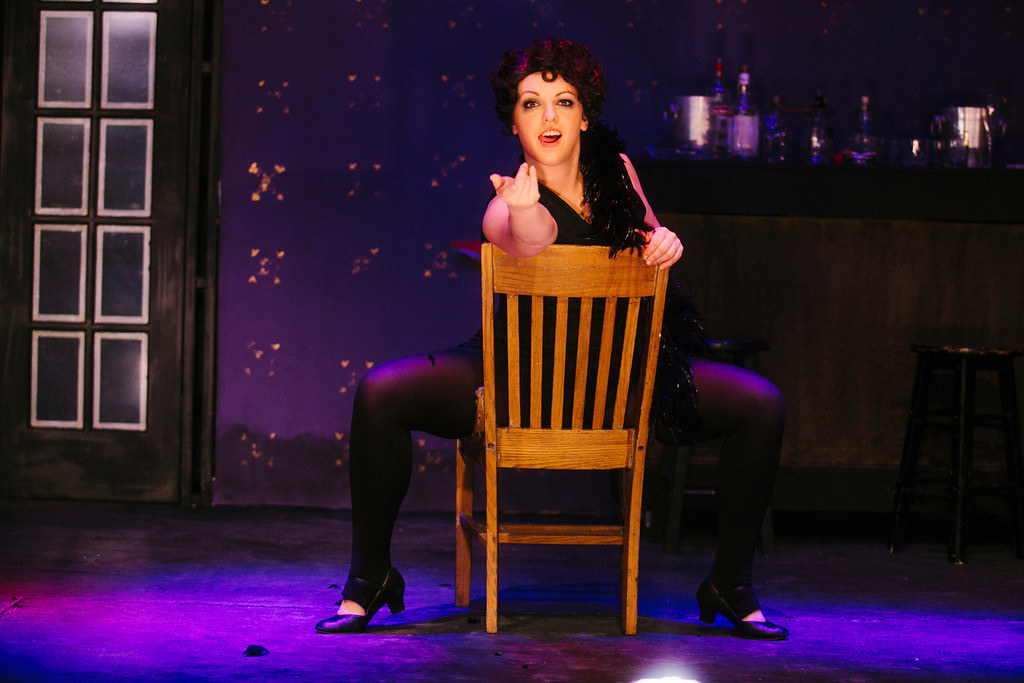 The WIld Party at CNY Playhouse. Photo by Amelia Beamish.

Last seen in Covey Theater Company’s Rent, Mary Musial’s Kate writhes with the bumptious energy of a young Liza Minnelli. Jason Bean as the fateful Burrs (not always seen in clown makeup) was a community theater discovery when he impressed deeply as Javert in Baldwinsville Theatre Guild’s Les Misérables in March.

Company regulars Liam Fitzpatrick has made some sacrifices to play Mr. Black, a threatening dude who arrives with Kate. Fitzpatrick has shaved nearly all the hair from his ears to the top of his crown, with what’s left on top pomaded straight back, to look like something from Weimar Germany. Black’s entrance number, “Poor Child,” a quartet with Burrs, Kate and Queenie, suggests a naïve romantic under the swagger. The chemistry with Queenie is immediate, and flames are running along the taboo love triangle.

Mr. Black’s hair is hardly the only reminder of Weimar Germany, also the era of Bertolt Brecht and Kurt Weill. One of the singing D’Armano brothers, Phil (Benjamin Wells), is dressed to look like the Emcee in the Brecht-inspired Cabaret. Donnie Williams’ period costumes, the extreme white makeup with blackened eyes, and Marguerite Beebe’s harsh, from-below lighting design could put the party in Berlin instead of Manhattan.