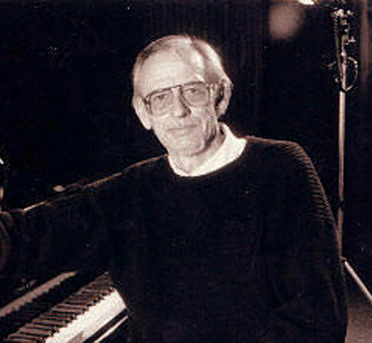 Phil Klein was singing to me in French on the phone at 8:30 Wednesday morning.

“Bonjour, bonjour,” the Syracuse octogenarian crooned in that way that he’s entertained many with classic lines as he’s played his piano or electric keyboard over the decades around the Salt City.

Not bad. Yeah, we’ve been friendly for decades now, but this was no serenade. Klein was calling to talk music in the movies. Namely, his music placed in an extremely popular movie.

“Bonjour, Bonjour” plays in the background as stars Shailene Woodley and Ansel Elgort navigate Amsterdam in The Fault in Our Stars. Syracuse native Maria DeAngelis sings. Klein wrote the music. She wrote the lyrics, along with husband Pierre Frison. DeAngelis and Klein have been co-writing for years and years.

The enthusiastic Klein reports that 50 seconds of their song are used in the background of the scene. That’s great by any Hollywood standard. Not long ago, a 21-second snippet of another of their songs was used on the popular TV show “NCIS.”

Klein says he and DeAngelis contracted with a company called Heavy Hitters Music to shop renditions of their songs recorded in French for  use like this.

It’s working, for the retired music educator at Syracuse University and Onondaga Community College and jazz singer who lived in France for several years but now resides in New York City.

I asked, but he didn’t want to talk money. But Klein was enthusiastic about how many fannies can end up in the seats to see The Fault in Our Stars worldwide, and then buy pay-per-view or rent from the red boxes or buy DVDs.

It’s been a dozen year’s since Warner Brothers decided that the time-tested cartoon mastery of Scooby-Doo needed to be turned into a live action movie for a new generation.

And, sure enough, Sarah Michelle Gellar, Freddie Prinze Jr. and Matthew Lillard helped the gang and the sleuth-solving dog bring in a whopping $268 million worldwide, according to Deadline.

That site says another movie is in the works, and Cinema Blend pipes in with the added dimension that nobody is quite sure if it’s going to be another cast-driven feature, or a cartoon, like back in the 1960s, when Hanna-Barbera brought to kiddies everywhere on Saturday mornings.

There have been many cartoon versions, short form and move length, big and small screen, since.

I’m rooting for a return of the animation. Old school, you know, with all the new technical twists.