For people to come make and listen to music

On any given Saturday night, Syracuse twenty somethings file into what looks like an abandoned store front on the ground floor of an old, red brick apartment building on East Fayette street. Through the blacked out windows is one of the best kept secrets Syracuse has to offer: Badlands DIY Space.

Inside is a large, mostly empty space with black painted walls. Tin work lights are clamped to the ceiling and extension cords snake along towards the back of the room, where musicians leisurely set up while chatting with friends who’ve come to see them play.

The small, local venue is mostly run by volunteers. Past the door, two of them sit to the right, behind an old kneehole desk. A few dollars gets an X on the back of your hand as the “Badlands Rules,” poster hangs like a silent bouncer on the wall behind. 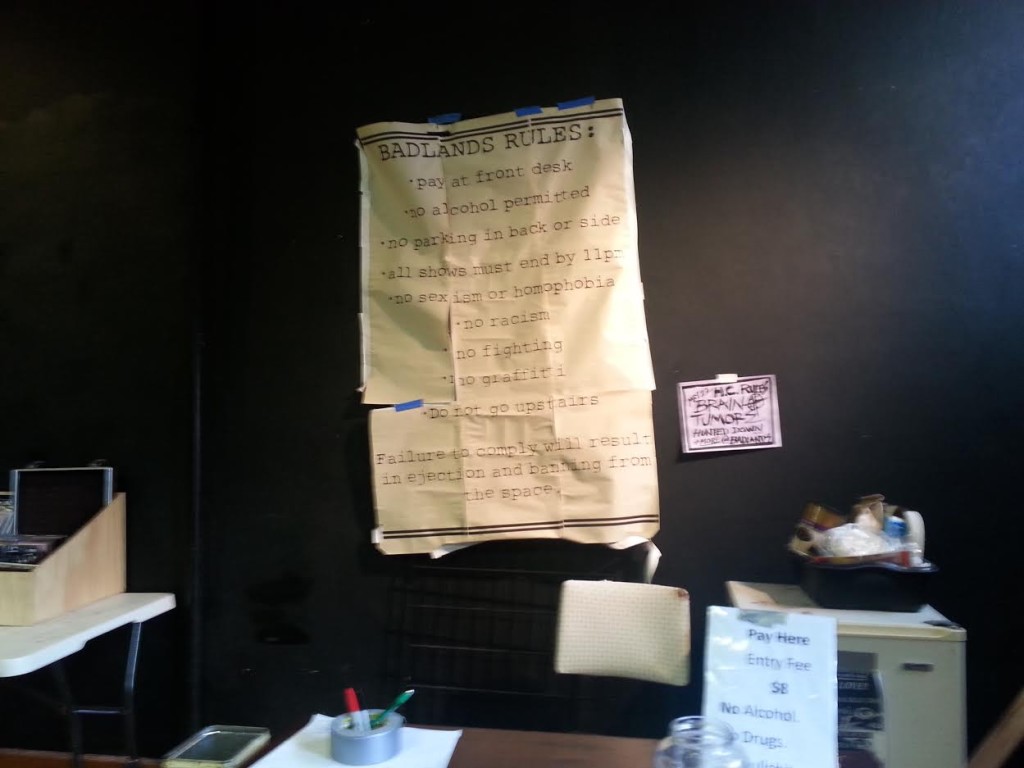 On Saturday June 14, the evening’s show is acoustic. Much quieter than the typical Badlands offerings. Up first is Rob Button, performing his solo project: S P A C E G O D ! Button has played in seven bands who have all performed at Badlands. Everyone sits around him on the ground, while Button makes conversation with the audience between songs, mostly friends of his. 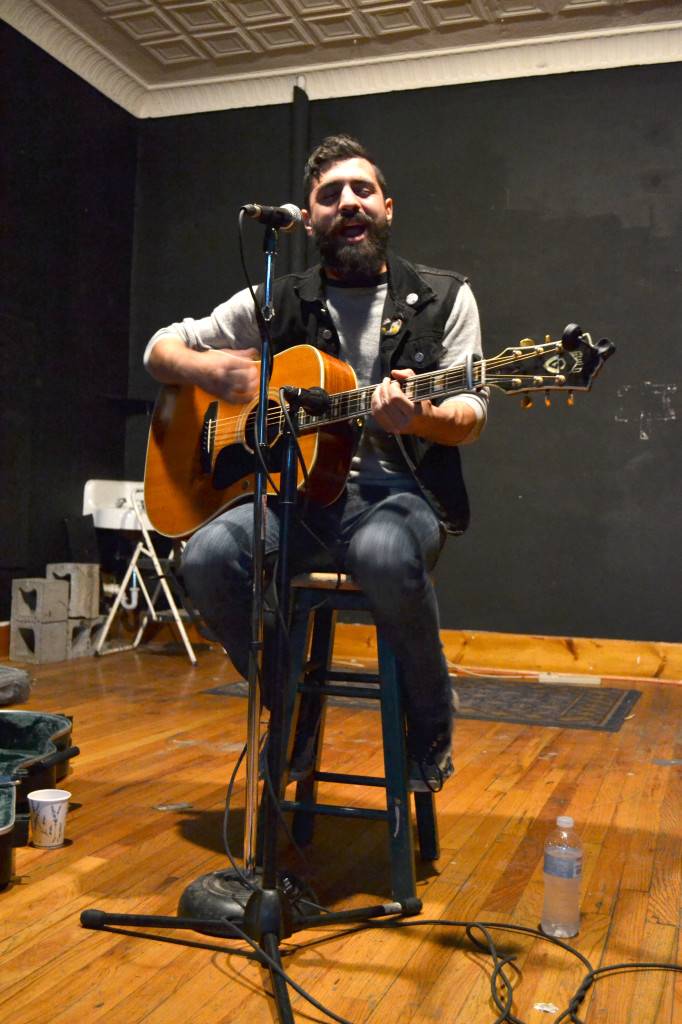 building that now houses the venue. “We finally had a DIY all ages venue that was run by the scene,” Rob reminisces after his performance.

Since then, Badlands has striven to keep itself a safe, no strings attached environment for people to come make and listen to music. In the summer, Badlands oftentimes hosts up to three shows a week.

After Rob’s performance, everyone escapes outside into the fresh evening air while the band Late Earth, a pairing of Evan Bujold and Destynee Raines, set up for their performance.

The crowd for this show is intimate, partly because acoustic shows never draw the same crowd as hardcore and punk shows, the meat and potatoes of Badlands, and partly because Badlands does no advertising. Aside from the occasional flyer found in the Westcott Nation put up by the bands themselves, everyone who goes to a show at Badlands goes because a friend told them about it. 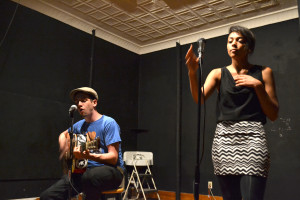 As Late Earth performs, a few more people find their way in. Friends of the band, apparently, as they are heckled good naturedly from the stage for their lateness.

Everyone works if the working’s good at Badlands. When Rob is done performing, he becomes the sound man for the other two acts, and when Evan isn’t performing, he becomes the photographer. He was also this show’s organizer and producer. He invites a third performer up, a friend he’d met at a Funk n’ Waffles open mic night named Bruce Pandolfo, a poet known as AllOne.

Badlands has a whole different atmosphere when a poet is performing. Everyone sits on the ground while he speaks, sometimes mic’d, sometimes not. Sometimes wearing shoes, sometimes not. It feels like you’re at a late night prayer meeting, with the poet backlit by the tin lights while sounds and lights from the street are blacked out behind you. It’s all very solemn, very sacred, very underground.

But like all good things underground, they don’t last long once the people above start pulling at the roots. Badlands will be closing its doors for good on June 28, due to a conflict of interest with the landlord. It seems that despite their best efforts to be respectful, neighbors don’t appreciate living above a punk venue. 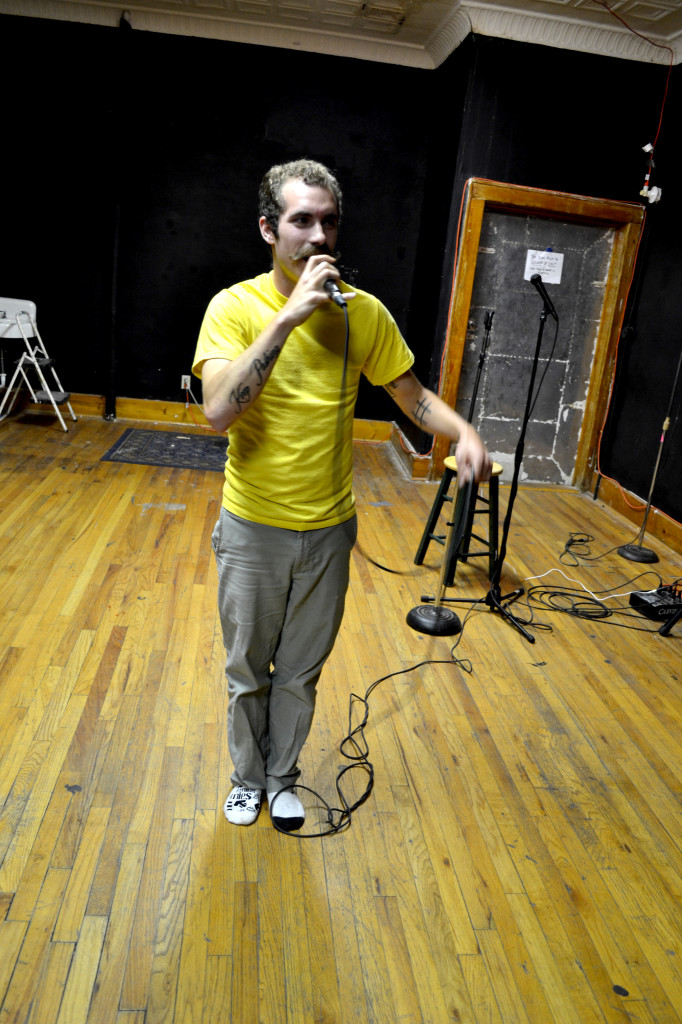 The volunteers pass out a flyer for Assault City Fest IV, the biggest, longest, loudest, final hardcore show at Badlands. They say there might be a spiritual successor at a different location but no one seems to know for sure.

Haley, one of the volunteers who’s been around since the beginning, says “I’ll be sad to see the space go but I’m looking forward to seeing what we’ve got in the works!”

It seems impossible that Badlands could be gone for long. Badlands popped up like a weed in Syracuse because there was a need for it. Even when the space is gone, the need will still exist. There’s little doubt among the regulars that Badlands, or something just like it, will be back soon, and when it does, it’ll be just as loud, if not louder than before.