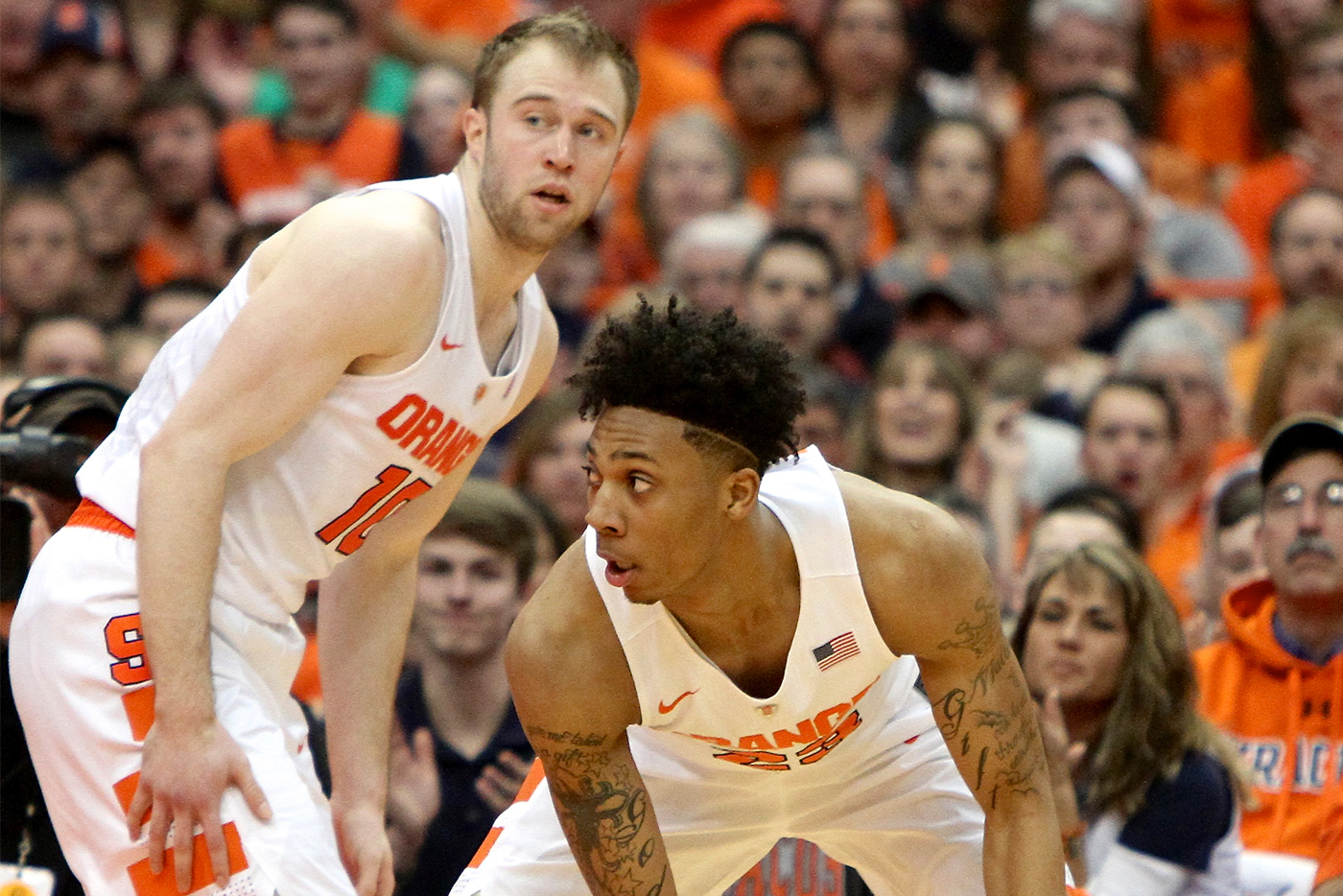 History is in the making for both SU basketball teams.

Following the Syracuse University men’s basketball team’s March 18 win over Dayton in the first round of the NCAA Tournament, Orange fifth-year seniors Michael Gbinije and Trevor Cooney were asked if the victory was especially satisfying because so many college basketball pundits said SU didn’t belong in the tournament.

Syracuse coach Jim Boeheim jumped in before they could answer. “Nobody that said we didn’t deserve (to be) in knows anything about basketball, so we didn’t think about it,” Boeheim said, mixing his pronouns but you get the point. “They were just doing it to be cute. We don’t need to react to those things, and these guys don’t listen to that stuff.”

But when CBS sideline reporter Dana Jacobson asked Gbinije a similar question following the Orange’s second-round win over Middle Tennessee, Gbinije had a better and more honest answer. Specifically, Jacobson asked what Gbinije would say to all of those experts who said SU didn’t deserve an invite. 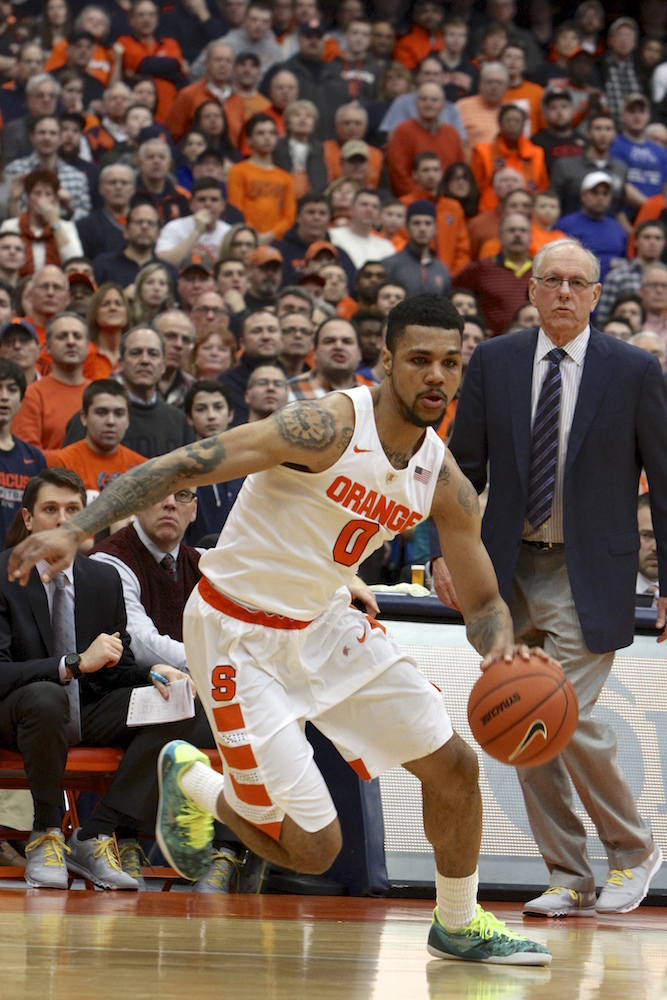 “Thank you for the motivation,” Gbinije said, smiling at the camera before hustling off to the joyous Orange locker room.

Clearly, this is a motivated and rejuvenated Orange bunch that was left for dead two weeks ago, when SU’s frantic comeback fell short against Pittsburgh in the Atlantic Coast Conference Tournament. Cooney, who missed a last-second 3-pointer that would have won the game, called it “one of the toughest losses I’ve ever had.” Having lost five of their last six games, and having finished below .500 in the ACC (9-10, counting the tournament loss), Boeheim and the Orange fully expected to be sitting out the NCAA Tournament dance.

But citing SU’s five wins over top-50 teams, the NCAA Tournament Selection Committee gave the Orange an at-large berth and a No. 10 seed in the Midwest Region. Syracuse’s vaunted 2-3 zone defense confounded No. 7 seed Dayton, which couldn’t make a layup, and No. 15 Middle Tennessee (on March 20), which couldn’t make a jumper, and the Orange received offensive contributions from all seven of its regulars as SU blitzed Dayton 70-51 and Middle Tennessee 75-50 to earn the 19th “Sweet 16” appearance in program history.

“I think that last loss to Pitt really woke us up, and we really turned it up a notch,” said Orange center DaJuan Coleman, a Jamesville-DeWitt High School product who had eight points and five rebounds against Middle Tennessee.

The Orange did catch a break when Middle Tennessee pulled off one of the biggest upsets in tournament history by shocking Big Ten Conference champion and No. 2 seed Michigan State in the first round. (Be honest.: You had Michigan State beating Syracuse in your tournament bracket, didn’t you?)

“Bottom line is, you get in, you have that opportunity and you’re going to have to beat somebody good,” Boeheim said. “It’s as simple as that. I’m sure everybody thinks we’re happy that Michigan State got beat, but this team beat them. It’s not like it’s going to be an easy game.”

It wasn’t as easy as the final score indicated because the Orange, leading just 40-39 midway through the second half, went on a 21-2 run to end the Blue Raiders’ quest to become just the second No. 15 seed to advance to the Sweet 16. Now, SU (21-13) faces another double-digit seed as it meets No. 11 Gonzaga (28-7) at around 9:40 p.m. on Friday, March 25, at the United Center in Chicago, with the winner facing either No. 1 Virginia or No. 4 Iowa State in the Elite Eight.

Like Syracuse, Gonzaga is seemingly saving its best for the postseason as the Bulldogs routed No. 6 Seton Hall by 16 points and No. 3 Utah by 23 in the first two rounds in Denver. Gonzaga’s twin towers — 6-foot-10 forward Kyle Wiltjer (20.4 points, 6.4 rebounds per game) and 6-11 forward Domantas Sabonis (17.5, 11.7) — will be a handful for SU’s smaller frontcourt players. And Wiltjer and Sabonis anchor a defense that limited Seton Hall’s Isaiah Whitehead, an all-Big East Conference first-teamer, and Utah’s Jakob Poeltl, the Pac-12 Conference Player of the Year and NBA lottery prospect, to their lowest scoring outputs of the season.

But the Orange is battle-tested, having played nine games against seven of the Sweet 16 teams this season (North Carolina, Virginia, Duke, Miami and Notre Dame from the ACC, plus Texas A&M and Wisconsin). And Boeheim said when SU is making shots, like it did against Middle Tennessee (shooting a season-high 55.1 percent), the Orange can play with any team in the country.

Another team that’s looking ahead is the Syracuse women’s basketball team, which reached the Sweet 16 of the women’s NCAA Tournament for the first time in program history. Coach Quentin Hillsman’s Orange, the No. 4 seed in the Sioux Falls Region, will face No. 1 South Carolina at either 7 or 9:30 p.m. on Friday, March 25, at the Sanford Pentagon in Sioux Falls, S.D. (The game time was not determined until after the Syracuse New Times went to press.)

“It was just one of those feelings where it was a long time coming,” said Orange redshirt junior guard Brittney Sykes, who scored a game-high 24 points against Albany, tying a school record for the NCAA Tournament. “This program has been building itself since Coach Q began it and now that we’re going to the Sweet 16, we can go farther than that.

“It’s just an amazing feeling for our players,” Hillsman said. “They work hard and they really deserve this moment. I am happy for them. We are really excited to be moving on to the next round.”

Against Albany, junior guard Alexis Peterson scored 15 points in the first half and hit a key basket late in the third quarter when the Great Danes, who had overcome a 17-point deficit to upset No. 5 seed Florida in the first round, appeared poised to make another comeback. But the Orange, which was ousted in the first round of the tournament in 2013 and the second round in each of the last two years, finally broke through to the Sweet 16.

“We’ve worked extremely, extremely hard to get to this point,” Peterson said. “The last couple of years we’ve come up short, so to get over this hump is big for us and it’s big for our team.”

News and Blues
Upstate Uber: One Day Only
To Top