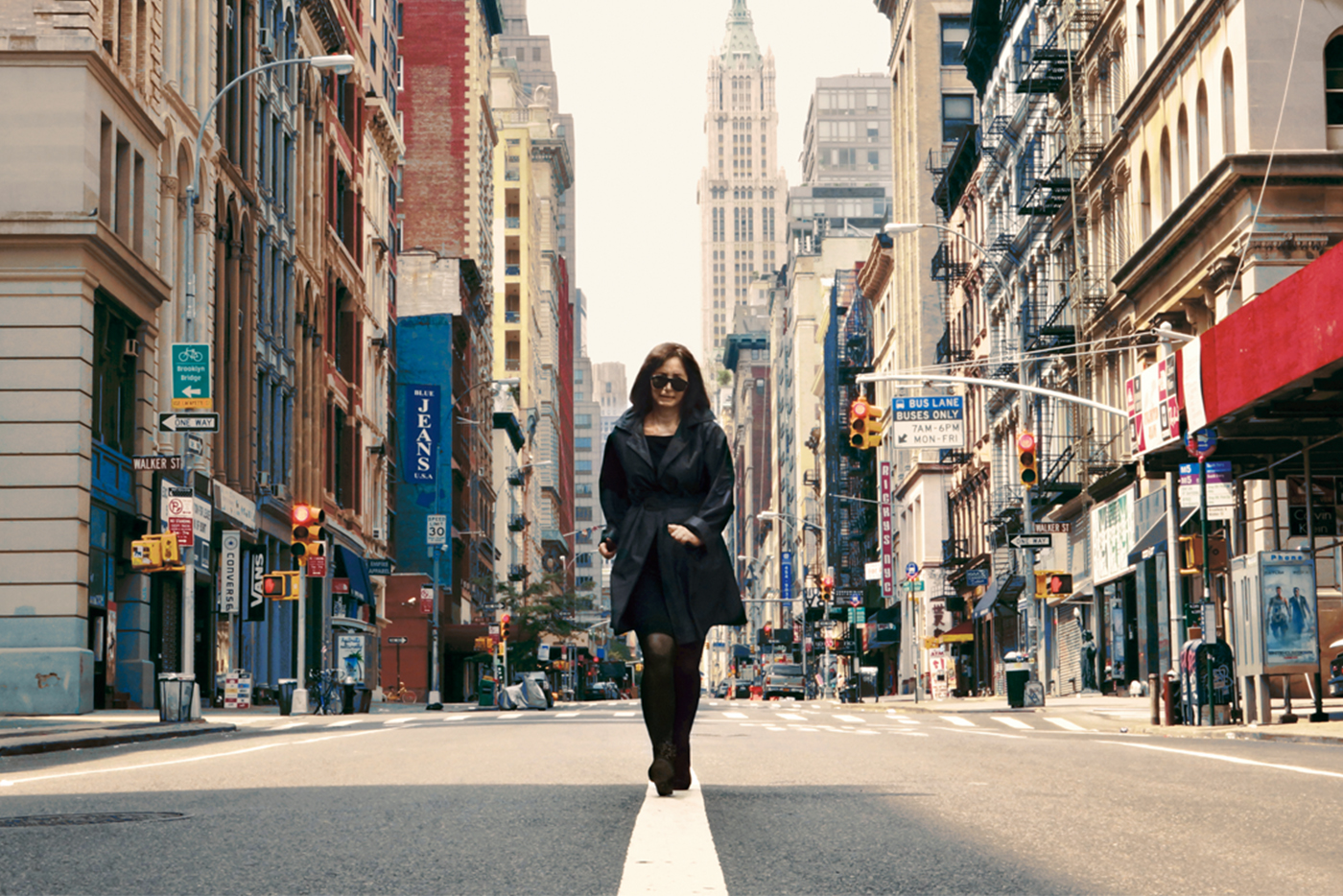 The ambitious exhibit Seen and Heard: An Active Commemoration of Women’s Suffrage sweeps across several galleries at the Everson Museum of Art. It presents recently commissioned artworks and pieces from the museum’s collection, and also pulls together a range of media: video and installations and sculptures, photos and music by Donna Summer and Gloria Gaynor.

The display premieres Jessica Posner’s 40-minute film Butter Body Politic, and displays her sculpture interpreting Woman of Willendorf, a tiny figure found at a Neolithic site in Germany. It also encompasses Yvonne Buchanan’s multimedia discussion of Harriet Tubman. And it presents Unsettled Matter, Holly Zausner’s short video in which she seems to be the only human left in Manhattan. 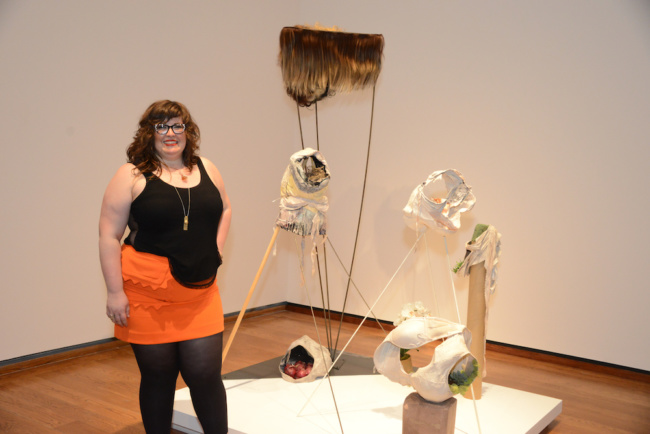 Jessica Posner is a feminist artist who creates experiences, objects, images and language in response to cultural, historical and structural violence against female subjects.

The exhibition, presented as a celebration of the 100th anniversary of the passage of women’s suffrage in New York state, is comfortable with unconventional narratives, an emphasis on works with social and political implications, and challenging viewers.

Seen and Heard pivots off the work of Barbara Kruger, a conceptual artist who has long integrated text into her collages and focused on how information is distorted and dispensed. In one piece, she incorporates two questions: “Who Speaks?” and “Who Is Silent?” In a series, she subverts a cliché: “Children Should Be Seen and Not Heard.” The words appear but in a different visual context, as the artist suggests that there are groups of adults whose voices are little heard or not at all.

Jessica Putnam Phillips, who once served as a military intelligence specialist in the U.S. Air Force, has seven plates on display. Each depicts a woman in the armed forces, and there’s a contrast between the porcelains, associated with the domestic realm, and women experiencing military life.

Dario Robleto references pain bullets used during the Civil War when soldiers typically had surgery without anesthesia. During an operation, a patient would bite down on a pain bullet. Robleto has made “bullets” from vinyl albums featuring musicians imperiled by violence. They include Bob Marley, wounded during a political rally in Jamaica, and John Lennon, murdered in New York City.

The exhibit presents a large bronze sculpture by Cassils, an artist and bodybuilder who rejects being identified as either female or male. Photographs show the artist wrestling with the sculpture, “Resilience of the 20 Percent,” which was created to publicize and condemn violence against transgender people.

In a second-floor space, Buchanan has several artworks on display. They include a wall map representing the North Star, which Tubman followed as she escorted runaway slaves northward; a ceramic head portraying her and positioned on a ladder; a video blending divergent images such as scenes from black exploitation movies of the 1970s; a photo of white suffragettes marching for the right to vote; and footage of Buchanan running through a forest and recalling Tubman’s journeys.

Posner also works in various media. She assembles girdles, compression garments and other clothing to explore objectifying of women’s bodies. 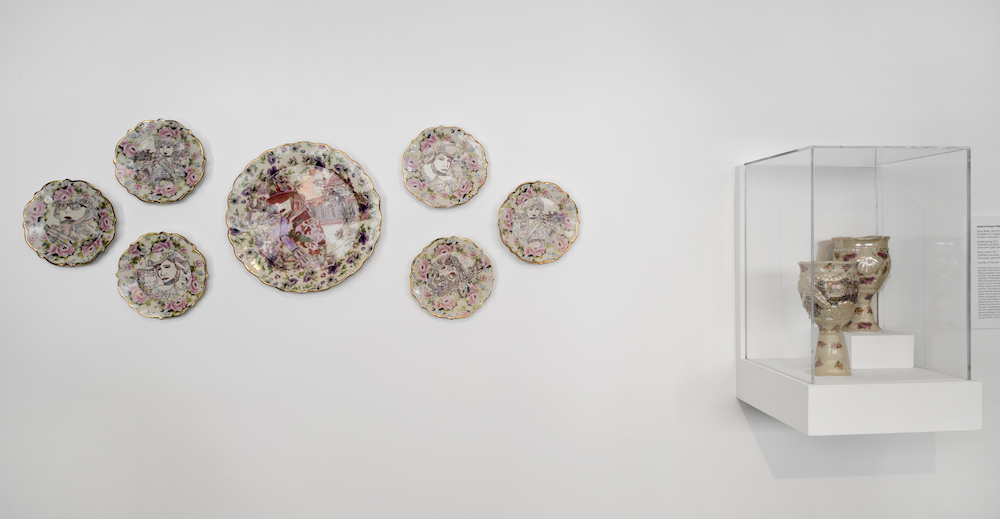 Her film Butter Body Politic is political and personal, as it uses butter as a metaphor for fat and as a tool for delving into violence against women. Posner, Sayeh Echo and David Greer are seen on a dairy farm in Western New York, where they walk onto a pasture reserved for pregnant cows. Later, Posner and Greer smear butter on each other and say the same sentence over and over again.

This isn’t sing-song dialogue: It’s absurd, comic and poignant. The film communicates emotional vulnerability and offers possibilities for dealing with pain and trauma.

The show presents an array of other works, including Kevin Snipes’ fine sculptures. He draws on pottery, creating quirky pieces. “Disco Diversion Unit,” by Stella Marrs, combines an inflatable sculpture, music from within, and a caption stating that singers like Donna Summer helped pave the way for Beyonce and other contemporary performers.

D.J. Hellerman, the show’s curator, drew from the Everson’s collection by selecting “Not Manet’s Type,” a series of striking images by Carrie Mae Weems. The photos depict the artist herself and comment sardonically on how well-known artists have portrayed women in general and specifically women of color. 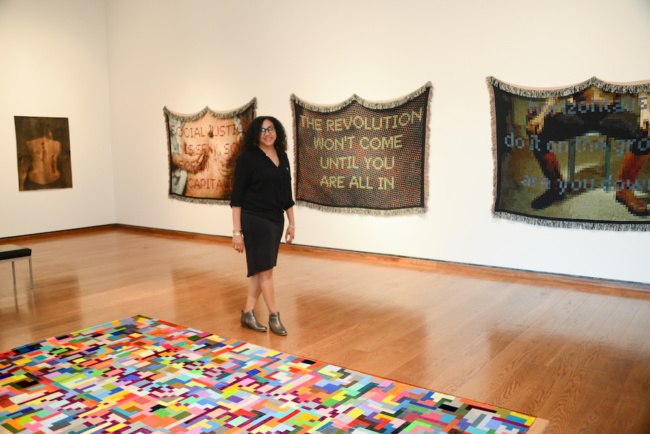 And there are artworks by Mildred Beltre, an artist and activist who considers how society might be reconfigured. She has pieces on cloth and other materials presenting text such as “Non-Hierarchy Means That You Have to Take Turns” and “Social Justice Is Sexy.”

These, and other pieces, are part of a large exhibit that demands viewers’ full attention. Snipes, for example, is a talented sculptor, but the social implications of his work aren’t entirely clear. Similarly, disco music was wildly popular during the 1970s; by 1976, an estimated 10,000 discotheques were operating across the country. Yet explaining its cultural influences is more than can be expected of one artwork.

Seen and Heard clearly has its strengths: a penchant for risk taking, presentation of works from the collection, a willingness to showcase artists who live locally, displays of various media. Ultimately, it’s a wide-open exhibition that asks museum visitors to keep their eyes and ears open.