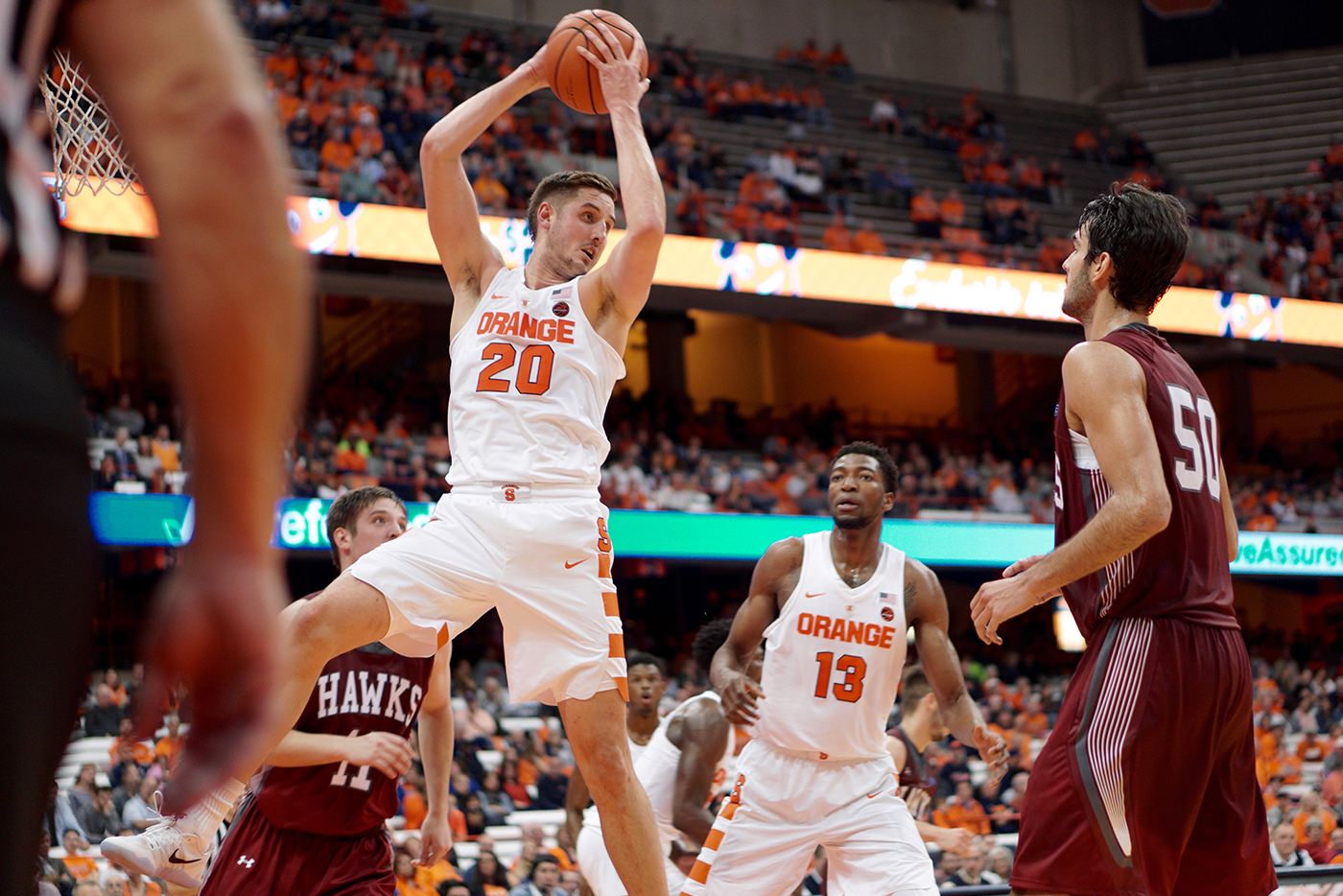 Last March, the Syracuse University men’s and women’s basketball teams transformed Syracuse into the center of the college basketball universe as SU became just the ninth different school to have both of its teams in the Final Four in the same year.

And what made it extra special was that no one — and we mean NO ONE — saw it coming.

The Orange men’s team lost their first four and four of their last five Atlantic Coast Conference games last season, and then lost to Pittsburgh for the third time in their first ACC Tournament game. Despite a 9-9 ACC record and 19-13 overall record, and much to the chagrin of many “bracketologists” and college basketball analysts, the Orange received a bid to the NCAA Tournament as a No. 10 seed and defeated Dayton, Middle Tennessee, Gonzaga and No. 1 seed Virginia before losing to No. 1 overall seed North Carolina in the Final Four.

After getting blown out in back-to-back games to national powers Notre Dame and Louisville in late January, the SU women appeared to be destined for another year of being good enough to make the NCAA Tournament but not nearly good enough to challenge for the national title. But after those losses, the Orange won 16 of their next 17 games and defeated four ranked teams, including Louisville in the ACC Tournament and No. 2 South Carolina in the Sweet 16 of the NCAA Tournament. Playing in their first Final Four, Syracuse reached the championship game before losing to Cicero-North Syracuse High School alumna Breanna Stewart and the juggernaut Connecticut Huskies.

As the SU men and women prepare for Friday’s 2016-2017 season-opening doubleheader at the Carrier Dome (the women vs. Rhode Island at 3 p.m. and the men vs. Colgate at 7 p.m.), the prevailing question around here is this: What are the chances they can do it again?

Considering that the men have reached the Final Four once a decade since the 1970s, and considering that the women had never reached the Final Four before last season, it would appear the odds of a repeat are slim. But that hasn’t stopped local fans from dreaming big, although SU coach Jim Boeheim tried to tap the brakes on that thinking following SU’s first exhibition against Indiana University of Pennsylvania Nov. 1.

“The only place where people are picking us to be a Final Four team is in Syracuse. That’s fandom,” said Boeheim, who’s starting his 41st year at the Orange helm. “That’s a good thing; we like that. But I don’t think the rest of the country is picking us anywhere. Maybe they’re all wrong. We can hope that’s true. I hope they’re wrong. I hope the people who are thinking those crazy things around here are right. But we won’t know for a while, for sure.”

Women’s 11th-year coach Quentin Hillsman, on the other hand, is embracing the talk of a return trip to the Final Four as he continues to engineer SU’s steady climb from a 9-20 record in his first season in 2006-2007 to the Orange’s first appearances in the Sweet 16, Elite 8 and Final Four last season.

“Last year was a remarkable year; that’s our standard. We’re going to continue to strive for that,” Hillsman said at a media day in late October. “We’re not going to apologize for talking about championships around here, because it’s important to us.”

It’s important to SU fans, too, so let’s look at both teams and the reasons why they should, at the very least, return to the NCAA Tournament this March:

Following a 66-52 loss to Pitt on Feb. 20 at the Dome, Boeheim was asked about forward Tyler Roberson, who took one shot and had four rebounds in 25 minutes as SU was beaten by 20 on the boards. “If I had anyone else,” Boeheim said, “he wouldn’t play a minute.” 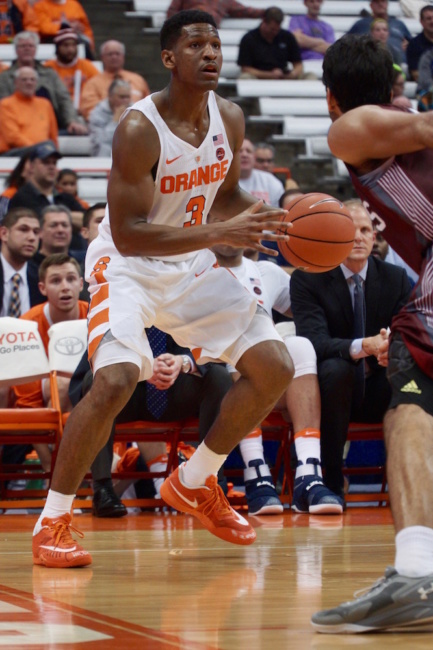 We’re not bringing that up to pick on Roberson, who redeemed himself in the NCAA Tournament, but to emphasize a point: This season, Boeheim will have plenty of options as his roster will go nine or 10 deep. In the exhibition against IUP, Boeheim used 18 different lineup combinations and the tinkering will continue throughout the early part of this season as Boeheim learns more about the team’s six new scholarship players.

“We can do everything, especially defensively since we are really long,” said freshman guard Tyus Battle, who shot 4-of-5 from 3-point range and scored a team-high 16 points against IUP. “We really get after it on offense since we have a lot of options. We have shooters. We have big men down low. Everyone on this team has the potential to get playing time.”

The outlook wasn’t so rosy in the spring, with SU’s top three scorers either graduating (Michael Gbinije and Trevor Cooney) or leaving for the NBA (Malachi Richardson). And the transfers of Kaleb Joseph to Creighton and Chinonso Obokoh to St. Bonaventure left the Orange with four returning scholarship players (forward Tyler Lydon, center DaJuan Coleman, point guard Frank Howard and power forward Roberson) to team with incoming freshmen Battle and forward Matthew Moyer and redshirt sophomore center Paschal Chukwu, who sat out last season after transferring from Providence.

But then 6-foot senior point guard John Gillon transferred from Colorado State, where he averaged 13.2 points and 3.8 assists per game and shot 33 percent (60-for-180) from 3-point range. And then the Orange signed Taurean Thompson, a 6-10 power forward from Brewster Academy in New Hampshire who was rated by ESPN.com as the No. 75 recruit in the 2016 class and signed late after considering Michigan State, among other schools.

And in another better-late-than-never addition, the Orange in late August added 6-7 wing player Andrew White, a fifth-year graduate transfer who averaged 16.6 points and 5.9 rebounds per game at Nebraska last season. White chose the Orange over Michigan State, Miami, VCU and several other schools that wanted him.

And just like that, Boeheim had the kind of depth that will enable him to press more and perhaps even play some man-to-man defense, although the 2-3 zone will remain SU’s primary defense. Depending on the opponent, Boeheim can go big or small, fast or half court, and he won’t have to worry as much if someone other than Lydon picks up a few early fouls.

Now the disclaimer: It’ll take a little time for the new players to mix with the old ones, and some players must accept that they’re going to play and score less than they might have expected. But if it all comes together, the Orange will be a legitimate Final Four contender.

Before last season, Hillsman and the Orange always thought they could emerge as one the nation’s elite teams. Now, they know they are. 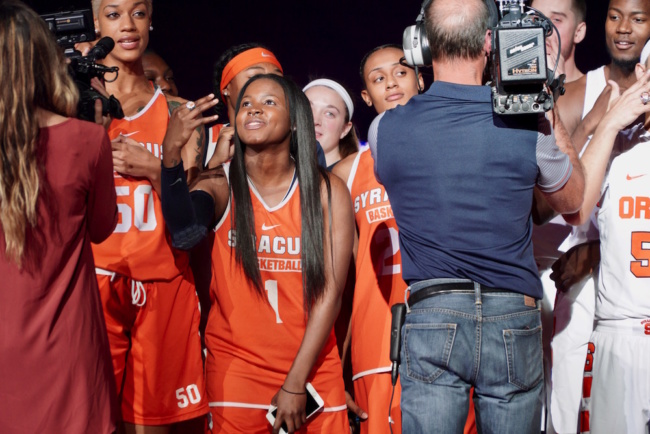 “I think that until you get to a point where you start winning some of these big games, it’s just talk,” Hillsman said. “It’s not talk anymore, because we’re playing our style, we’ve been successful and we’re ready to move on to continue to do the same thing.”

The Orange shocked its NCAA Tournament opponents by playing at a frenetic pace that included a barrage of 3-pointers. SU returns four starters from its first-ever 30-win team–2017 Nancy Lieberman Award candidate Alexis Peterson, All-Final Four honoree Brittney Sykes, leading rebounder Brianna Day and forward Isabella Slim–and Hillsman said his players are “in the best shape right now than we’ve ever been in” and that will enable the Orange to continue to push tempo and play fast.

If the SU offense is a machine, Peterson is the engine as she ranks among SU’s all-time leaders in points (1,207) and assists (3.6 per game). She turned her game up a notch in the postseason, averaging 20.7 points per game in SU’s nine ACC and NCAA Tournament games.

With Peterson leading the way and Connecticut diminished by the loss of Breanna Stewart, the Orange has one goal in mind and the players aren’t afraid to say it.

“We are looking forward to playing our best, every game, every night,” said Orange senior center Bria Day, Brianna’s sister. “We are trying to make it back to where we went last year, get to the national championship game and win.”

Poll Position: The SU men’s team is ranked No. 19 in the AP Preseason Poll and the SU women are ranked No. 14, but both teams will have trouble reaching their own league’s “Final Four,” according to the pollsters. SU is ranked fifth in the country among ACC teams (behind No. 1 Duke, No. 6 North Carolina, No. 8 Virginia and No. 13 Louisville), while the women are tied for fourth in the nation among ACC teams (behind No. 1 Notre Dame, No. 5 Louisville and No. 12 Florida State and tied with No. 14 Miami).

Employee of the Month: Greg Minix
Season Greetings
To Top