Let’s face it: There was a good chance this year’s Syracuse University men’s basketball team wasn’t going to make the NCAA Tournament anyway.

But that’s not the point. The saddest part about SU’s self-imposed postseason ban is that this year’s team, which plays every possession like it’s an NCAA Tournament game and had nothing to do with the violations that led to the ban, deserves the opportunity to either play its way in, or play its way out.

The players lost that chance Feb. 4, when Syracuse officials announced a self-imposed ban that will keep the Orange out of the NCAA, NIT and ACC tournaments. The ban is part of SU’s case pending before the NCAA Committee on Infractions. Syracuse is still waiting for the committee to release the official report of its findings after an investigation that started when SU self-reported violations to the NCAA in 2007. It’s possible the Orange will be hit with additional penalties, such as the loss of scholarships.

After the self-imposed ban was announced, Orange captains Rakeem Christmas, Trevor Cooney and Mike Gbinije released a joint statement expressing their disappointment, but also saying the ban “won’t change how hard we will continue to work in practice and games.”

Before the next game on Wednesday, Feb. 18, against Louisville at the Carrier Dome, the Orange had played three games since the ban and continues to play with heart and hustle. The undermanned Orange lost at Pittsburgh 83-77, won at Boston College 70-56 and lost to No. 4 Duke 80-72 this past Saturday, Feb. 14, before a sellout Dome crowd of 35,446–matching college basketball’s all-time on-campus attendance record set at last year’s Duke-SU game at the Dome.

“I think every game we play, we play as hard as we can, and try to do what we can,” SU coach Jim Boeheim said. “That’s what we’ve been doing all year, and that’s what we’ll keep doing.”

The Orange (16-9, 7-5 in the Atlantic Coast Conference before Wednesday) is staying competitive despite an ultra-thin bench created by the loss of injured forwards Chris McCullough and Dajuan Coleman, the inconsistent play of its backcourt (freshman point guard Kaleb Joseph and junior shooting guard Trevor Cooney), and the punch to the gut from the postseason ban.

Against Duke, Gbinije went crazy in the first half with five 3-pointers as the Orange built a 34-23 lead. Duke went on a 26-7 run at the end of the first half and start of the second half and led by as many as 11, but the Orange kept fighting and pulled within four with about four minutes left.

In the end, SU didn’t have enough to overcome Duke’s star freshman center Jahlil Okafor (23 points, 13 rebounds) and the Blue Devils’ 12-for-12 free throw shooting in the last 2:27. 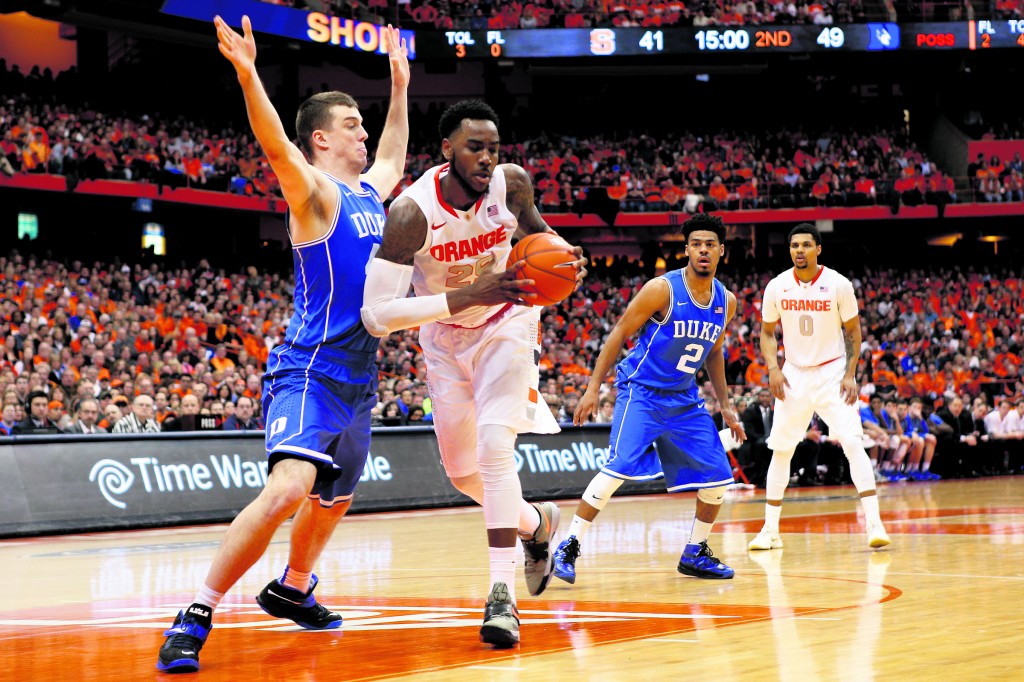 “It’s just frustrating to lose,” Cooney said. “It’s just the way we are losing because we are right there. We just need one or two more (defensive) stops and need to find a way to win close games.”

The loss was particularly frustrating because the Duke game was, for all intents and purposes, SU’s NCAA Tournament. It was also important to SU fans, since Duke has replaced Georgetown as the team Syracuse loves to hate. Last year’s memorable games–SU’s overtime win at the Dome and Boeheim’s first-ever ejection in a loss at Duke–helped make this year’s game once again the hottest ticket in town. And it doesn’t hurt the rivalry that Duke coach Mike Krzyzewski (1,005 wins) and Boeheim (964) are the winningest coaches in Division I basketball history.

“I think it’s a great rivalry because we both have built some unique programs, and it gets center stage,” said Krzyzewski, who counts Boeheim among his closest friends. “That’s good for the league, you know.”

What isn’t good for the league is to have one of its marquee programs ineligible for the ACC Tournament. The Orange can still make an impact on the league, however, as its games will count in the standings and therefore in the ACC Tournament seeding.

From a player’s perspective, that doesn’t sound like much to play for. But the Orange players have demonstrated that they’ll keep playing hard and at least continue to make this shortened season an entertaining one.

What are you doing next September? If you’re a Syracuse University football fan, you’ll be spending a lot of time at the Carrier Dome as the Orange plays its first four games at home in September. For the schedule and ticket information, visit www.Cuse.com.