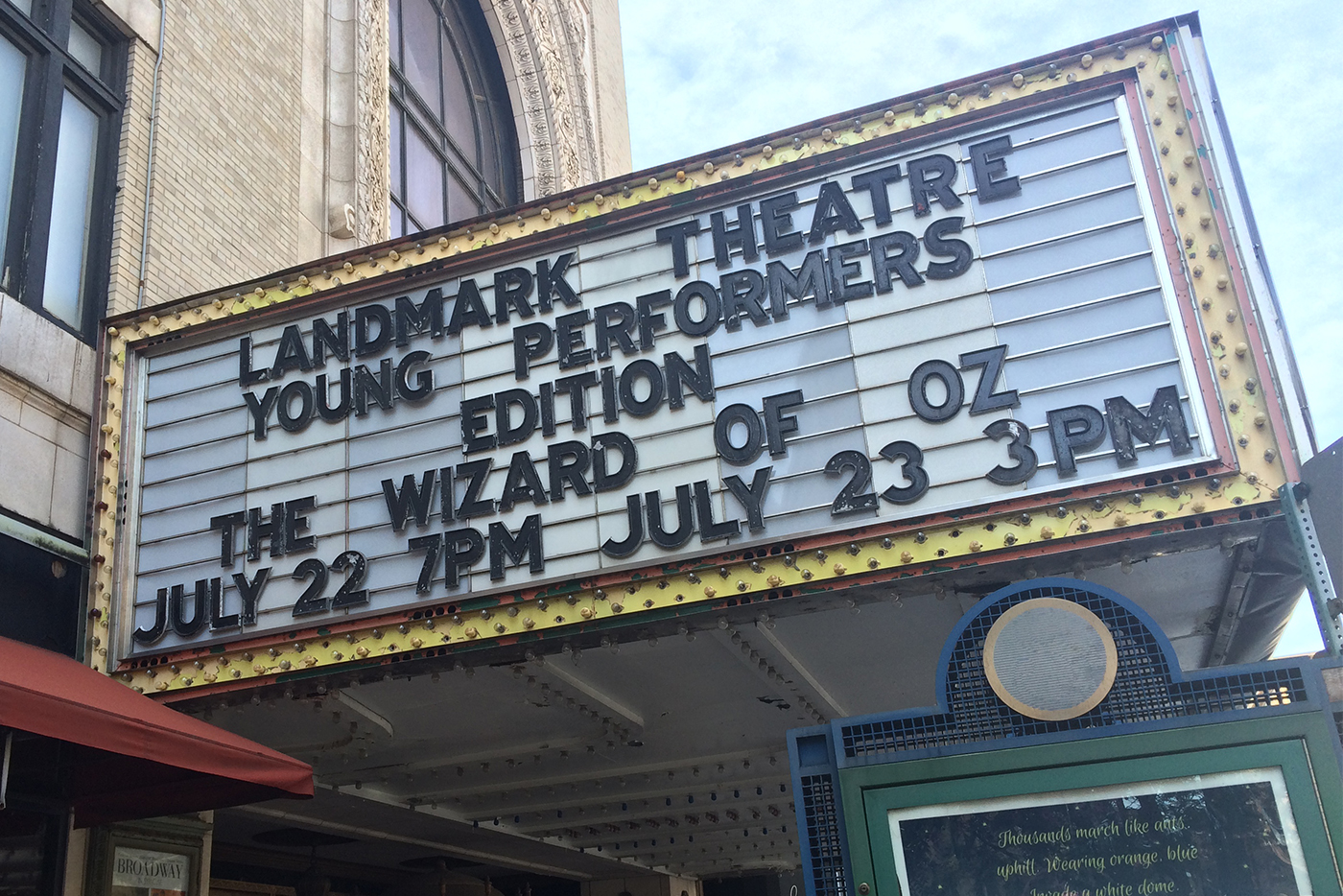 There were no surprises when Tammy Jace watched the final live performance of The Wizard of Oz at the Landmark Theatre. She had already seen the dancers simulate the cyclone that would take Dorothy out of Kansas and heard the Cowardly Lion’s wisecracks the night before. But sitting a few rows from the stage for the Saturday matinee, Jace remained entranced. Her 10-year-old son, Tanner, was in the chorus. He briefly took center stage to sing as a member of the Lollipop Guild.

“I can’t believe that in two weeks they pulled off such a show,” Jace, of East Syracuse, said following curtain call.

After opening with an audition day July 11, the Landmark’s musical camp presented the young performer’s edition of The Wizard of Oz July 22 and 23. The camp was open to children age 16 and under, including preschoolers. Now in its third year, the program has grown thanks to returning campers and an experienced staff, organizers said.

This year, 100 children — the maximum allowed — participated, according to Mike Intaglietta, the theater’s general manager. Intaglietta said that what sets this camp apart from other summer programs is that the kids can walk away having created something together.

“These kids are the next generation of Central New York theater talent,” he said.

Directors Michelle Currier and Virginia Labatos, both music teachers in the East Syracuse-Minoa Central School District, admitted they didn’t know what they were getting themselves into the first year. They started the program, which runs in the summer and fall, with about 30 kids. Since then they’ve put on five productions with choreographer Amy Just.

The teachers encouraged their own students to participate, and several members of the latest cast were veterans of such Landmark shows as last summer’s production of “The Little Mermaid,” and “Beauty and the Beast,” performed last December. Performing on the Landmark’s professional stage was a big step up from school productions in the cafeteria.

One of those returning students was Grace Caccamo, who portrayed the Scarecrow. She made her Landmark debut in 2014 at age 10 as the narrator in the program’s first show, “Aladdin.”

“I just loved it so much I had to come back,” said Caccamo, who went on to play Scuttle in “The Little Mermaid” and Cogsworth in “Beauty and the Beast.” Now 12 and attending Pine Grove Middle School, Caccamo said she intends to continue until she is too old for the youth program.

As the program has grown, so has each production. The Wizard of Oz featured hundreds of costumes. Still, the sets remain relatively minimal. A rocking chair served as Auntie Em’s front porch. Hay bales and fencing provided a home for the Scarecrow. But the stage rarely remained bare thanks to dozens of singing munchkins or screeching flying monkeys — roles that allowed the preschoolers in the show a chance to get onstage without having to learn too many lines.

Reflecting on how their own experiences in drama club and theater camp influenced them, Currier and Labatos explained that the theater program builds confidence, encourages teamwork and fosters an interest in the arts.

“Maybe a couple of these kids will grow up to be music teachers or even performers,” Currier said.

That’s what Sophie Hartz, who portrayed Glinda, intends to do. The 14-year-old, who attends East Syracuse Minoa Central High School, said she would like to study music education.

“I’m definitely going into a career in music and art,” she said.

Hartz previously performed through the Landmark program as Sebastian in “The Little Mermaid” and Belle in “Beauty and the Beast.” She has also performed with the Syracuse Children’s Choir and the New York State Honor Choir. As Glinda, she performed several solos and danced in the jazzy “Jitterbug” ensemble number.

After the final curtain call, Hartz celebrated with her fellow cast members on the second floor of the theater. While she admitted it was difficult to learn her lines in the short time she had, she said making close friends made it worthwhile.

“I think it went amazing,” she said of the show. “I don’t want to change anything.”

Area theater kids have another chance to put on a show at the Landmark during the theater’s fall youth program. Interested families should check the theater’s website for an announcement of the next show in the coming weeks.