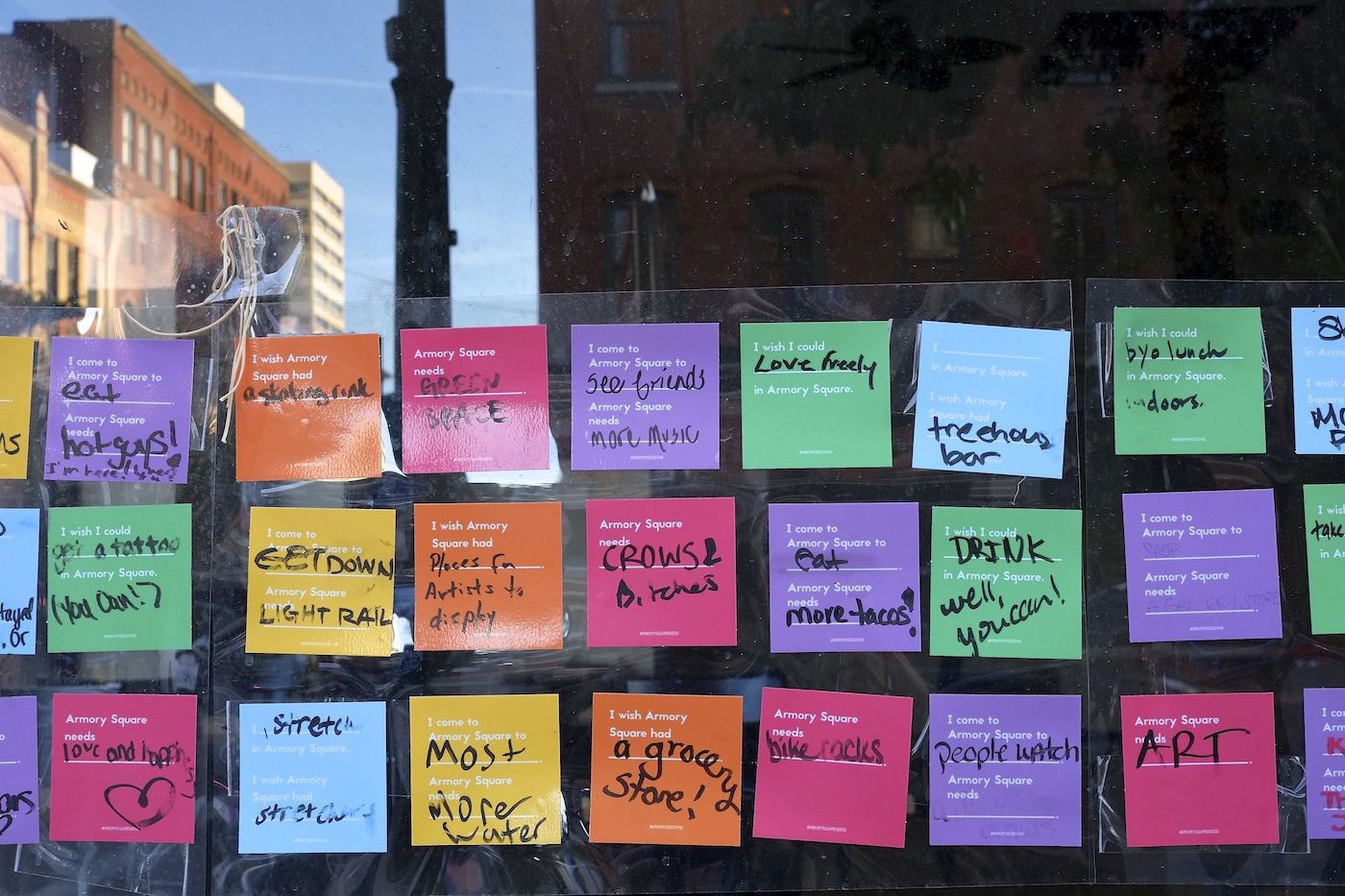 The Briana sisters are standing at the corner of Franklin and Walton streets in Armory Square, waiting to meet other family members for lunch. While waiting, they survey the 255 three-inch-square post-it stickers pasted in three rows on strips of heavy cellophane on the corner windows of the empty restaurant space in the Butler Building, which 30 years ago housed the Syracuse New Times on its second floor.

Each sticker has one or two blanks completing phrases telling why people come to Armory Square, what they do there, what they wish was there and what the neighborhood needs. A half- dozen cords, which once held black markers for filling in the blanks, hang empty. All but seven stickers have been filled in. Most responses focus on food or sex.

The sisters have no idea who put the stickers on the windows or why, but both agree it’s a cool idea. Down the block at Pastabilities, bartender Mark Hurley reflects that the display provides a wish list for the neighborhood, but would have liked it to be more about civic pride.

There seems general knowledge in the neighborhood, however, that the display is the work of local art activist Michael John Heagerty. He promoted the project as part of a Syracuse University course entitled Urban Acupuncture, the brainchild of Marilyn Higgins, SU vice president for community engagement and economic development.

The Armory Square stickers are one of the course’s three neighborhood focuses, which also include a Valley segment with former Common Councilor Bob Dougherty and one on the Near West Side (becoming known as the Salt District) with SU social work Professor Maarten Jacobs, director of the Near Westside Initiative. With the three facilitators billed as “neighborhood experts,” the course outline suggests they will provide background on the history and culture of their neighborhood, and “perhaps come to your class dinner with community members and press conference with the media and elected officials at the (Nancy Cantor) Warehouse (on 350 W. Fayette St.).”

Heagerty credits Candy Chang, initiator of the Before I Die Project, with inspiration for the sticker project, which resulted from students talking at an all-day retreat. For Heagerty, the project offers a lesson in city planning: “Taking a survey without going door to door to find out what people want.”

Responses range from the emotionally moving (“I wish I could find my dad in Armory Square,” “Armory Square needs more love”) to the more practical lifestyle needs, such as more dance clubs, a grocery store and LGBT-friendly institutions. If the stickers can’t stay in the storefront window, Heagerty says, he will move them, perhaps to Hanover Square.

“Actually, I don’t have plans to move them,” says John Butler, the building’s owner. “They didn’t ask, but when they first put them up I figured, ‘How bad can it be?’ Actually, it gets a lot of notice. (Butler is trying to rent the space, and asks that only serious inquires call 471-7016.) We’re all in this neighborhood together. It’s important that we all support each other.”