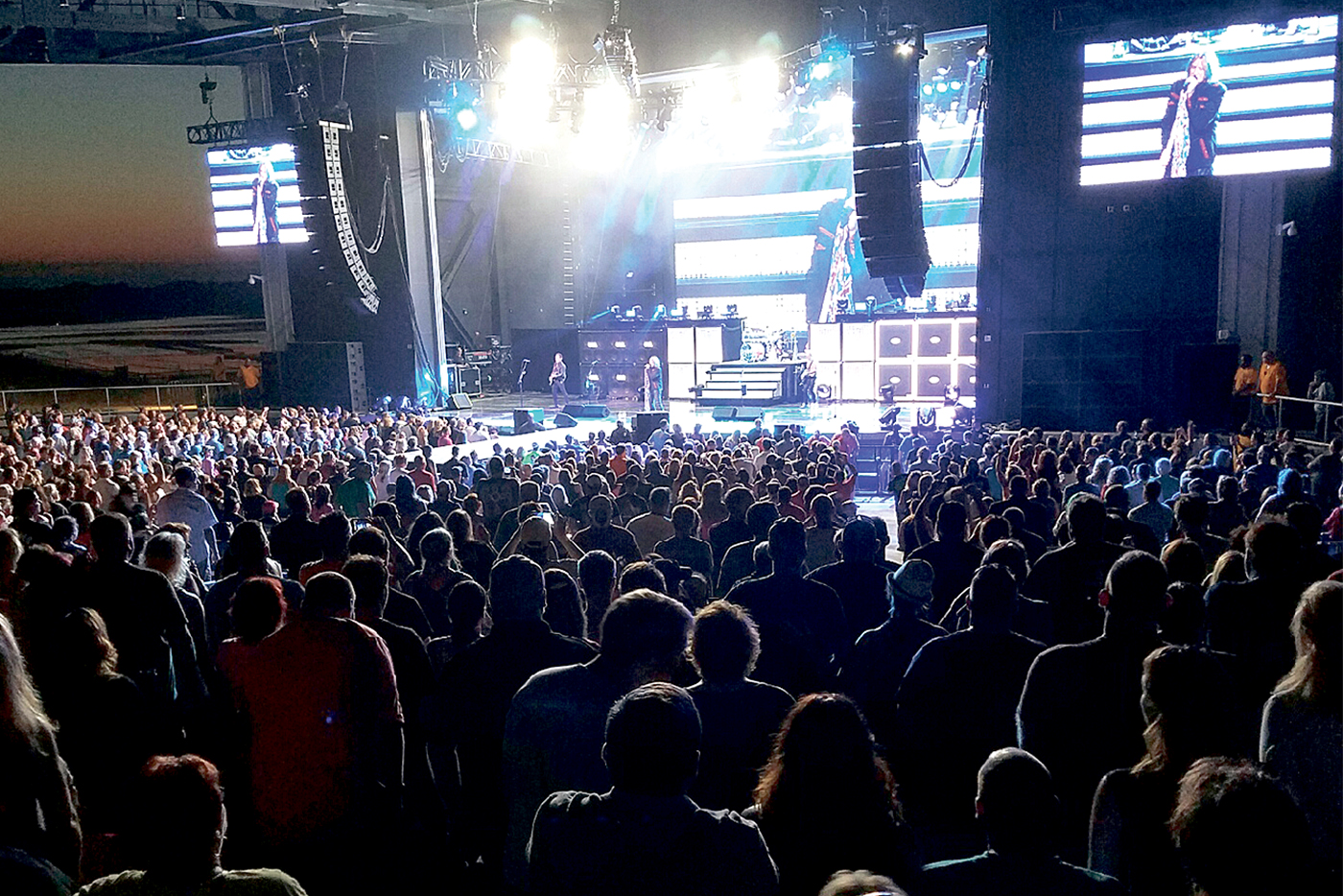 Our man turns a Def ear to the Amphithe-haters.

Stop complaining about the Lakeview Amphitheater! My advice to you naysayers is to pour some sugar on it and start rockin’.

That’s what I did Monday night, June 27, after I purchased a $16.50 beer and was assured by the nice folks at the Lending Tree that I am eligible for their “credit repair” service.

This was my first-ever visit to the new $50 million muddle by the puddle. Featured were what I mistook as a trio of cutting-edge bands headlined by someone called Def Leppard. Much to my embarrassment, I later realized that Def Leppard was founded in 1893, the same year one of Fayetteville’s own, President Grover Cleveland, granted amnesty to Mormon polygamy. (Well played, Grover, but what about the rest of us?)

The show was, like, awesome, and I don’t just mean Def Leppard and its one-armed drummer — more on that stud later. The warm-up acts, the legendary REO Speedwagon and before that Tesla, straight out of Sacramento, another hard-rockin’ hair band, all brought the same level of boundless energy and technical fluency we’ve come to associate with the heavy-metal dredging project downwind.

Yes, there are some minor issues with the venue, which, of course, was crammed down our throats by the unholy alliance of Gov. Andrew Cuomo and County Executive Joanie Mahoney. But any new facility is bound to have a few glitches. In this case it feels like nitpicking to even mention them.

There was a small number of towering, acrid brown particulate clouds swirling through the moonscape parking lot, barely enough dust for me to contemplate that the biggest financial winner here is the Delta Sonic car wash chain, home of the Touch-Less upsell. A line from Timothy Egan’s The Worst Hard Time, his award-winning chronicle  on the Dust Bowl, came to mind:

“Going to the outhouse was an ordeal, a wade through shoulder-high drifts, forced to dig to make forward progress.”

Except there were precious few outhouses in the parking lot, or anywhere. A few days earlier, at the Dave Matthews show, community organizer Lindsay Speer of Creating Change had circulated a photo she took of people crossing a fence to whiz in a nearby toxic landfill.

“What we observed were thousands of people going onto the Crucible site because there were not enough bathrooms.” Speer said.

Speer does a lot of important work in town, but in spotlighting this emergency even she might not realize that she might have prevented a mass tragedy. During the Def Leppard show, I did a little research on my cell phone as to what can happen when you pour some urine on heavy metals.

This from the New Jersey Department of Health: “Mercury can form explosive compounds with AMMONIA and will explode when mixed with …”

The list of chemical catalysts was long, daunting and familiar. I was too shaken to read them all. You wanna talk about “Bringin’ on the Heartbreak”? Unless more toilets are brought in soon, a whole lot of people are at grave risk of losing critical appendages, and I’m not talking about arms.

Speaking of which, that one-armed drummer, Rick “Thunder God” Allen, was, all by himself, worth the price of admission. His left arm was severed in a car crash on New Year’s Eve 1984. He found a way to keep playing, and the band got even more popular.

In 2015, his severed arm was displayed at the Rock’n’Roll Hall of Fame in Cleveland. It’s a damn shame that the whole band hasn’t been inducted. Any group who has sold as many records as DL — more than 100 million — should be there. My opinion.

My larger point is that if Rick Allen can have such a positive attitude, so can all you amphithe-haters. I get it. If anyone honest had made a list of the 25 things Central New York needed most, an outdoor amphitheater miles from the nearest bars, restaurants and stores wouldn’t have even made the cut. But here’s the reality: We have a new white elephant to bookend our ballpark, so let’s enjoy it.

To paraphrase another rock band from England: In Syracuse we can’t always get what we want. But if we try sometimes, well, we just might find a safe place to pee.

Proactive for Peace
Sticker Shock In Armory Square
To Top