It’s something we’re not supposed to say out loud but, even worse, should not be put in print: Most university drama departments are oversupplied with female talent.

Yes, there are plenty of conspicuously gifted guys, as last month’s Syracuse University Drama Department production of Parade demonstrated. But the women, ah, so many. And not just leading ladies, but character actresses: edgy, quirky, earthy and salty. Some spend four years in town, and we never see them on stage.

Richard Harris’ 1985 British dance comedy Stepping Out boasts nine roles for women and one for a man, and they all have lots of work to do. All players must speak in grotty North London accents, look to be twice their ages, be funny, dance like stumblebums, and (spoiler alert) also be able to dance proficiently.

Stepping Out is often pegged as a working-class take on A Chorus Line. True, we see eight dancers and a piano player and learn of the conflicts between them, but in the fast-moving two hours and 20 minutes, none of them gets a substantial confessional scene. Scott Holdredge’s scenic design evokes a grimy church hall in unfashionable North London, where unheeded 19th-century religious art is still visible. 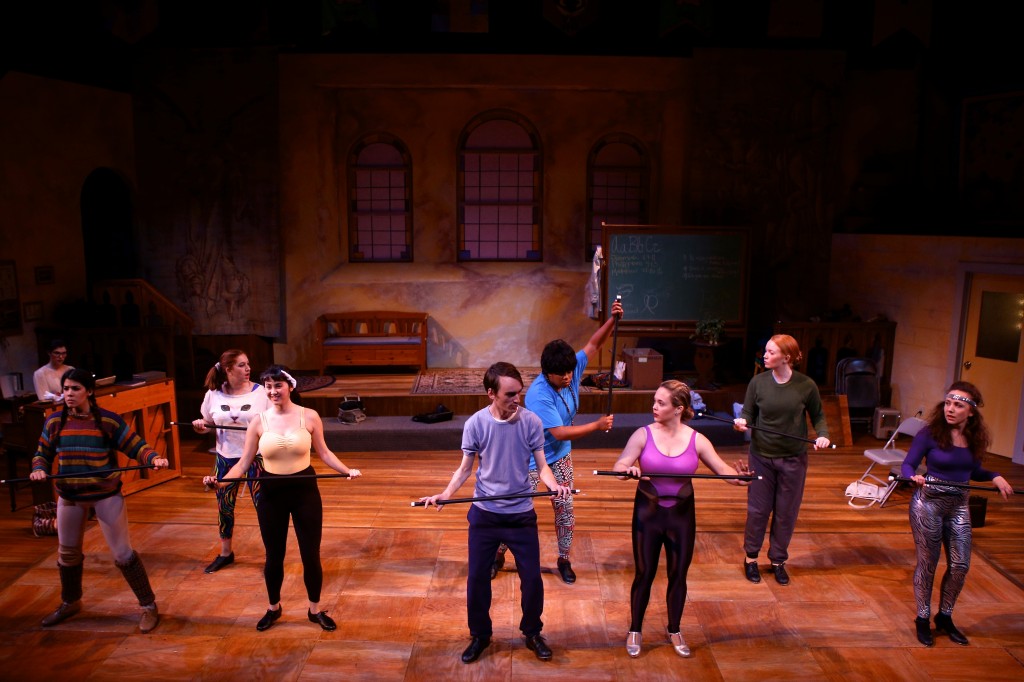 Unlike A Chorus Line, the students assembled by over-the-hill hoofer Mavis (Madie Polyak) are not sleek professionals but rather pretty unpromising misfits without noticeable gifts. In this British show in love with vintage American pop music, the real American dramatic model lies in the works of Sylvester Stallone. Stepping Out is Rocky in tap shoes.

This is a dance show where characterization is often defined by movement. We quickly discern cool and often distant Mavis; her grumpy, unappreciated pianist Mrs. Fraser (Anna Mintzer); and the sole guy, lanky, inarticulate Geoffrey (Tim Simon). Yet the others need markers to help us keep them straight.

At her entrance, pigtailed Dorothy (Amanda Rojas), a government employment office bureaucrat, flies across the room barely touching the floor. In contrast, shy housewife Andy (Lindsey Maria Elizabeth Newton) sulks around the back of the dance floor, trying to avoid glances. Caring nurse Lynne (Sarah Mozeson) thinks Andy might be the victim of an abusive husband. When some members of the cast speak in such heavy accents that we lose a few words, we can still follow the action. Mime and body set carry us through.

Harris’ script thrusts four dancers into a little extra time in the spotlight. Rose (Georgina Morilla) is a Jamaican immigrant who really dances to a different drummer. Morilla, a native of Spanish-speaking Dominican Republic, does not speak with a London accent and never lets a gag get by her.

Even harder for Mavis to tame is the gum-chewing street tough Sylvia (Jesse Roth), a lineal descendant of Rizzo in Grease. It may be the lines, or more likely the excellence of her accent and projection, but Roth hits the top of Stepping Out’s Laff-o-Meter.

Two more characters follow slightly longer arcs. Sharp-voiced Maxine (Carol Foose) brings concerns that Mavis has to hear. But even more tension is generated by self-obsessed Vera (Natalie Paige Goldberg), who rubs everyone the wrong way, both carelessly and directly.

In Stepping Out’s most arresting visual moment, Vera dons a form-hugging silver lame body suit, contrived for her to dominate the chorus line. She’s talkative, constantly revealing contradictions, like why she has such a crummy day job. Eventually she lets loose the Big Secret about her home, the kind of squalid sins that compare with Greek tragedy. Actress Goldberg plays this well by having Vera feign indifference to what the others find shocking.

Moving toward the end, art resolves all conflicts. Stepping Out’s performances are amusing. The clumsiness is endearing rather than excruciating, especially when done with funny hats. Choreographer Christy Soeder appears to have been nearly a co-director with Timothy Davis-Reed. As several players initially don’t look like dancers, Soeder may have been pulling off a life-imitates-art routine preparing the cast for the final curtain.

Nikole Moreno’s period costumes are each individualizing and evocative. Then again, costume changes come about every five minutes, with new leg warmers (hey, it’s the 1980s), shoes, boots and tops coming and going. The backstage crew deserves its own bow.