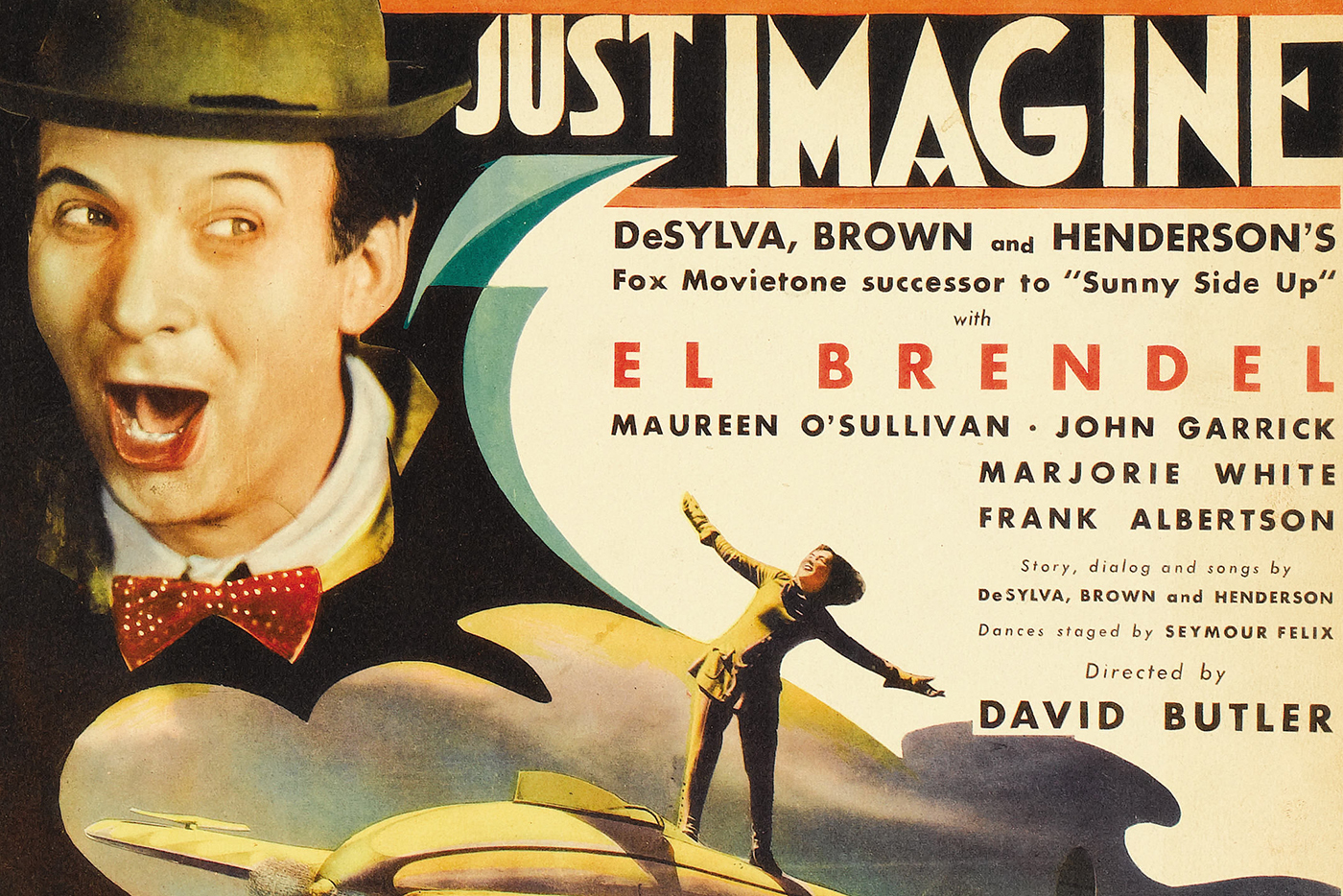 A quintet of rarely seen features will salute the salad days of classic film star Gary Cooper during this weekend’s 14th annual Capitolfest, the summertime tribute to screen gems from the silent and early sound eras. The movie blowout at Rome’s Capitol Theatre, 220 W. Dominick St., offers 14 features and plenty of short subjects, most presented in archival 35mm prints. 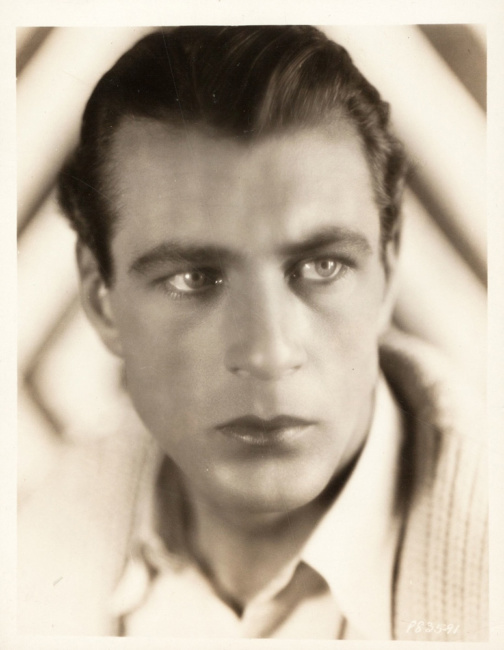 Also back for an encore will be a dealers’ room, located at an adjacent storefront, that will feature collectible items, stills, videos and other bric-a-brac. Hours will be Thursday, 6 to 9 p.m.; Friday and Saturday, 9 a.m. to 7 p.m.; and Sunday, 9 a.m. to 3 p.m.

The 1,700-seat Capitol, which opened Dec. 10, 1928, features 1950s-era carbon-arc, variable-speed film projectors that will handle the weekend’s diversions, along with a three-manual, 10-rank Moller pipe organ to provide the silents with musical accompaniment.

Next at 3:15 p.m. is Library of Congress film expert George Willeman’s presentation on the Edison Kinetoscope, including early sound-movie experiments dating back to 1913. Wrapping the afternoon is Dude Ranch (3:55 p.m.), which pairs Jack Oakie and Stuart Erwin in a frantic 1931 Paramount Western comedy. The silents will be accompanied by organist Dr. Philip C. Carli.

Friday’s evening program, 6:50 to 10:30 p.m., begins with Cooper’s first starring role in Arizona Bound, a 1927 silent Western from Paramount. Alas, only about two minutes survive from this otherwise lost film in this Library of Congress presentation. Next is Lightnin’ Wins, a silent short from 1926, which earned Cooper a $50 paycheck for two days’ work for this unpretentious two-reeler. And Cooper stars with Clara Bow and Esther Ralston for the 1927 Paramount drama Children of Divorce (7:10 p.m.). Avery Tunningley handles the keyboard honors for the silents.

The evening concludes with Capitolfest’s traditional screening of a film that is available on movie channels and home video, although 35mm archival showings are extremely rare around Central New York. The million-dollar production Just Imagine (8:40 p.m.), from 20th Century Fox circa 1930, is perhaps the strangest science-fiction musical comedy ever released, but this rare screening will surely delight fans of comic actor El Brendel. 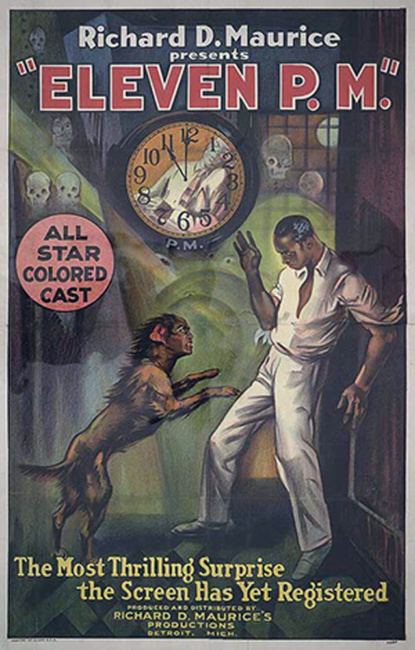 Saturday’s afternoon session, 2 to 5:45 p.m., kicks off with more video presentations of vintage Edison Kinetoscope efforts from 1913. They will be followed by a 2:20 p.m. presentation with David Pierce and James Layton, authors of The Dawn of Technicolor, featuring clips and photographs to illustrate the film process and its growing pains during the talkie era. Completing the program will be the 1936 Columbia color cartoon Merry Mannequins (4:05 p.m.) and the 1934 Universal feature comedy The Poor Rich headlining scene-stealers Edward Everett Horton, Edna May Oliver and Andy Devine, with Thelma Todd providing hubba-hubba eye candy.

The evening’s program, 7:40 to 11 p.m., offers a restoration of the 1913 Norma Talmadge silent short Under the Daisies, a two-reeler whose second reel was only rediscovered in the last year. The 1928 Fox silent Dressed to Kill (8 p.m.) presents Edmund Lowe and Mary Astor in an old-school crime drama. And Universal’s 1931 crime story Up for Murder (9:45 p.m.) features Lew Ayres, plus Frank McHugh’s sideline comic antics as a soused newshound. Bernie Anderson will provide the organ music throughout Saturday’s silent showings. 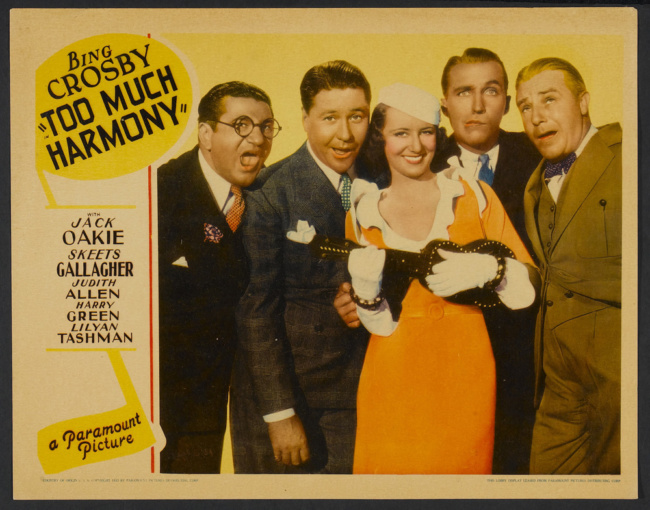 Theatrical poster for Too Much Harmony.

The morning segment on Sunday, Aug. 14, 9:30 a.m. to 12:50 p.m., commences with a true rarity: the 1929 short Me and the Boys, featuring vintage jazz stars Jack Teagarden, Benny Goodman and Jimmy McPartland. Long considered lost and never screened in American theaters, the film was rediscovered in 2012 inside an Australian museum. Paramount’s 1933 musical-comedy frolic Too Much Harmony (9:40 a.m.) provides fun and games with Bing Crosby, Jack Oakie and Skeets Gallagher. Rounding out the show is the 1920 Fox entry While New York Sleeps (11:25 a.m.), which spins three separate Manhattan melodramas and became one of the studio’s biggest moneymakers of the silent era.

Capitolfest 14’s three-day weekend pass fetches $60 for adults, $38 for children 12 and under, while a Friday-Saturday or Saturday-Sunday pass is $49 for elders, $27 for small fry. Single-day passes run $29 adults, $17 kids, while separate sessions are $16 adults, $10 children. The mint-condition prints hail from the Library of Congress, the UCLA Film and Television Archive, George Eastman House and the vaults of Universal Pictures (which owns most of Paramount’s sound movies from 1928 to 1948) and 20th Century Fox. For information, call 337-6453 or visit romecapitol.com.