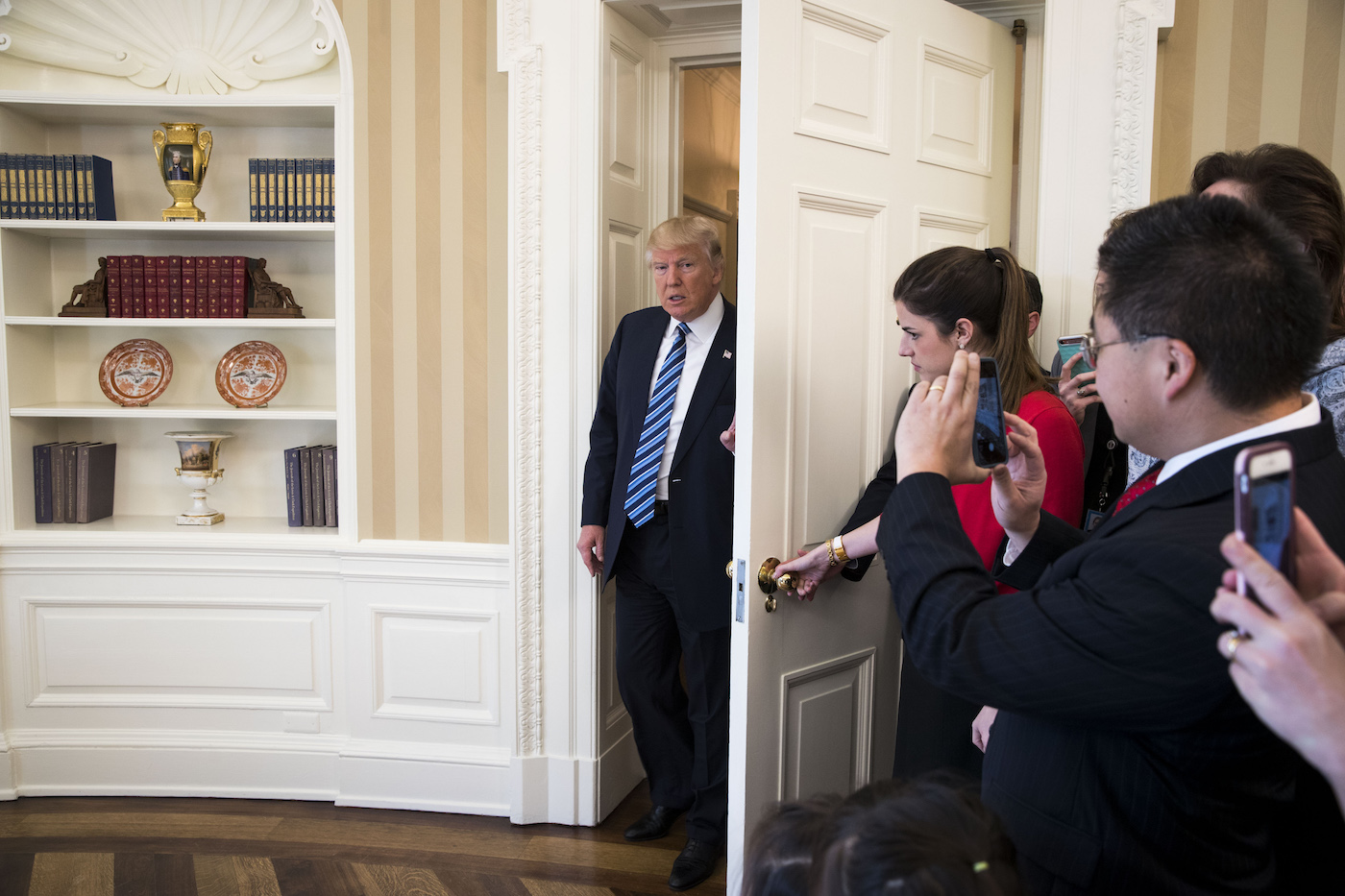 Trump is more keen on blaming others than taking responsibility.

President Donald Trump enters the Oval Office to attend the swearing-in of Jeff Sessions as Attorney General of the United States, at the White House in Washington, Feb. 9, 2017. Photo by Doug Mills of The New York Times
Share
Tweet
Share
Share
Email
Comments

There are many things that make a great leader great. They must be intelligent, strong and communicative. But perhaps most of all, they must understand they are responsible for the actions and decisions not only of themselves, but of all of those they lead. A good captain must always go down with his ship, we like to say.

There’s no difference when it comes to our presidents. We trust our chief executives to keep us safe, act responsibly and do all within their power to better the country we all love. And when things regarding our governmental operations don’t go right, as they do in every administration, they must know that it is them who ultimately must shoulder the burden. As the infamous sign on President Harry Truman’s desk read, “the buck stops here.”

It may very well be the most difficult duty that comes with holding the office. Since the days of Truman, we have seen many of our presidents live up to their most humbling moments during their term, some of them locking themselves into our memories for a lifetime.

John F. Kennedy took full responsibility for the failure of the Bay of Pigs invasion in 1961 — something he approved and then knew the ramifications of once its disaster became known to the nation. Ronald Reagan apologized (sort of) for the controversial Iran-Contra affair. After continuously denying it, Bill Clinton eventually came out regarding his White House affair with Monica Lewinsky. George W. Bush took responsibility for the failure of the government’s response to Hurricane Katrina. And while Hillary Clinton was often the target for blame regarding the Benghazi attacks, Barack Obama said “but she works for me. I’m the president and I am always responsible.”

We have yet to see any sign of such an attitude from President Donald Trump. During the campaign, he at one point said he regretted “some” of the things he had said, saying “sometimes, in the heat of debate and speaking on a multitude of issues, you don’t choose the right words or you say the wrong thing.” When the 2005 Access Hollywood tape came out showing the billionaire businessman making lewd comments about women, Trump did acknowledge that the comments “were wrong” and he said the words, “I apologize.” But he also finished that apology with using his comments to direct an attack at Bill Clinton.

OK, we get it. It’s no secret to anyone that Trump didn’t back down whenever he was scrutinized by any politician or member of the media during the campaign. But, as President Obama said to Sen. John McCain at a healthcare summit in 2010, “we’re not campaigning anymore. The election’s over.”

It’s not enough that doubling down and coming out swinging is simply Trump’s style of governing. He’s the one in the chair now. But when things don’t go his way, the president likes to blame somebody else or some other system instead of asking himself what he could’ve done better.

He continues to insist that he would’ve won the popular vote in the election if millions of votes weren’t cast illegally — something that neither he nor anyone else has produced credible evidence of. He blamed the protesters and Delta for the all of the chaos at the nation’s airports regarding refugees detained because of his executive travel ban. He regularly blames the press for just about everything — from undermining his inauguration crowd (which wasn’t the largest in history) to his feud with the CIA that he himself initiated.

A CNN report found that Trump apparently regrets hiring Sean Spicer as his press secretary, who has been regularly criticized by the media and mocked by Saturday Night Live. But Trump allegedly blames Chief of Staff Reince Priebus for insisting he was the one for the job. Trump has denied that report.

Now Trump is blaming the legal battles regarding his immigration order on a “so-called judge.” Most strikingly, he felt the need to send out a tweet saying “if something happens blame him and court system.”

Essentially, god forbid there is a terror attack on our soil under his watch, large or small, Trump is saying the judicial branch of government will be responsible, and he wants us to feel the same.

While that in itself is complicated, there are going to be bad things that happen under the Trump administration. He’s not going to be able to win every time. When these things happen, how will Trump react? Will he blame the media, the Democrats, protesters or Sean Spicer? Or will he go down with his ship, swallow his pride and use the opportunity to evaluate his decisions, the staff he surrounds himself with and say the words “I am responsible and I will do all I can to make sure this never happens again”?

History does not suggest the latter.

If the buck doesn’t stop at the desk of President Trump, where exactly does it stop?