Frosh Hosannah: If talented SU freshman Tyler Ennis is playing like this now, then the sky’s the limit

Syracuse University men’s basketball coach Jim Boeheim didn’t come right out and say it, but he kind of said it: Freshman point guard Tyler Ennis is in the same class as former SU freshmen standouts Carmelo Anthony and Gerry McNamara.

Around these parts, there’s no higher praise than that. Anthony, with the NBA’s New York Knicks, and McNamara, an Orange assistant coach, led Syracuse to the national championship as freshmen in 2003.

With the Orange trailing 52-51 and about two minutes left against Pitt, Ennis scored six consecutive points on two dazzling drives and a pair of free throws to give SU a 57-54 lead with 4.8 seconds remaining. Ennis’ heroics kept the No. 2 Orange undefeated at 18-0 and moved SU (5-0) ahead of the Panthers (4-1) in the Atlantic Coast Conference standings.

“He’s a mature player, you wouldn’t think he’s a freshman,” Pitt senior Lamar Patterson said of Ennis. “He showed that at the end of the game. He came up big and led them to the victory.”

One of Ennis’ many un-freshman-like attributes is that he remains calm in any situation. Against Pitt, the 6-foot-2 Ennis had a sub-par first half (two points, one assist, one turnover) and watched a 10-point Orange lead turn into a 3-point deficit late in the second half. But down the stretch, when it was needed the most, Ennis rose to the occasion.

“From the moment I started to work with him,” McNamara said, “I kind of got the feeling he was going to be a little bit different.” 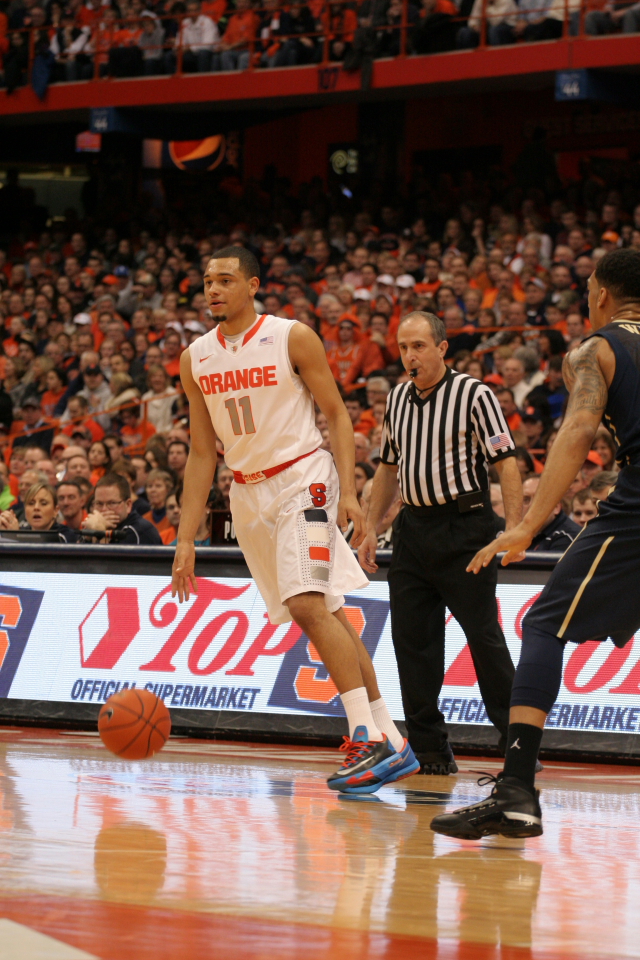 Neither of Ennis’ late-game drives was designed for him. The first play was set up for Trevor Cooney, but when Pitt’s defense gravitated toward SU’s best 3-point shooter, Ennis drove to the basket to give SU a 53-52 lead.

On the Orange’s next possession, SU center Rakeem Christmas set a screen past the foul line for Ennis, who had the choice of going left or right to find an open teammate. Talib Zanna, Pitt’s 6-foot-9 center, switched onto Ennis, and since Zanna was so far away from the basket Ennis decided to bolt past him and drive to the hoop for another layup.

“He saw an opportunity to attack a big guy,” McNamara said. “When you have a big guy elevated to 21, 22 feet {away from the basket}, it’s easier to beat him to the left than beat a guard to the right. He did a great job taking the right angle, a straight line drive to the basket, and using off hand to protect himself.”

After the Panthers sank a pair of free throws to slice SU’s lead to 55-54 with 4.8 seconds left, Pitt fouled Ennis on the inbounds pass and Ennis calmly sank the two free throws that iced the game.

“He made some of the best plays that I’ve seen in a long time,” said Boeheim, who’s been around for 38 years and 938 wins at Syracuse. “You don’t get to the basket against Pittsburgh, and he got to the basket for two layups and made his free throws. That’s unusual for any player. He won the game down the stretch for us.”

Ennis, who’s from Brampton, Ontario, played the entire game against Pitt and finished with three assists, one turnover and a team-high 16 points on 5-for-8 shooting from the floor and 5-of-6 from the foul line. For Pitt coach Jamie Dixon, Ennis’ performance was a reminder of the one that got away.

“We recruited him, and we’re well aware of him and know how good he is,” Dixon said. “He made the plays, he got to the foul line and made good decisions with the ball.”

For his part, Ennis didn’t seem to realize what all the fuss was about. After the game, Ennis said his drives to the basket were a “win-win” situation.

“I just have confidence in myself,” Ennis said. “It’s kind of a win-win, because I can get into the lane and as long as I can get it up on the rim I know Rock {Christmas} and Jerami {Grant} and C.J. {Fair} are crashing the boards. I just have to make a play and I know those guys have my back.”

While Fair is SU’s best all-around player, Grant the most dynamic and Cooney the team’s best shooter, one could make the argument that Ennis has so far been the Orange’s most valuable player.

He’s among the national leaders in assist-to-turnover ratio (99-to-24) and steals (48), and he ranks third on the team in scoring at 11.9 points per game. But beyond the numbers is that uncanny ability to know when to speed it up, when to slow it down and where to go with the ball.

“He doesn’t make freshman mistakes. Actually, he doesn’t make many mistakes at all, for that matter,” Fair said. “His play has been a huge plus for us this season.”

“He stopped being a freshman,” Fair added, “after his first game.”

McNamara said Ennis reads the game as well as anyone he’s ever seen. He said Ennis gets a better feel as the game progresses, which helps explain what happened at the end against Pitt.

“I think it’s a combination of being athletic and thinking the game and knowing what the defense is going to do and just pretty much making reads when you have to and making the right reads,” Ennis said when asked about his ability to slow the game down in pressure situations.

Ennis does all of the right things off the court, too. When asked about the comparison to Carmelo and GMac, Ennis thanked his coach and credited his teammates.

“It’s an honor, especially coming from coach,” Ennis said. “It’s really just the perfect situation. I have a lot of teammates who have a lot of confidence and can make plays, and they make me look really good.”

The Orange is off this week and will travel to Coral Gables, Fla., for an ACC rematch against the University of Miami at 1 p.m. Saturday, Jan. 25. (The game will be televised by CBS.) The Orange outlasted the Hurricanes 49-44 on Jan. 4 at the Dome. SU is 18-0 for the third time in four seasons and two wins shy of tying the 2011-2012 team’s record of 20 consecutive wins to start the season.