Three days after dancing with Bruce Springsteen onstage in front of tens of thousands, Fayetteville-Manlius senior Kait Franey was still wearing a paper bracelet with the number 1032 on it. The 18-year-old went to see the E Street Band at Albany’s Times Union Center on Tuesday, May 13, never imagining that she would be plucked out of the crowd to share the stage with the man who has been her favorite musician ever since seventh grade.

A veteran of two previous Bruce performances, Franey thought she knew what to expect when she arrived in Albany in late afternoon along with her friend, Anna Putelo, and Putelo’s parents. The Putelos, like the Franeys, are long time members of the E Street nation. Franey remembers as a child being dropped off at her grandmother’s house while her parents went to Bruce concerts. Grandma would play Springsteen tunes, and the young Franey came to know the Springsteen catalog from “Thunder Road” to the “Rising.”

She arrived at the arena gate in downtown Albany by 5 PM, just as crews started to distribute the lottery bracelets that gave them a shot at entrance to the pit. Her number was called, and before the 7:30 sound check she found herself up front so close she could touch the stage.

“One guy there, whose name was Art, said he had been to 109 Bruce concerts,” she recalls. “He looks at me and says – ‘he’s going to pick you.’” Sure enough, just after finishing the title song from his new album, “High Hopes,” Springsteen launched into a cover of the Traits “Treat Her Right” and walked over, bent down from the stage, took her by the hand and started singing to her.

“People were saying, get up on stage. He went away, then came back, and I just got pushed on to the stage.”

“I’m standing there in front of thousands of people next to Bruce Springsteen, listening to my idol. I start dancing. He’s playing the guitar, and I’m going nuts. Then at the end he bowed to me, and I bowed to him, and he gave me a hug. Then we bowed together, and I did a curtsy. That was awesome. I was so giddy the entire time. Beside myself the entire time. I didn’t even know what was happening. He didn’t say anything – he just kept laughing at me.”

When the song over, the Boss asked the crowd a question.  “The song has magic in it, doesn’t it?” Kait Franey would certainly agree. 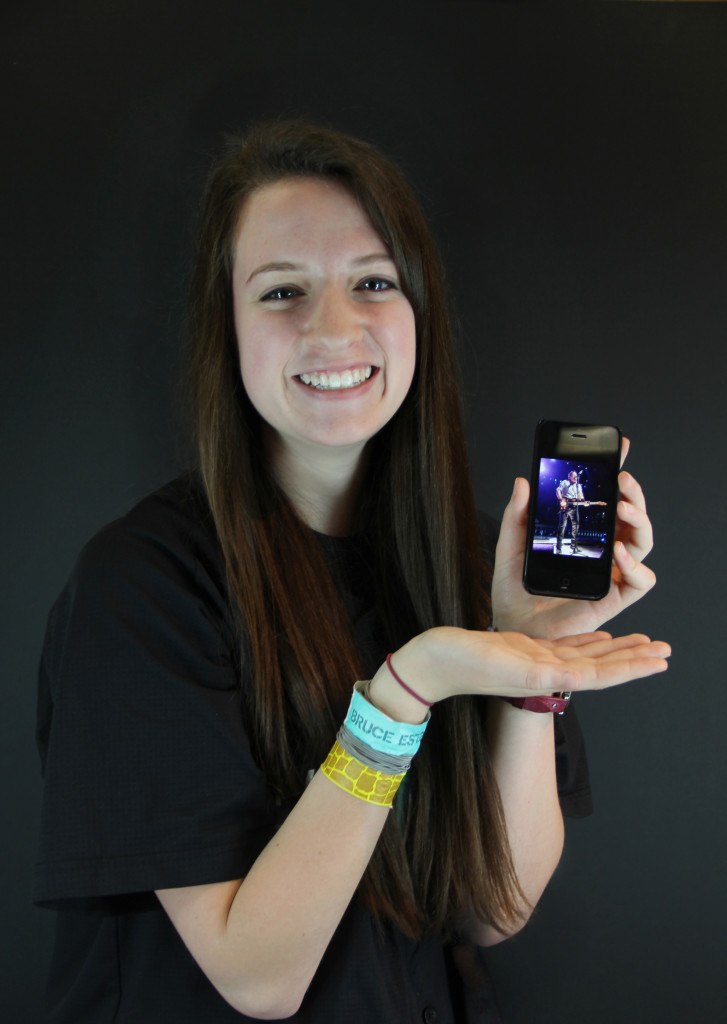 Kait Franey holds her memorable night with Bruce Springsteen on her smartphone.
Photo by Rebecca Arthur

The next day she went back to school, where her teachers had more understanding of the moment’s import than did most of her classmates. (Her third year English teacher had been at the show and seen her up on stage.) “I told them I might not be able to focus on what I was doing at school,” says Franey. That is not usually the case for her. She’s been an honor student all through high school, collecting two national Scholastic Arts Awards along the way while playing shooting guard on the basketball team all four years.

After pulling out of Albany, the Springsteen High Hopes tour wound up with two dates in Connecticut. Fans will have to wait through the summer to find out when they can see the Boss live again. As for Franey, she’s headed to Marist College in Poughkeepsie, where she plans to major in communications and take a minor in Art.

The bracelet is going with her, along with the memory of a lifetime.

Mike Zito Reinvents The Wheel
Lost and Found
To Top