How 13 abused horses were saved and restored to health

When Marion Secor learned that a herd of abandoned and maltreated horses needed a place to recuperate, she didn’t hesitate. Yes, of course, she told CNY SPCA officials, bring them to Skanda. The Cazenovia horse farm’s mantra is “for the love of the horse,” and this mission offered a chance for the new business to put its slogan into action.

“We didn’t know what we were getting into,” said Secor, who launched Skanda in August 2012. “We had never rescued before, but we couldn’t say no. We just knew we had to take them. If you love horses, how could you say no?”

Over two days in late February 2013, rescuers with the SPCA rounded up 14 horses from a field in the town of Onondaga. On the first day, they managed to corral nine horses, get them in trailers and deliver them to Skanda Equine. A few days later, SPCA workers transported another five horses.

The rescue wasn’t easy. The horses were not used to being around people, and many had likely never been trailered before. They were skittish and resisted capture. One horse knocked workers over. At least one was sedated before rescuers could move her.

At Skanda Equine, a 70-acre farm just off Route 20 in Cazenovia, it was all hands on deck. When the seven stallions and seven mares arrived, Secor and her colleagues put them in a separate barn to quarantine them. The horses were wary, at first. Some kicked and bucked when touched, and there were a few minor injuries to staff early on. 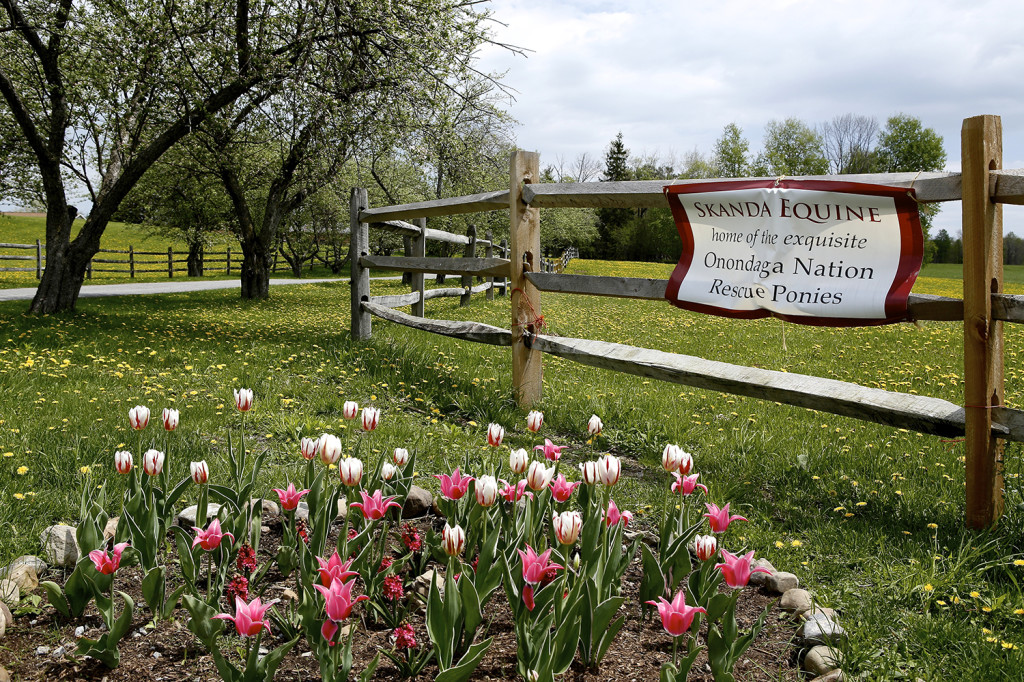 They arrived emaciated and weak. Some were 200 or more pounds underweight. Some couldn’t stand. Their hair was matted and dirty. They apparently had little human contact and resisted being touched. But soon the horses — thought to be a mix of Appaloosa and Mustang — relaxed, responding to gentle touches, regular care and limitless love.

“When they were moved into the barn, it was the first time they had regular food and water and consistent care,” said Piama Gilbert, a Skanda staff member who has worked with horses most of her life. “It became a haven. They came to love that barn.”

Five months after the rescue, Skanda staff were still shaking their heads when they talked about the horses’ condition when they arrived. But by July, the horses were grazing alone or in small groups. They gently stuck their heads out to greet visitors and seemed to be mugging for the camera. 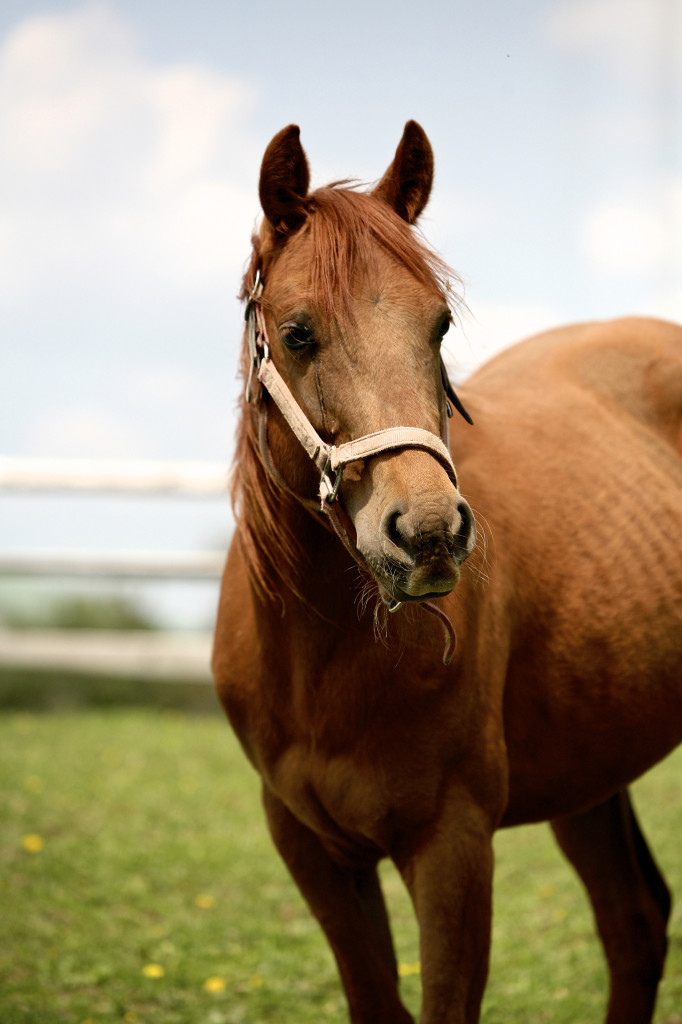 Secor named the horses, most of the choices reflecting her Scandinavian heritage. There’s Magnus and Ander and Brigid. Ari, Scout, and Mac. Mira, Sindri, Neiboust, Skye, Alexsia and Molly. Tibet was named after Secor’s daughter, who is from Tibet. And then there was Little Moe, who broke their hearts from Day One. His real name is Modig, which means brave in Norwegian.

Moe, a yearling, could not stand. It took six people to get him upright. He was emaciated, and Gilbert and Secor think a corneal tear left him blind. He couldn’t walk or eat. Staff and volunteers watched over him around the clock. He rested on straw and soft blankets. They fed him water by hand, and he ate whenever he was awake.

“Instantly, he trusted us,” Gilbert said. “He allowed us to lift his head and support him. He’d hear our voices and his mouth would move, because he knew he was going to eat. It was like having a wild deer. He was very brave.”

“It was heart-breaking,” Secor said. “I don’t think there was a dry eye around here for a while.”

Skanda held a memorial service and planted a cherry tree in Moe’s memory. The staff still tear up talking about him.

But they didn’t have time to mourn. The surviving horses required hours of care each day. They needed to be groomed — gingerly at first, because they weren’t used to it. They had to be fed carefully and slowly to avoid making them sick. They needed to learn to socialize and interact with humans.

Skanda quickly separated the mares and stallions, but four of the mares were pregnant when they arrived. One lost its foal. By May 2013, Miri and Sindri had fillies named Chance and Sparkle. On July 24, Aleksia had a colt, which Secor named Rio. Two days after Rio’s birth, Aleksia stood guard over her foal, hovering as he stood on wobbly, thin legs, standing patiently as he nursed.

Each horse possesses a distinct personality, the Skanda staff says. Ari, is “light and airy and very soft.” Gilbert compared him to a unicorn: “He has that mystical sweetness.” Neiboust, a bay mare, came close to dying. She was so weak at first that workers had to hoist her to a standing position using a fire hose. But now she’s “very mature and dignified.” Magnus has “a strong, muscular presence” but is very kind and gentle. Molly has unusual coloring: a mixture of copper, gray and blue. Gilbert calls her highly intelligent, sweet and loving, but a little mischievous.

For about a month in spring 2013, Hannah Friedman, a senior studying equine business management at nearby Cazenovia College, interned at Skanda. She spent long days with the rescued horses, brushing, touching, standing and walking with them so they would get used to human contact. Sindri, the tiny roan mare, found a special place in Friedman’s heart. 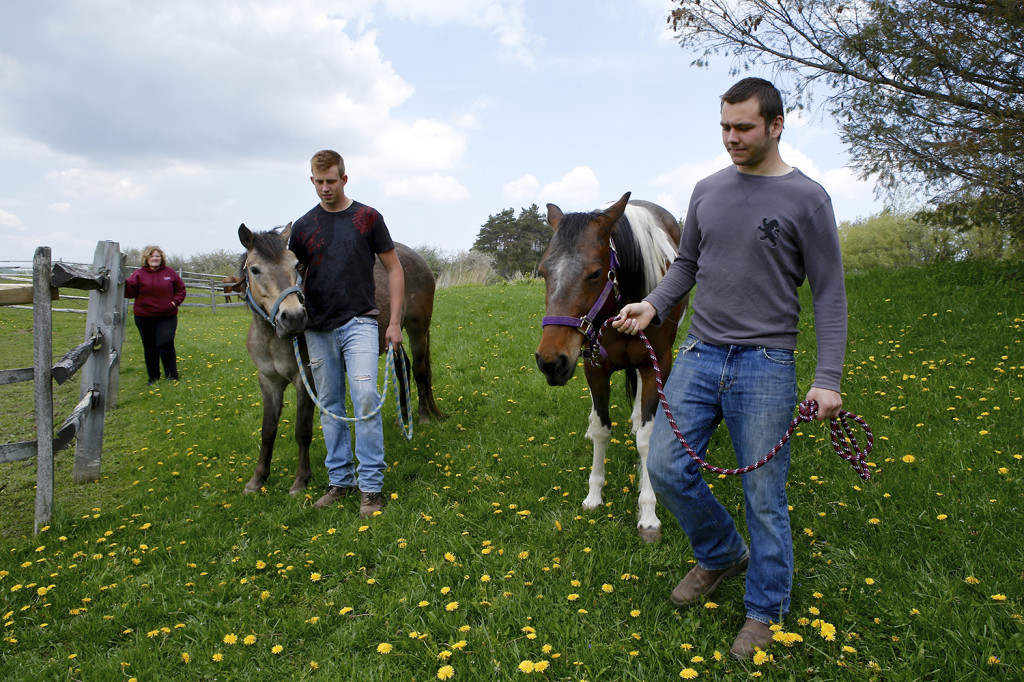 “She didn’t like to have anyone touch her,” Friedman said. “We had to chase her and hold her.” It took a few weeks to build trust. “She had a tendency to turn her back to me when she was not happy and try to kick me. I would just step away and give her space. I would sit down with her in her little pen and put her hay close to her. She would run away but eventually come closer to the hay.”

Friedman graduated in May 2013 and took a job teaching beginners how to ride in Washington, N.J. Watching the horses gain strength and build trust with humans made a big impression on her.
“It was one of the greatest experiences of my life, and I hope to get a chance to work with wild horses again,” she said.

Five months after their rescue, the horses were much improved. Paul Morgan, executive director of the CNY SPCA, was surprised all but one had survived, let alone thrived.
“Now they’re back up to weight,” Morgan said. “We had a lot of compassionate people that did wonders.” 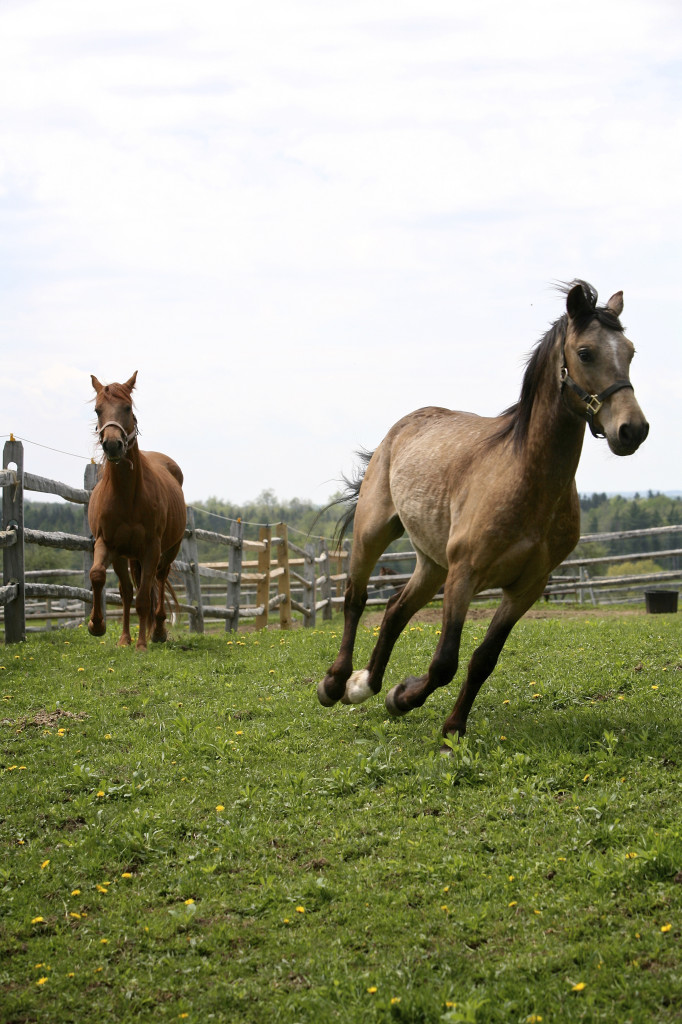 With their health restored, Skanda began to train the horses for riding and their future lives: All will be put up for adoption. In late July 2013, a farrier treated nearly all the horses, trimming their feet and treating abscesses. Skanda does not shoe its horses; that will be up to the adoptees’ owners. The stallions will be gelded before adoption.

“They’re so much better,” Gilbert said. “They’re incredibly smart. They’re intelligent. Their hearts are so full because they’ve been unencumbered and had to survive. They’re motivated primarily by love and generosity. They live in the moment. They’re just who they are.”

Secor shrugs off questions about who’s responsible for the terrible conditions in which the horses were found. “My priority is the horses,” she said. Nor will she estimate the cost of boarding, feeding and treating the horses, although the SPCA’s Morgan suggests costs of at least $130,000 through last summer. It’s not clear who owned the horses, and no one has been charged in the case, but Morgan said the Onondaga Nation, which has owned the property since 1999, cooperated with the rescue and donated nearly $100,000 to the SPCA to help pay for the horses’ recovery.

Secor said it would be nearly impossible to track the many hours staff and volunteers spent with the horses. They were wormed several times. The sick horses were fed special — and more expensive — alfalfa. They also needed halters and leads. An event Sept. 14 — the Little Moe 5K Walk/Run — raised money for horse rescue at the CNY SPCA.’

While it’s easy to marvel at the love and attention Skanda gave the horses, the staff said they learned plenty in return: lessons in trust, bravery, patience and internal strength. For co-owner Tom D’Aquanni there’s this: “I’m learning to be more still, more quiet, to listen to subtle things. It’s amazing how much they see and perceive. I’m learning to slow down and pay attention.” 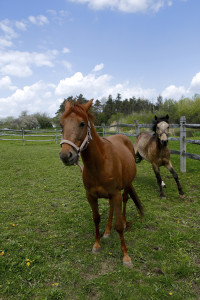 Although most of the horses are ready for their next home, Skanda staff worries about the new owners.

“The horses really have to trust them,” Secor said. “We have to know the next home will be safe. If we took them in to keep them and just send them out, what have we accomplished? We want to do it in a way that honors them.”

She doesn’t have a list of criteria for the new owners, but the priority is that they love horses. “We want someone who has a connection with the horse,” she said. “If the connection is not there, it’s not. I’ll know.”

So far seven of the horses have been adopted. Secor adopted Ander, who she had her eye on from the beginning. Another 11 are available for adoption. The staff will be sad to see the horses leave, but are pleased they have regained their health and spirit. 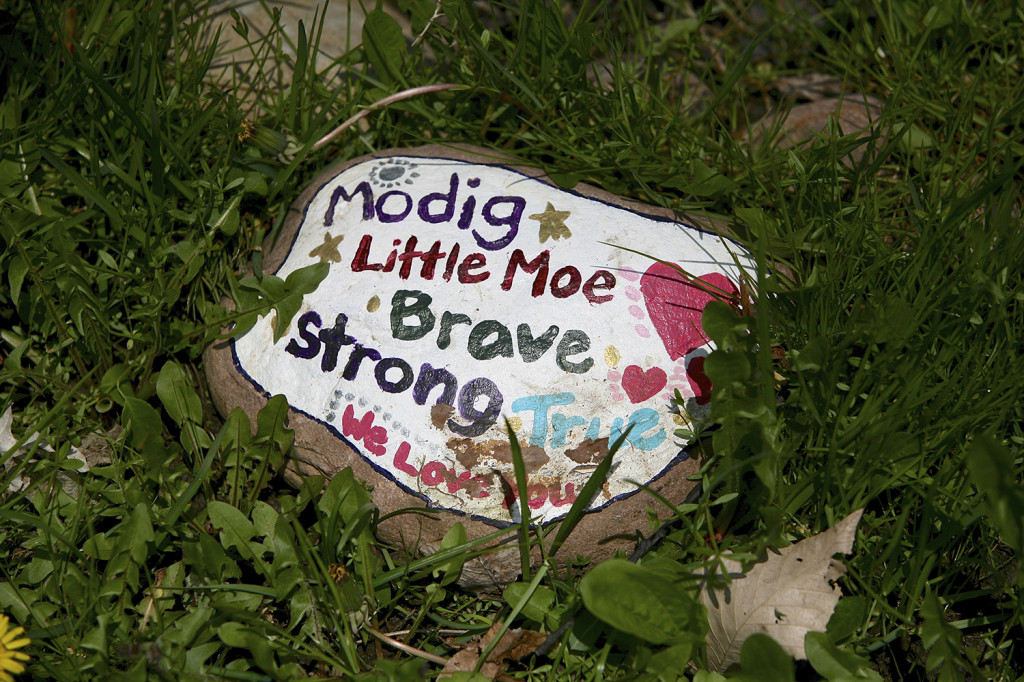 Sharing the Stage with Springsteen
News and Blues
To Top