Defying the advertising truism that “Sex Sells,” Shakespeare’s dark comedy Measure for Measure is not performed very often. Yes, sex not love, as in a working brothel, its statuesque madam, her rascally pimp and a hypocritical Puritan brought low by his unbridled lust.

For Syracuse University Drama Department’s consistently inventive production, director Celia Madeoy, a Shakespeare specialist, has moved it upstairs from the Storch Theater into the Loft, a smaller black-box venue. Action is up-close and personal, and the scantily clad Brothel Girls are almost in your lap. Only a limited number of laps will be let in. 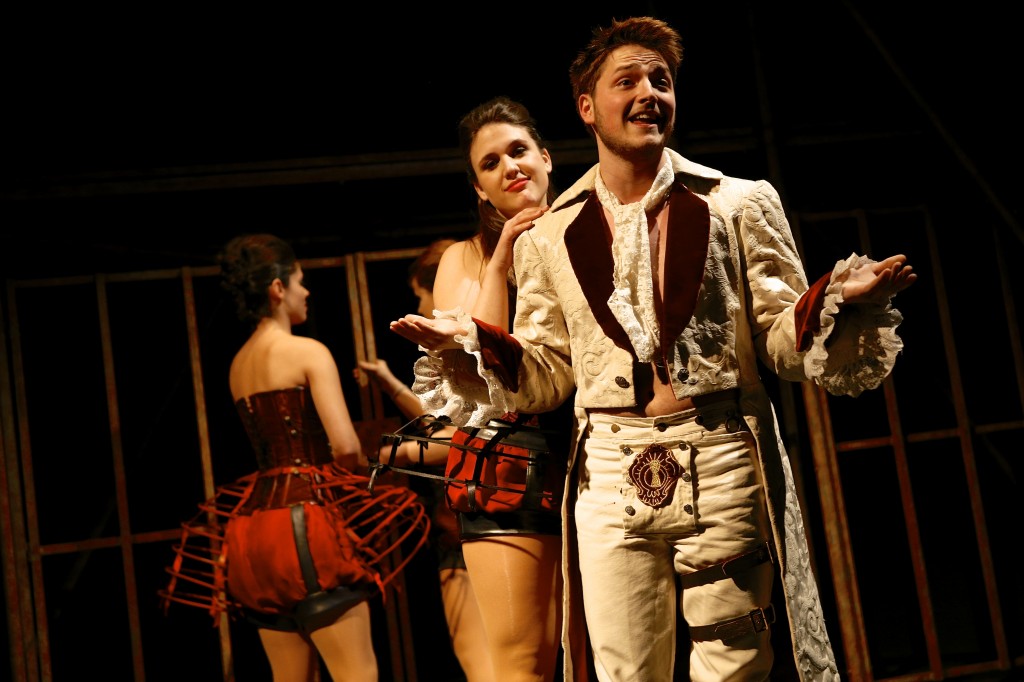 Maria Marrero’s set divides the tight set diagonally with a grill that be might the bars of a prison or the wall of a court. Some of the action scoots up staircases or jumps to the balcony. You have to move around in your chair to keep up with it.

Measure for Measure takes place in Vienna, of which Shakespeare knew little, even though most characters have Italian names. The benign Duke Vincentio (Daniel Chavarriaga) takes leave of the city, perhaps because he is unwilling to enforce the widely flouted laws against unchastity. He hands over authority to Angelo (Ezekial Edmonds), a strict, unsmiling judge with a whitewall haircut.

In resetting the action in the actual Vienna of the late 19th century, director Madeoy explains that the play’s Duke might be identified with the Austrian reforming Crown Prince Rudolf. Theater buffs are more likely to link that era with the works of playwright Arthur Schnitzler, such as La Ronde or Eyes Wide Shut. With everyone clad in Simon Brett’s sumptuous costumes (even the nuns are chic), this Measure for Measure certainly looks like a Schnitzler, and with the rife cynicism and betrayal it could be Schnitzler, except for the somewhat happy endings. 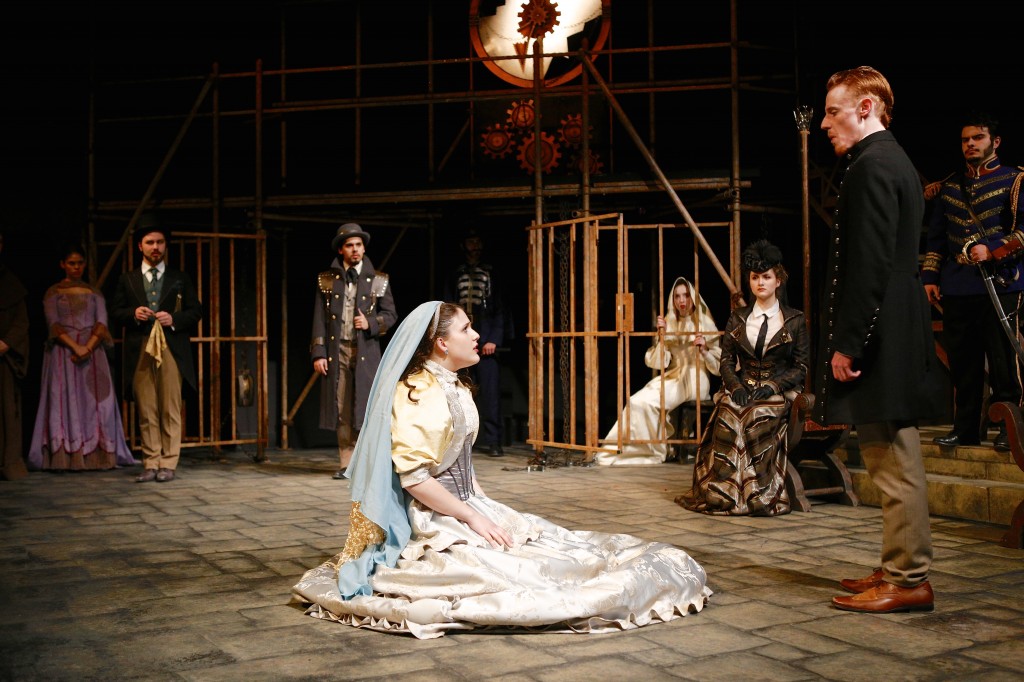 We could not have much drama without people misbehaving, but in Measure for Measure, both the falsely good and the people we are rooting for stoop to turpitude. Consider what happens when Isabella, the sister of the imprisoned Claudio and a white-robed novice in a convent, tries to make a case with Angelo for her brother. He is quick to come up with a price for Claudio’s release: her virginity, on the floor, right now. Like many contemporary victims of sexual harassment, Isabella fears that Angelo’s status and reputation for moral probity mean that her story will never be believed.

Reaction, however, is worse than that. When Claudio hears the news he wants Isabella to pay the price if it means that he lives.

Although Isabella is not one of the most celebrated Shakespeare heroines, she deserves to be. Resourcefully, she remembers that Angelo was betrothed to the lovely Mariana (Olivia Hayhurst), but dropped her when her dowry was not at hand. Still smitten with Angelo for some reason, Mariana willingly becomes part of Isabella’s plan to give Angelo the sex he wants. As Isabella, Lydia Stinson’s ease with Shakespeare’s diction makes her character especially compelling.

As would have been done in Shakespeare’s time, actors double up in supporting roles, some of them seemingly written for scene-stealers. Among the strongest is Luke Brau as loquacious Pompey Bum the pimp, followed later as the pious, contained Friar Thomas. A reporter of action rather than its initiator, Pompey tells Mistress Overdone (O Candide-Johnson) that Angelo wants to close down all the city brothels. Brau generates real laughter from Pompey, rivaled by Tom Hayes as the glib and morally ambiguous Lucio.

Also amusing is Alan Ghavami’s Dogberry-like constable Elbow, given to some of the most outrageous puns. Despite Elbow’s footbrace, Ghavami is unrecognizable as the crazed prisoner Bernardine.

Musical interludes give snippets of klezmer, the blues and Appalachia, as well as a dance number at the final curtain. Measure for Measure is often called a “problem play” because it’s hard to classify. Director Celia Madeoy has ironed out those problems.