Although set chronologically in the middle of the trio of Neil Simon’s “BB” autobiographical plays, Broadway Bound was written and produced last. The playwright tells us why in the first scene: dirty laundry.

Even before we learn how the Jerome brothers are going to leap to their first giddy success in show business, we have Trotskyite Grandpa Ben (Kim L. Hubbard) cringing in shame that he has soiled his nightclothes. His secrets are by no means the most painful. While the theme of Making It might be the driving force in thousands of American stories, Simon wants us to know, in the subtlest and most ironic of all his works, that it comes with an unexpected price.

Tim Brown’s set for the Redhouse Arts Center’s mounting of Broadway Bound offers a cramped, lower-middle-class apartment in the southern reaches of Brooklyn. The kitchen and living room are before us and the bedrooms of the two sons are seen simultaneously above. People shout back and forth and slam doors more loudly, but that does not mean it’s in any sense a farce. 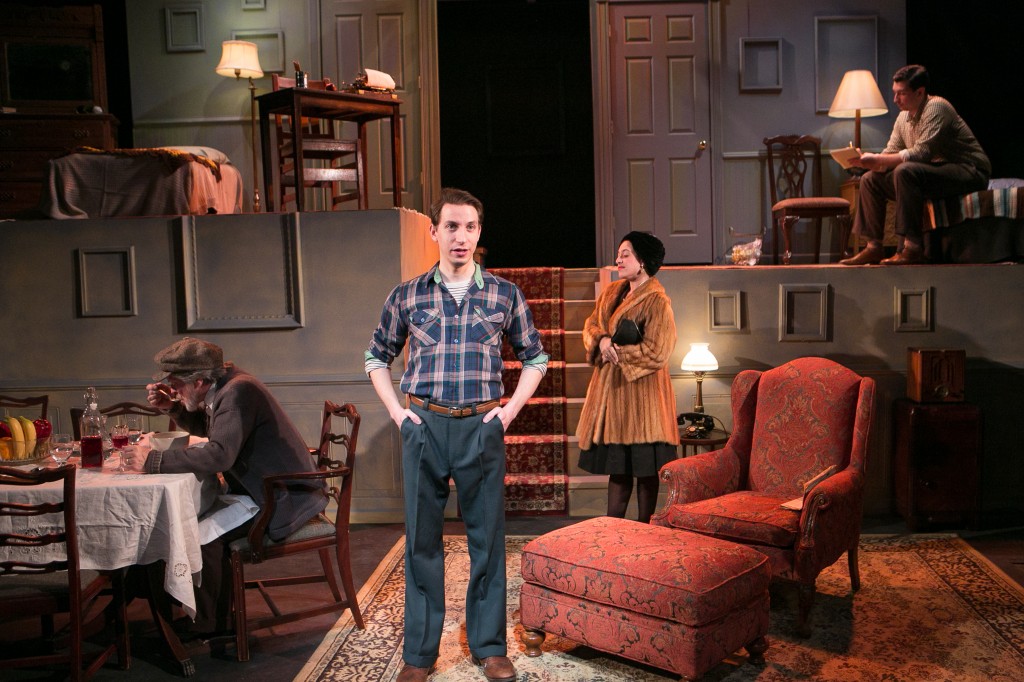 The relationship between Stanley and Eugene has changed since Simon’s Brighton Beach Memoirs, set before World War II. Before Stan was confident and worldly-wise, but now he is brash and driven. He recognizes that Eugene has the gift, but he still praises himself as a good editor with the keen eye of a talent agent.

The family member most conspicuously changed since Brighton Beach is Aunt Blanche (Sharon Sorkin), previously seen as a dependent border. She now lives on Park Avenue, arrives in a chauffeur-driven Cadillac and wears a mink. Grandpa Ben’s socialist ravings against her initially come off as comic, yet in Sorkin’s wonderfully nuanced performance, Blanche is not simply a riches-don’t-bring-happiness cliché but a lonely woman cut off from the people she loves.

Simon’s treatment of the Jerome parents, Kate (Laura Austin) and Jack (John Bixler), does not become apparent until the boys come up with their comic skit for network television. It’s as if Simon had heeded carping critics who said that too many of his characters, even the immortal Felix and Oscar, were facile and superficial.

In portraying fictionalized portraits of his own parents at a moment of crisis that he and his brother have provoked, the playwright takes risks for audiences expecting to see a light comedy. When the bright TV lights are on the boys, they tease out the unspoken and the taboo. It might pass as innocent patter elsewhere, but in the Jerome apartment it’s a lightning bolt.

This leads to two of the most interesting scenes Simon ever wrote. In one, strident Stanley confronts his father about his fleeting infidelity. It’s not shocking in itself; we’ve seen that the marriage has been loveless. Yet when Jack defends his inamorata, who is dying, as “decent,” Stan explodes. As director Stephen Svoboda stages it, our emotions are ready to go in either direction.

The more ambitious writing deals with Eugene’s recognition of his mother Kate’s deeper self. Earlier she was an uncomprehending nag and kitchen drudge. When she remembers one moment of youthful glamour with George Raft, then a star ballroom dancer, Eugene retraces the steps, holding his mother in his arms. Svoboda underplays this scene, cutting it short and never rolling up the rug.

Unusual in this production, the more experienced Equity players are in supporting roles while non-professionals play the lead brothers. Anthony Malchar apprenticed in seven roles at the Redhouse before giving us his deeply-felt Eugene. As the less sympathetic Stan, Matthew Krob can get laughs even as a straight man setting up for Eugene. A second welcome debut is Kim L. Hubbard, long a favorite at Cortland Repertory, who gets ultra-spark from Grandpa Ben. As the parents, company regulars John Bixler (with a hint of decency under the defensiveness) and Laura Austin (as the princess under the apron) are perfectly cast.
The Redhouse’s Broadway Bound concludes with performances on Wednesday, March 25, and Thursday, March 26, 7:30 p.m.; Friday, March 27, 8 p.m.; and Saturday, March 28, 2 and 8 p.m. Call 362-2785 for details.