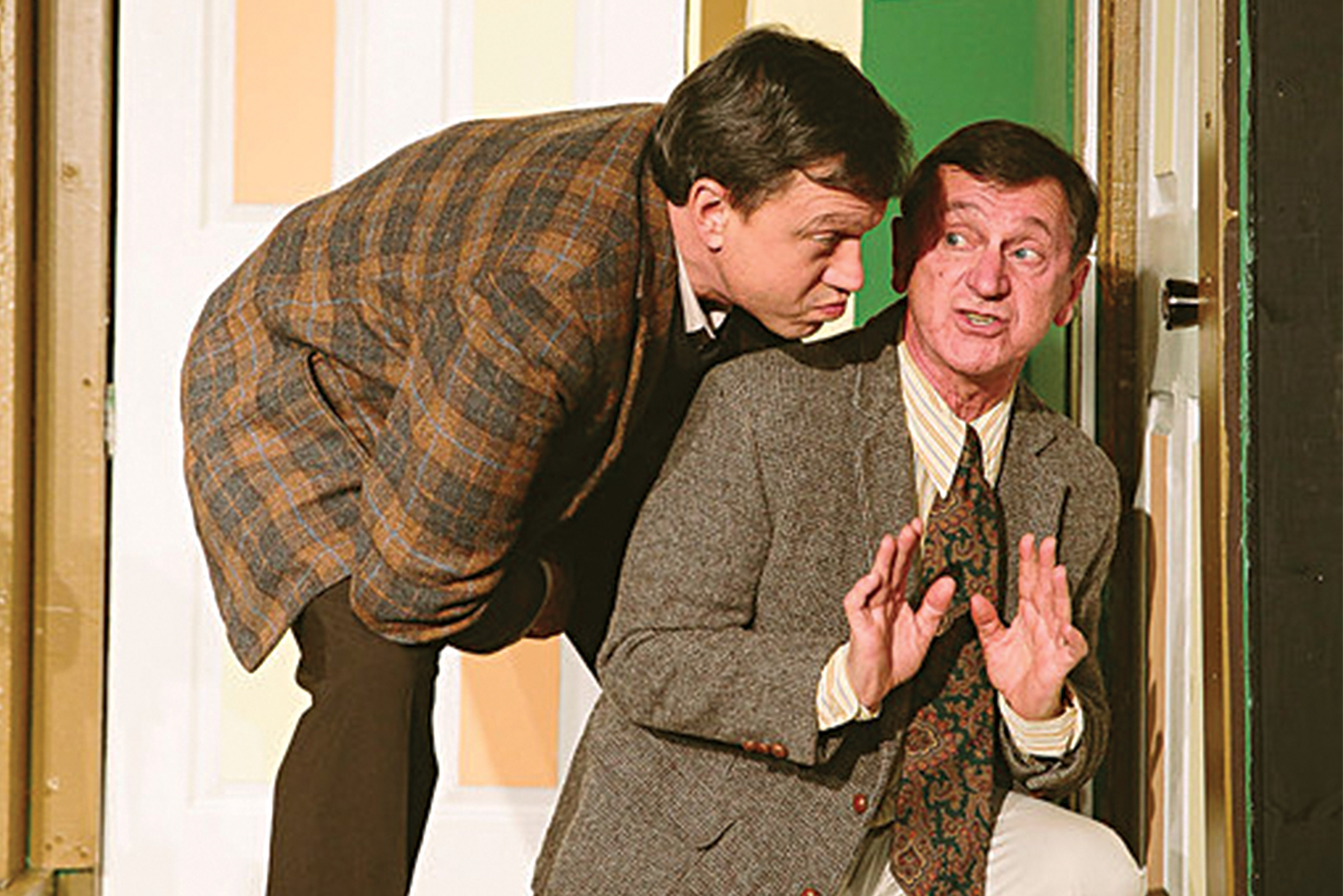 “Move Over, Mrs. Markham” is a roller coaster of clean, dirty fun.

When the set design features five doors (one slides, the rest of them slam shut), the cast includes a quartet of ladies, three of whom are occasionally in various stages of undress, and everyone speaks in an English accent (some more successful than others), theatergoers will know they have entered the British sex-farce zone.

For Central New York Playhouse’s production of Move Over, Mrs. Markham (through Jan. 23 at the company’s Shoppingtown venue), director Dustin Czarny juggles the aforementioned ingredients with a frenzied flourish. Things happen fast at the London flat of Phillip Markham (Jack Sherman), a starchy publisher of children’s books, who wrongly suspects his wife of 15 years, Joanna (Kate Crawford), of committing hanky-panky.

That’s because Phillip has found the second page of a three-page love note that was accidentally dropped by Linda (Emily K. Buss), the spouse of his business partner Henry Lodge (David Vickers), who is emphatically a cheerful cheater. (“If you don’t like your baker,” he advises Phillip, “you get your rolls elsewhere.”) Linda, who is frustrated with Henry’s playboy shenanigans, contemplates the wonders of whoopee with her own boy toy.

Also on the fringes: Alistair (Corey Smithson), an interior designer who feigns feyness so he can canoodle on the side with Sylvia (Alicia Cobb), the Markhams’ French maid. And a trio of characters introduced in passing conversation during the first act will surely turn up in the second, played by a comely Katie Tucker, a dotty Cathy Greer English and a funny-hatted, pratfalling Dustin Czarny.

Mrs. Markham was first produced in 1969, one of a string of reliable box-office hits by Cooney, best known for long-running favorites such as Not Now Darling (1973) and Run For Your Wife (1983). Cooney’s playwriting contemporary is probably Alan Ayckbourn, whose chatty drawing-room social comedies (The Norman Conquests, Absurd Person Singular) were in high demand when they crossed the pond during the 1970s.

Yet nobody is rushing to revive Ayckbourn these days, while Cooney’s works have remained evergreen, with their mirthful merging of Are You Being Served-style innuendo and the silliness of Fawlty Towers. Cooney finds his characters endearing despite their ornery instincts, such as David Vickers bringing a smooth yet smarmy charm to his philandering Henry (he deadpans to Phillip that there is no need to bring pajama bottoms to a love tryst). In contrast, Jack Sherman’s stodgy tweediness as Phillip soon morphs into a dithering apoplectic cartoon that triggers much of the slapstick. This pair of jokers also engage in acts of bottom-pinching (the art of “goosing” is discussed) and keyhole-peeping whenever a lady is in her nightie, if only to prove that Cooney’s comedy isn’t a likely candidate for Masterpiece Theatre.

Director Czarny knows where the titters are, too, as he smartly deploys the Cooney characters across the set design’s wide expanse, incorporating both the Markhams’ living room and bedroom. Central New York Playhouse’s zippy production of Move Over, Mrs. Markham offers clean dirty fun.

True Crime is Back In Action on TV
Fresh Music Friday: Eilen Jewell
To Top