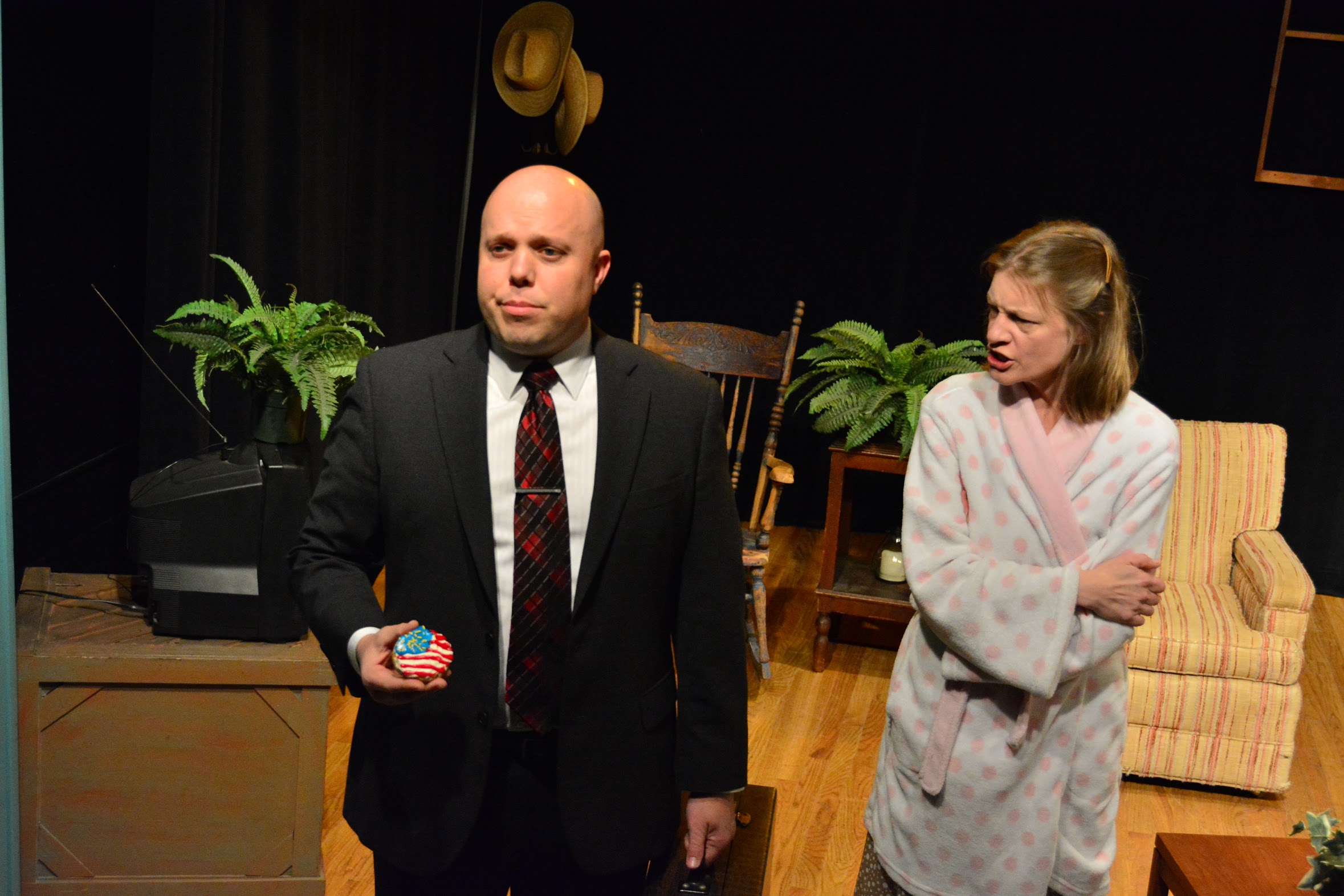 Sam Shepard’s “The God of Hell” is full of energy at Jezz Central.

“I miss the cold war.” The black absurdity of such a line, swaddled in faux nostalgia, sounds like something from Stanley Kubrick’s 1964 movie Dr. Stangelove. Instead it is from a late short work of Sam Shepard, The God of Hell (2004).

One of America’s most admired contemporary playwrights, known for Buried Child and Tooth of Crime, Shepard has not been well-served recently by local stages. Living up to its name, Rarely Done Productions introduces us to Shepard’s previously unseen dark satire with its edgy wit.

The scene is a remote Wisconsin dairy farm, just east of the Mississippi River. Frank (Trevor F. Hill), first seen buffing his boots, is a small-timer competing with agribusiness. He lives to see his heifers thrive. His fussy wife, Emma (Heather Roach), obsessively overwaters the house plants. In a playwright’s convenience, Emma seems a little slow on the uptake and so things have to be repeated to her. The emphatic rephrasing for Emma’s benefit is a reliable comic device.

One morning a smiling, self-assured, well-dressed man named Welch (Justin Bird) walks into the house without being invited. His smarmy glibness suggests an Amway salesman, but he represents no company. What he says instead puzzles Emma and us. Why does she leave her flagpole “empty” when she should be celebrating the glories of liberty with the red, white and blue? When he asks how many rooms the house has, she answers “five.” When he corrects her by saying there are six, she answers, “Oh, you’re counting the basement.”

It turns out that Frank and Emma do have something or someone to hide. He’s a hangdog-looking old pal of Frank’s named Haynes (David Simmons), who’s lying low for some unspecified reason. Emma, who characteristically misremembers his first name (Greg, not Craig), receives an electrical shock that turns off the lights whenever she so much as puts a finger on Haynes. “Just a little static,” he offers implausibly.

As the author of True West, Shepard always gives significance to geography. The continual references to Wisconsin may signal normality and banality, like football fans in cheesehead cutouts. Or he may be alluding to Michael Lesy’s hair-raising study Wisconsin Death-Trip (1974), about madness and gothic horror set among quiet green pastures. It was also the home of one of America’s prime paranoids, Sen. Joseph McCarthy. Or maybe all three.

In any case we know that Haynes has come from a Western town, whose name he forbids Emma from repeating. Welch also comes from the West, specifically Colorado, in pursuing Haynes. And it is in the often thinly populated West that people, or rather the government, test dangerous things there.

“Do you know what plutonium is named for?” Haynes asks. “Pluto: the god of hell,” he answers himself.

Although Haynes has been hard-bitten and cryptic until this point, he lets loose on plutonium’s dangers. Tasteless, odorless and invisible, it can last for 500,000 years. Its power can set fire to raw earth and keep it burning for 30 days.

We quickly discern that Welch’s pursuit, as a kind of Rotarian Javert, means he’s from the “government” and he knows everybody’s secrets. None of this should imply that Shepard is lining up with the libertarian nutcases, like the Bundy family and others who recently occupied an ecology station in Oregon. God of Hell premiered in late 2004, after President George W. Bush’s second electoral victory, when voices asking if the invasion of Iraq was really in the national interest were labeled “surrender monkeys” or, worse, “French.”

C.J. Young, longtime artistic head of Appleseed Productions, has assembled a bang-up cast for this explosive show. Young clearly relishes the more intimate space at Jazz Central in guiding David Simmons’ subtle, nuanced Haynes, the anguished existential anti-hero. Young and Simmons assure us that Haynes is the only character we can believe but they never push him so far as to make us think he isn’t guilty of something.

Justin Bird as the government man seems to be having the most fun. His villain gets most of the laughs, even though the lines aren’t that great on paper. Heather Roach, one of the most versatile performers we have, never plays down Emma but allows her a kind of Yogi Berra wisdom; she’s much smarter than she first sounds. Similarly, Trevor F. Hill’s Frank is full of surprises. Welch dismisses him as a “useless lumberjack,” but he’s the one who misses the Cold War.

The God of Hell runs a little under 70 minutes. Every second crackles with energy.

Sammys Shebangs Shook, Rattled and Rolled
Cause and Effect
To Top