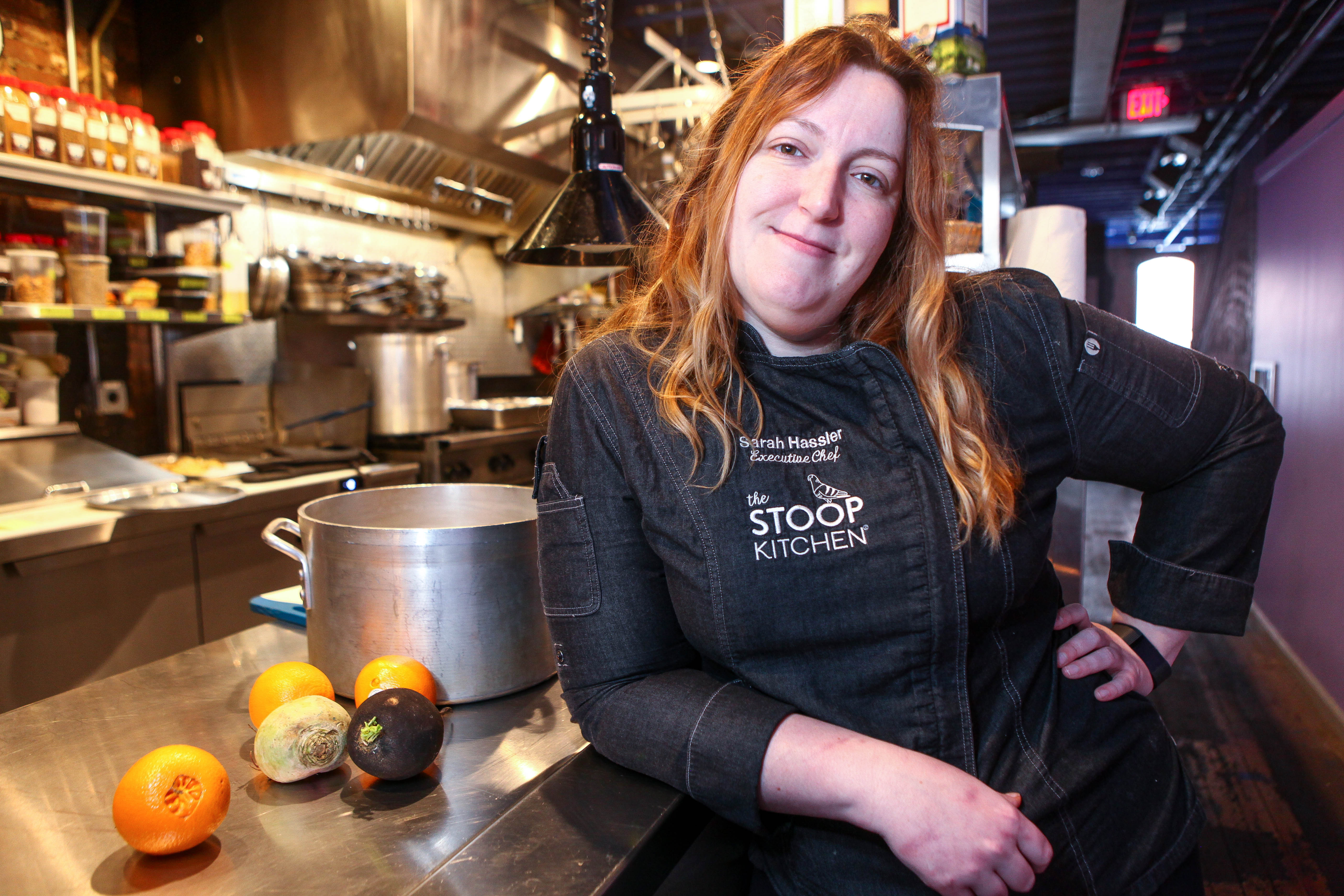 The Stoop Kitchen, 311 W. Fayette St., has been open for less than six months, but its local roots run deep. Owner Eric Alderman ran the original Stoop from 1995 to 2006. For more than a decade, the three-story brick building stood empty, its neon sign dark and its eclectic restaurant missed by many. Last fall, after extensive renovations from top to bottom, the Stoop came back to life as the Stoop Kitchen and the Stoop Bakery Cafe.

Establishing local roots in the Stoop Kitchen’s kitchen and on the ever-evolving dinner menus is executive chef Sarah Hassler. She brings to the table a passionate commitment to locally sourced ingredients and a firm belief that menus should be inclusive. That means for vegetarians, vegans, those who must avoid gluten, dairy and nuts, people doing Whole 30 or the ketogenic diet: everyone.

Hassler works with more than 25 farmers, she says, and about 80 percent of the ingredients on the Stoop’s menus are sourced within 50 miles of Syracuse. And that’s during the fall and winter.

So imagine what’s to come from Hassler and company in spring and summer, when local produce has its moment. They’ll be welcoming ramps and rhubarb and snapping up strawberries and snap peas and spotlighting them on the Stoop Kitchen’s menus. “Local is really important to me,’’ Hassler says.

Neil Miller is the founder of Farmshed Harvest, a regional food hub based in Syracuse that distributes organic produce and sustainably raised meat from family farms to restaurants and other wholesale buyers. He has known Hassler since her time as a sous chef at the 125-seat Veraisons restaurant at Glenora Wine Cellars on Seneca Lake, and is excited to see her lead the culinary team at the Stoop Kitchen.

“I’m a big fan of Sarah,’’ Miller says. “She’s a rock star and she’s doing something very special at the Stoop, both in terms of the team of chefs and crew she’s put together, and manages and what she’s doing with very creative, seasonally driven menus. She’s not hyping what she’s doing, she’s just kicking out solid, inventive New American cuisine using seasonally available ingredients where and when she can.’’

Hassler’s knowledge of cooking with the seasons is intuitive: She spent her early childhood on a dairy farm in rural Cameron Mills, Steuben County. She attended local schools and, like many young people, dreamed of living somewhere else. She attended Corning Community College, got married, moved to Seattle, worked in cafes and restaurants, got divorced and returned home. “Restaurants have always been part of my life,’’ she says.

Working in the front of the house eventually led to her interest in the back of the house. At 26, she packed her bags for the Culinary Institute of America, in Hyde Park. “Here I was with all these 18-year-olds, cutting potatoes 20 different ways for three weeks,’’ she recalls. “You whine about it and don’t understand it when you’re doing it, but you understand it when you get out.’’

Following graduation in 2012, she worked at both The Cellar, a tapas and wine bar in Corning, and at Veraisons at Glenora Wine Cellars. At Veraisons, she worked with acclaimed executive chef Orlando Rodriguez, a champion of regional fare and showcasing the bounty of the Finger Lakes.

She wasn’t looking to leave Veraisons, but Hassler’s boyfriend saw an ad for a restaurant in Syracuse seeking a chef with a focus on seasonal, local cuisine. Hassler met with Stoop Kitchen owner Alderman (and “chief inspiration officer” Abigail Henson, who is no longer with the restaurant), and prepared a multi-course meal at Alderman’s home that helped seal the deal. She joined the Stoop Kitchen team in February 2017.

Seasonal menus give chefs an opportunity to introduce new things to their diners four times a year. The Stoop Kitchen will change its menus every six weeks, or eight times a year. That includes dinner, bar and Sunday brunch menus, entrees, appetizers, shared plates and desserts.

“We’re excited for the new dishes,’’ Hassler says. “Nothing kills a cook like doing the same thing 500 times.’’

Some of Hassler’s favorite dishes from the current menu include porchetta with local grape agrodolce (sauce), potatoes aligot (mashed potatoes with cheese) and smoked sherry mushrooms; Faroe Island salmon on lemon risotto over espresso, with parsnips and Marcona almonds; and a ragout of braised oxtails with poblano peppers and sweet potatoes, served with pappardelle pasta. Fan favorites like Buffalo Brussels sprouts (sprouts tossed in spicy sauce, served with blue cheese dressing for dipping) and bacon-wrapped pickles sometimes carry over to a new menu.

For Hassler, each new menu begins with a trip to the library to study cookbooks, thinking about what’s in season and what diners want to eat in August, October or January and asking her team a question: What inspires you? “Our binding philosophy is that we are all here to learn,’’ Hassler says, “and that it’s not worth doing anything if you don’t want to do it well.’’

Dinner is served at the Stoop Kitchen on Wednesdays through Saturdays, 5 to 10 p.m., and Sundays, 5 to 9 p.m., with Sunday brunches from 10 a.m. to 2 p.m. The Stoop Kitchen Bakery Cafe is open Wednesdays through Fridays, 6:30 a.m. to 4 p.m., and Saturdays, 9 a.m. to 2 p.m., featuring coffee, tea and a selection of artisan breads, pastries, bagels, doughnuts, croissants, quiches and other baked goods created by master baker Yemen Tounsi. Call (315) 257-7000 or visit stoopkitchen.com. SNT

Diana Jacobs Band. Good Metticine (independent)
Catwalk On The Wild Side
To Top