The awards bash for local musicians rocked, rolled and remembered

The red carpet was set up Friday, March 7, inside the Palace Theatre’s lobby, unfurled and available to anybody–musicians and music lovers alike–who wanted to step up next to the big, shiny replica of the SAMMY’s trophy, its backdrop emblazoned with 11 event sponsor logos behind them, so photographer Jack O. Boccino could capture the moment.

There were plenty of takers: men in suits or blazers, women in gowns or dresses, everybody in big smiles.

Inside the theater, memories were made. Presenters announced results and handed over the real-deal trophies. Winners delivered heartfelt acceptance speeches. Five bands showed why the music scene has been celebrated since Frank Malfitano founded the Syracuse Area Music Awards show in 1993. 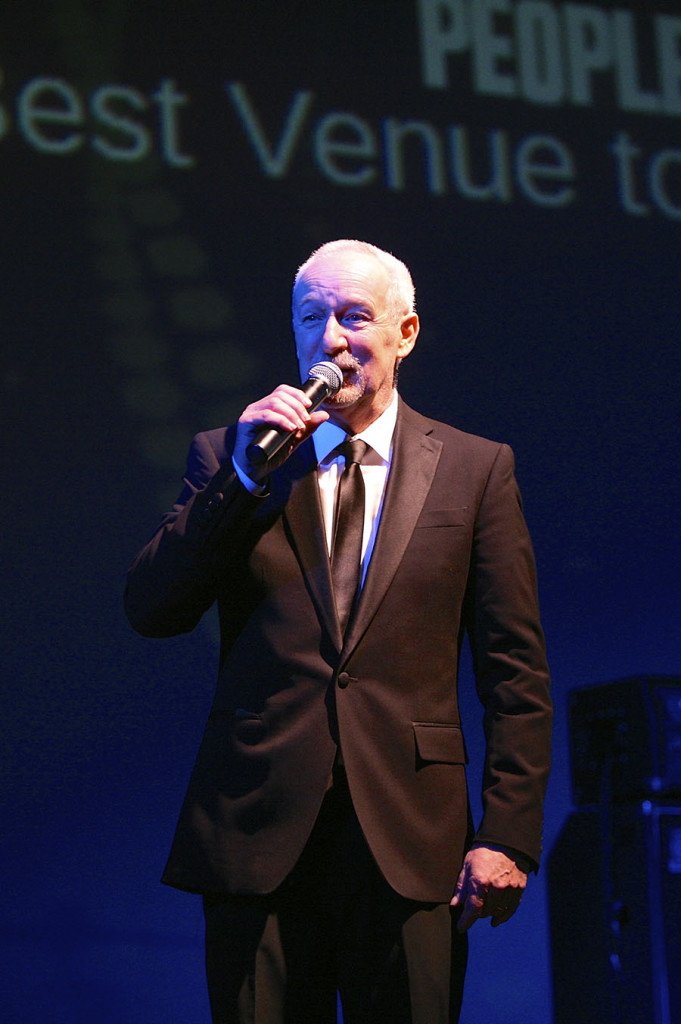 Master of ceremonies Skip Murphy, a member of the Sammys Hall of Fame for his talents on the harmonica, kept the ceremony moving along quite nicely with a mix of quips and congratulations. He welcomed the capacity crowd to the 16th edition of the event–at times in its history, it was held every 18 months–by declaring that Sammy is old enough to drive.

Dave Frisina, radio host on rock station WXTL-FM 105.9 (The Rebel), introduced the musicians and bands who’d been inducted into the Sammys Hall of Fame at the March 6 at Upstairs at the Dinosaur Bar-B-Que. Frisina, a member of the Sammys Hall of Fame, too, reminded the crowd how his Sunday-night Soundcheck show, which celebrates Central New York music, is in its 35th anniversary year. “I’m now playing kids whose daddies I played the first time around,” Frisina said.

As the hall of fame class of 2014 filled the stage–there were a dozen people who’d played at one point or another for the Homel-Alaniz Band alone–Murphy told the crowd: “You’re looking at Syracuse history right here.” The honorees, including the Flashcubes, the Tiffault Family, Art “Legs” Robins, the owners of Gerber Music and music educator John Spillett, waved as the crowd applauded their storied past.

The biggest cheer, though, seemed to come for the acknowledgement that metal maven Ronnie James Dio had posthumously been honored with the Lifetime Achievement Award. 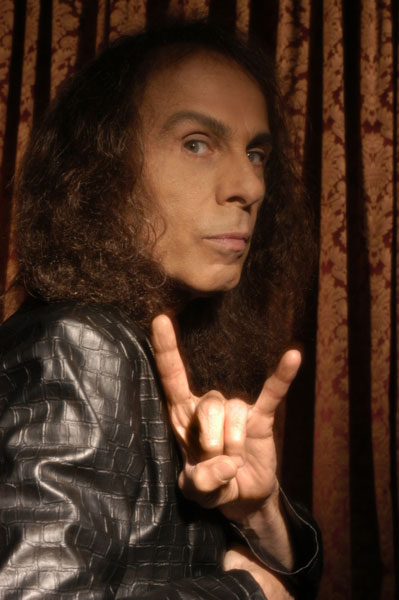 Murphy had fun with presenter state Sen. John DeFrancisco, on stage to award the best jazz trophy with drummer Susan Royal. Murphy joked that he’d like to have a picture taken with the senator to help the emcee’s criminal standing. DeFrancisco told Murphy he was on his own.

Jesse Collins won that Best Jazz trophy without any drama; his album was the only nomination in the category selected by a panel of judges from submitted recordings.

“Syracuse has a great music scene,” Collins said graciously. “I’m thankful to be receiving this award and thrilled to be part of the scene. I was born in Baldwinsville. I came back here from New York {City} so I could be part of this scene.

“Gerber Music and the Flashcubes! This is my whole growing up,” Long said.

He said that he and his co-host have gone through “five cycles of hipness” in their quarter-century on air together.

The award in the category was given to two of the nominees, the Ruddy Well Band and the duo of Loren Barrigar and Mark Mazengarb. 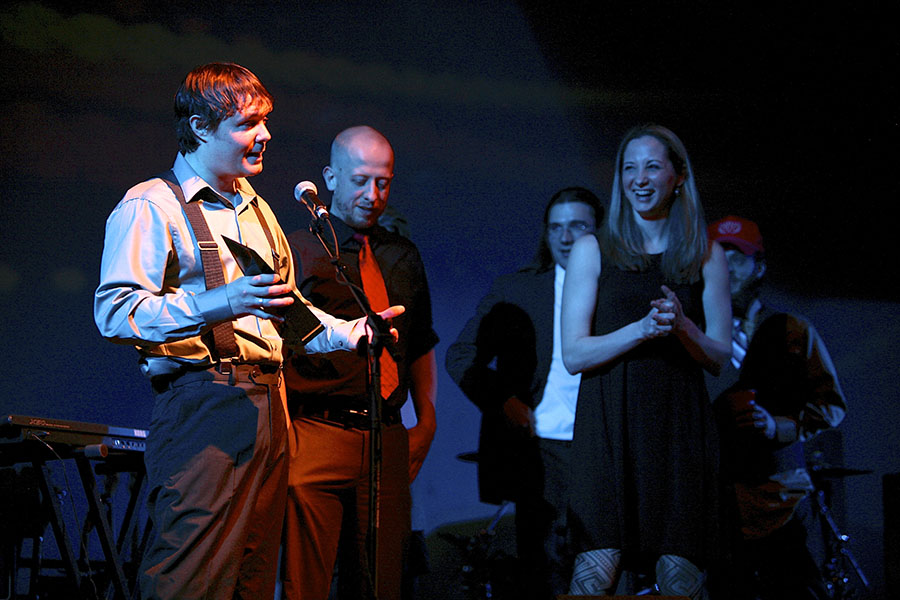 Andrew Ruddy, Monique Ritter, Ryan Burdick, Steve Scuteri and Mike Sisto beamed and waved. Ruddy complimented the fellow winners in the category, too. “I went and saw them play at Onondaga Community College, and I thought, ‘Holy crap, these guys are good,’ ” he said, drawing a laugh.

Jeremy Johnston, co-owner of SubCat Music Studios in Armory Square, accepted for Barrigar and Mazengarb, who were at a gig. Johnston had accompanied the pair for a tour in Europe to identify the best songs for their album.

Later, the Ruddy Well Band became the only two-time trophy winners for the night, taking the People’s Choice Award for Best Band. “I want to thank our fans for seven weeks of steady voting,” Ritter said of the online contest. 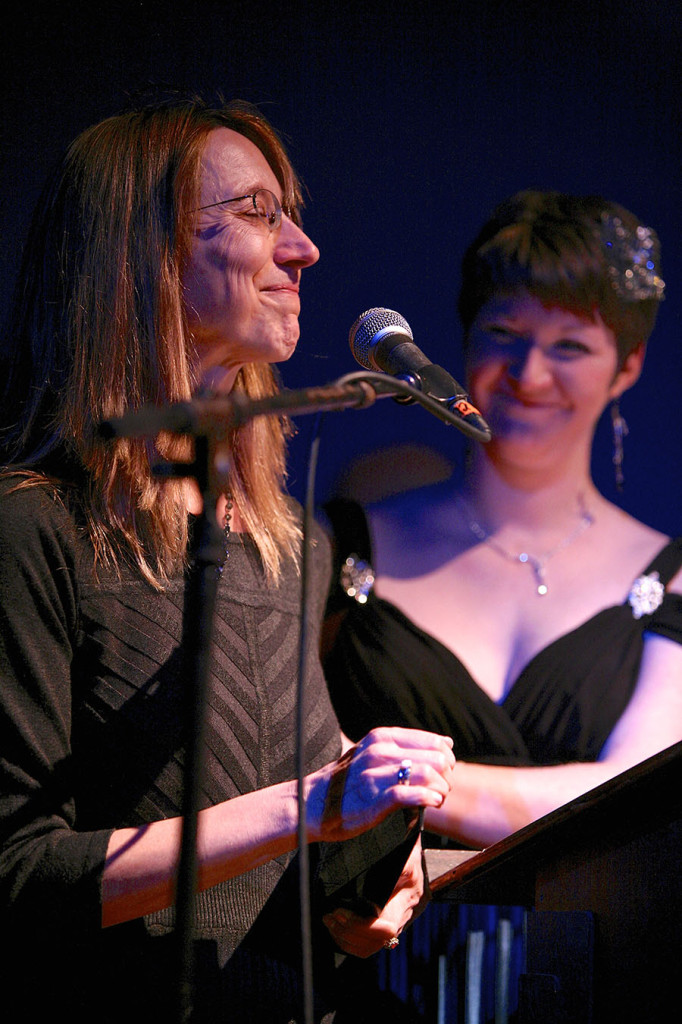 Martha Grener and Lacey Lee, of Duo L’Adour, accepted the trophy for Best Other Styles, and then Grener tearfully reported that Lee was moving to St. Louis with her husband, signaling the end of the group.

“It’s hello and goodbye,” Grener said. “To all of you young people out there who are beginning the journey, as my husband, Christopher, said, ‘It’s in the doing. And when you have your doubts, just gun it.’”

Other highlights in the award-getting included Mick Fury turning a cartwheel down the aisle after he and his band Midnight Moonshine won the Best Country trophy; Sammy Hall of Famer Mark Doyle sighing in relief about avoiding “an epic fail” after the Mark Doyle and the Maniacs’ studio album Pushin’ beat his band’s live album and three other bands’ recordings to win the Best Blues trophy; and Joe Altier and Brian “Slider” Azzoto’s praise for the work of Jocko Randall and Andrew Greacen of More Sound Studio for their work on their Elephant Mountain recording that won the Best Rock trophy.

Malfitano also returned to the stage at the Sammys for the first time since 1998, after he left as executive director of the Landmark Theatre and the event moved first to an outdoor stage as part of the Taste of Syracuse, then to the Pirro Convention Center ballroom and to the Palace for the second year in a row.

Malfitano thanked Sammys chair Liz Nowak for inviting him to give the Founders Award to the Madisons, a 1950s-era Syracuse vocal band. Malfitano praised the Madisons for “enriching the fabric of our community,” calling them Syracuse’s answer to the Beatles back them.

Two original members of the band, Jimmy Foran and Donnie Jones, thanked their wives of 50 years. Jones thanked Foran for everything he did in the band’s day. “He is Mr. Madisons,” Jones said.

The musical performances drove home the richness of the Syracuse music scene through the decades. 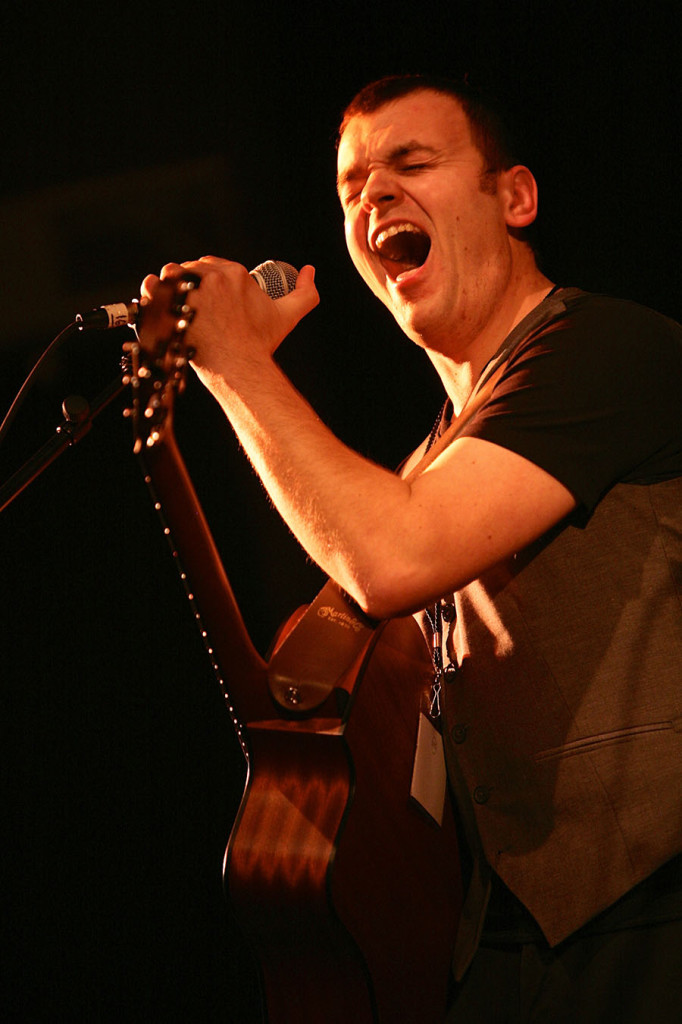 The Mike McKay Band, last year’s winner of the Best Pop award, had fans dancing with their set. Brownskin filled the theater with vibrant soul and rhythm’n’blues, sounding fine despite the fact that founding drummer Nate Brown was in the hospital. Jeff Jones led his power trio, Pale Green Stars, through a loud and gritty set that spotlighted his emotional vocals, the passionate sound and stage moves of Brian Coyne and the steady beats of drummer Jeff Tripoli. Langston Masingale and Peter Cappelli led the Goonies through a ripping set that bridges the cool of hip-hop and the thunder of rock.

The Flashcubes wrapped up the night with an emotional set of power pop that showed Syracuse all over again why the world fell in love with their sound in 1977 and has remained attached since. Gary Frenay, Arty Lenin, Paul Armstrong and Tommy Allen dealt equal parts smooth and bombast—part British Invasion-like cool and part Cheap Trick Live at Budokan-like thunder—with a set that included their biggest hit, “Christi Girl,” and “Got No Mind” and “You’re Pathetic.” 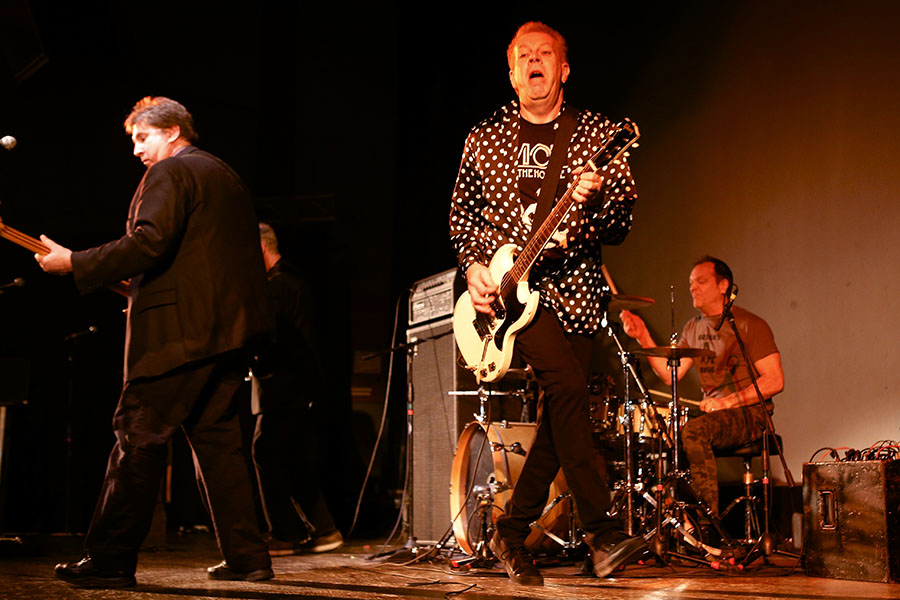 Then Frenay invited an old friend to share one last song. Tom Kenny jumped up to join the ‘Cubes, and the rocker also known as Tomcat, most famous for voicing cartoon star SpongeBob SquarePants, gave his hometown a taste of what it was like those decades ago when he, the Tearjerkers and the Flashcubes kept rock lovers jumping and dancing.[emptybox]

CLICK HERE to see more photos from the SAMMY Awards

Bound for Glory
The Ties That Bind
To Top