Everyone felt like part of one big family during the March 6 Hall of Fame festivities, which were part of last week’s Syracuse Area Music Awards (SAMMY). Even those not related by bloodline seemed connected to the various inductees and speakers throughout the night. And those that did share last names were the most emotional of all.

The awards ceremony, held again at the Upstairs at the Dinosaur Bar-B-Que venue, was emceed by longtime Soundcheck radio host Dave Frisina of WTKW-FM 105.9 (The Rebel). Fresina offered thanks to the SAMMY’s board before handing off the microphone to local bandleader Maria DeSantis, tasked with presenting the Educator of the Year honor to former Solvay High School band director John Spillett. 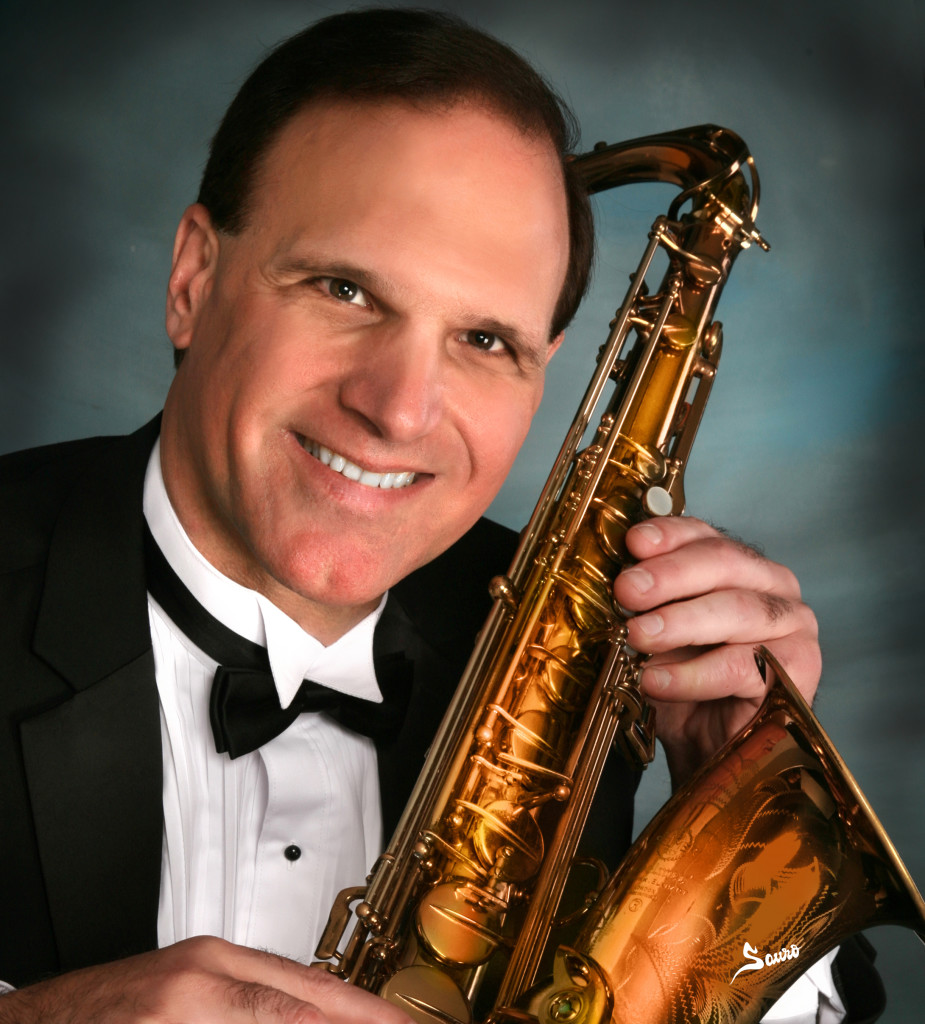 Maria heads the DeSantis Orchestra, started by her father, Mario, in 1947. And Spillett’s connection to the DeSantis family goes way back: Mario, then a music shop owner, sold him his first saxophone and later helped Spillett land his first professional gig and teaching job.

“We performers love what we do,” DeSantis began. “But educators are directly involved in perpetuating the next generation of music-makers.”

DeSantis rattled off an impressive list of Spillett’s former students, including Blue Man Group player Jeff Tortora, a 2010 Sammy Hall of Fame inductee. She emphasized that Spillett brought his students to live gigs and gave them access to music professionals. “And when {those professionals} spoke,” DeSantis explained, “he was taking voracious notes, too. It was also a lesson for himself. John always seeks the greater knowledge of his instrument.”

DeSantis concluded by stating that a good teacher is not necessarily a good player and a good player is not necessarily a good teacher, but Spillett is both. And while we don’t remember the last five American Idol or Nobel Peace Prize winners, we remember the people “who supported us, believed in us, and most importantly, made us believe in ourselves.”

Spillett’s short acceptance speech noted several influential people in his life who were also in the audience, including Mario DeSantis and saxophonist Joe Riposo. He was followed by Sen. John DeFrancisco, who emphasized that “public officials are always talking about economic development, but the heart and soul of a community is in the arts.” 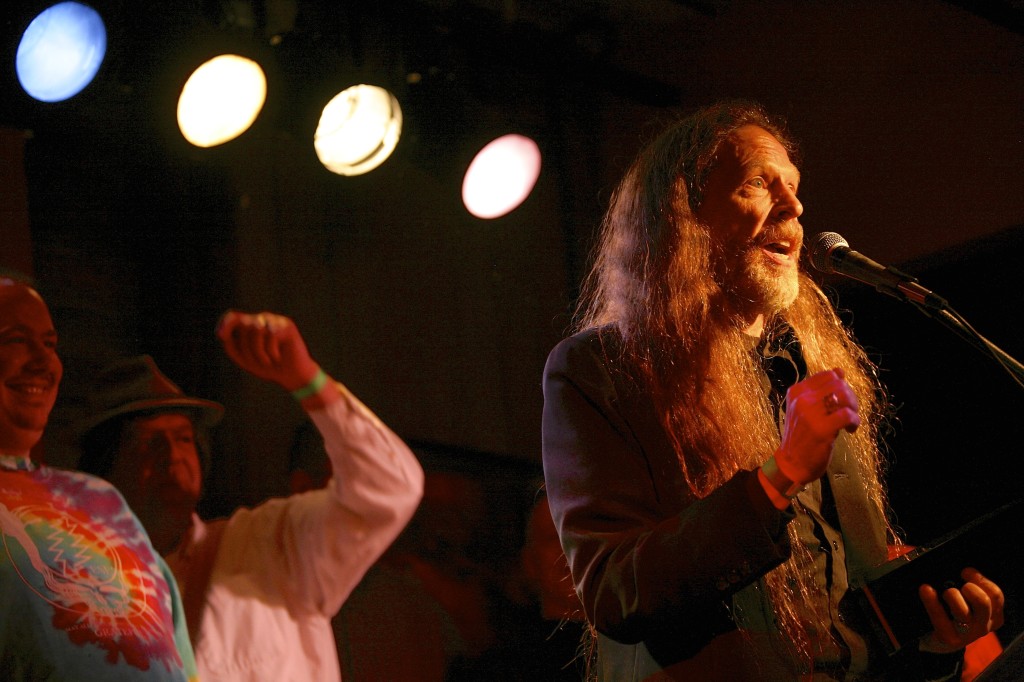 Frisina got more laughs from the crowd when he talked about his first Grateful Dead show in 1977 and how he wasn’t aware of how good it was, “for a variety of reasons.” Then came some short, sweet, but very heartfelt words from Jay Vincent, John Moyer and David Homel of the Homel-Alaniz Band.

“I haven’t been here for 18 years,” Moyer said. “But I had a great time here and I’ve been involved in the music industry for 40 years because of it. The reason I’m here tonight is that music is a message and this band created a scene.”

The band created that scene from 1987 to 1993 with 330 consecutive Monday shows at the former Sutter’s Mill, always to capacity. Although Alaniz died in 2009, his son Jacob continues to carry his father’s musical torch.

“It’s an unbelievable bonus,” Homel said. “We got rewarded while we were doing it. You gave us so much love for so many years.” He motioned to the large group of musicians behind him, many of which remain the cream of the Syracuse crop, “I love all these guys,” he said. “I met Ese in 1974 and he would love this, too. His smile was huge. And he is smiling.” 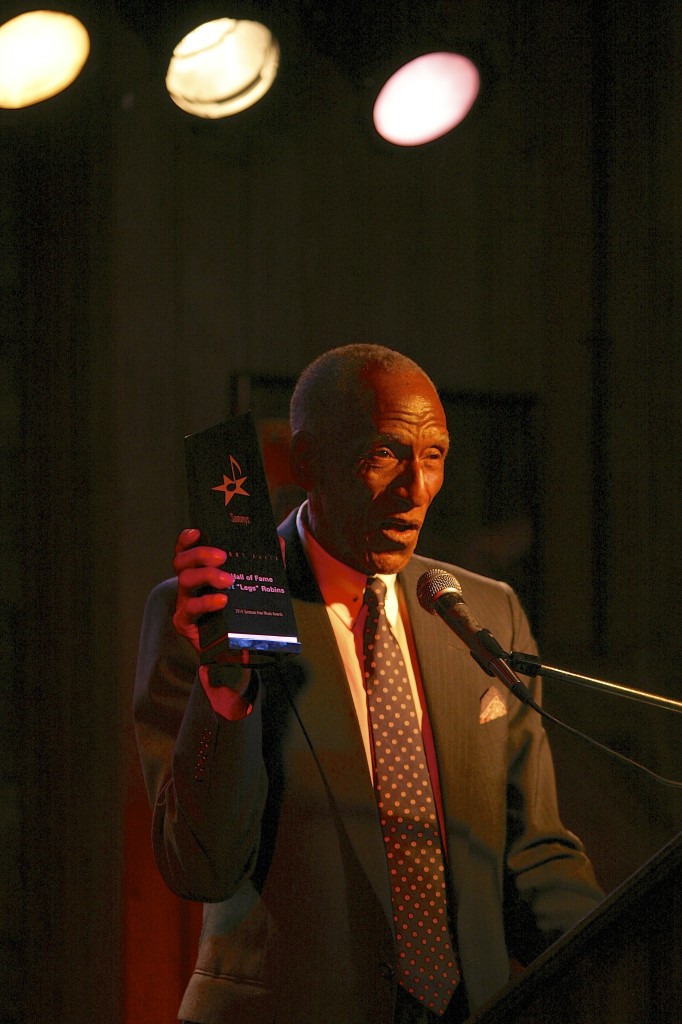 Isreal Hagan, the multiple Sammy winner, singer and bassist of Stroke, was concise in his remarks, stating that the next inductee is “the best vocalist and best entertainer in this town, period. You might not know him and if you don’t know him, make sure you get to know him.”

Art Robins mounted the stage, clearly moved by the impact of the award and without a speech. “I feel estranged memorizing words from a page,” he said. He gave heartfelt appreciation to the many players he’s worked with over the years and gave the greatest thanks to his family, many of which turned out for the ceremony as an entire long table rose in recognition. He wiped tears away as he left the stage.

The next presentation was another tear-jerker as Lee Tiffault spoke for his family, including his brother Mark, a drummer for many local bands, and sister Suzanne, a music educator at North Syracuse Junior High School, also present, and notably his late father, Leighton “Sox” Tiffault. “Public speaking is not my medium,” he assured at the beginning, but within just a few words, he had the audience rapt.

He told stories of his father playing a cocktail hour, teaching his boys that people were always listening to the music, even if it didn’t appear so. Lee talked about the endless hours Sox sat at the piano and the suitcases full of compositions that were scattered about the house and he emphasized where the heart of his father, and his siblings, lie.

“Accolades are great and this means a lot,” he said. “But dad was all about the work. If art was about you, you were denying yourself a much greater experience. I think about the stories, reinventing in front of my eyes. He’s still teaching me things. We’re just trying to carry on and be about what he was about: be committed to the work.” 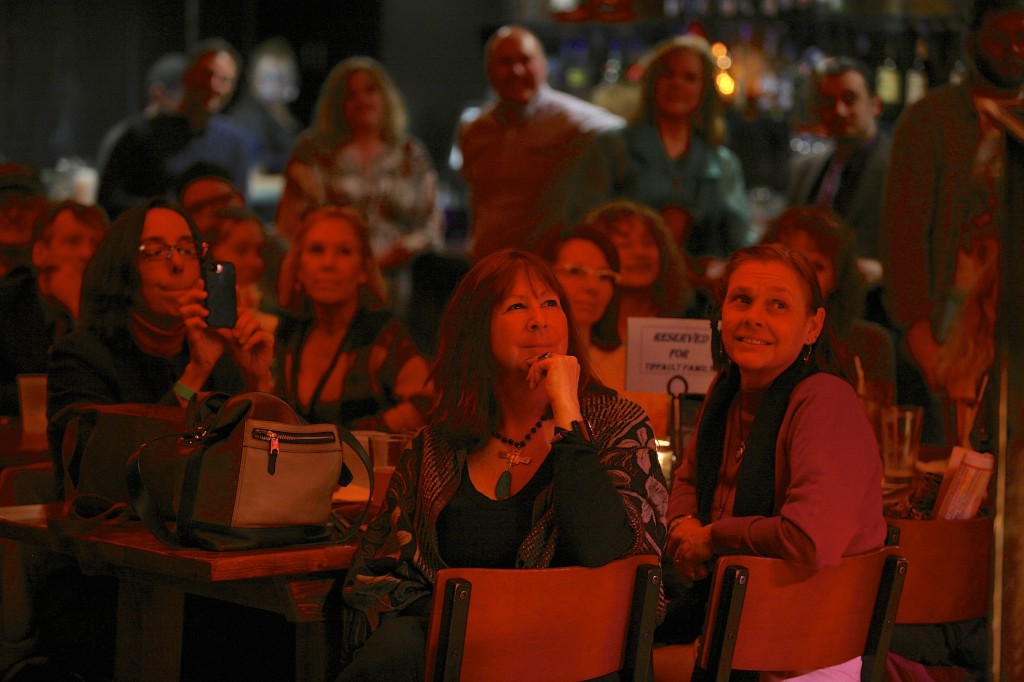 The family sentiment continued with a perhaps unlikely inductee, as Dave Novak and Gary Frenay introduced Gerber Music, a legendary music store started 50 years ago that served as a meeting grounds for musicians of all types. They went there for gear, for the latest records and to see who was playing when and where. It was a scene incubator and one where the customers, as well as employees, became something of a musical family.

Frenay listed the impressive array of names of former Gerber employees and each of their corresponding bands at the time. He also emphasized that the Flashcubes (also a Sammy of Fame winner this year) would never have existed had it not been for Gerber Music. 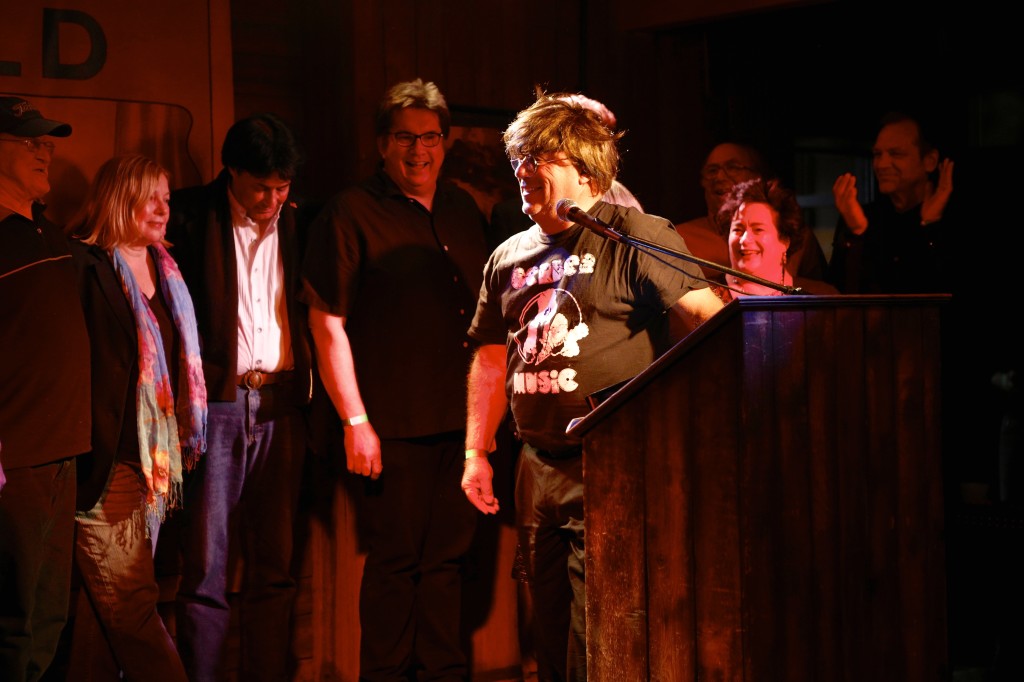 Frenay didn’t go far from the stage as the next induction was that of the Flashcubes, a power punk band that has seen several resurgences years after their heyday from 1977 to 1980. Like the Beatles and the Ramones, the Flashcubes weren’t welcomed immediately, but after two tours of Japan, years of increased popularity and a Sammy Award for Best Rock Album in 2013, the Flashcubes have proven their place among the best. 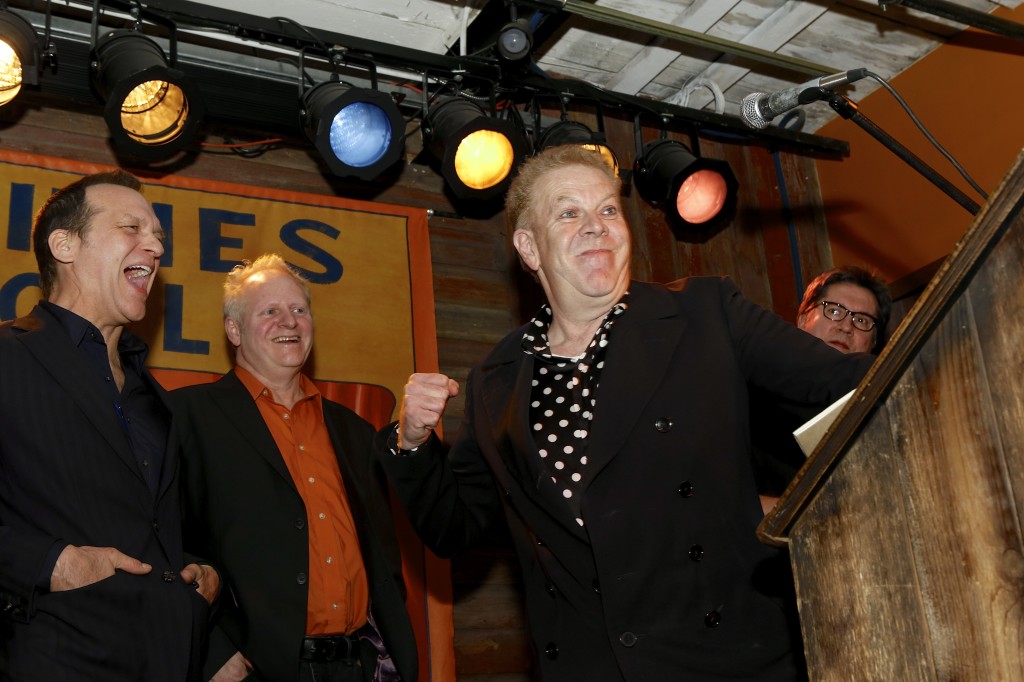 The band members each gave short, funny, acceptance speeches, with Paul Armstrong explaining his list of people he’d like to punch and Frenay telling tales of the road. He concluded on that similar family note: After 37 years, everyone in the band is still best friends.

The evening ended with the Lifetime Achievement Award, as local music historian Ron Wray lauded the late Ronnie James Dio, an entertainer known around the world, although his roots were in Cortland. He gave a full history of Dio as a performer and as a person and acceptors on the stage included Dio’s son, Dan Padavona, Dave “Rock” Feinstein (inducted in 2011) and the internationally known Mickey Lee Soule. However, it was Padavona’s final words that wrapped the ceremony perfectly, once again hitting on the theme that had underscored the night.

“Four years ago this May, I said goodbye to my dad,” Padavona said, pulling tears back out of finally dry eyes. “My parents split when I was 4 years old so there was always the tension of the kid left behind. My father and I talked about getting together but always put it off until cancer took him. The music speaks for itself, but if he were here now, he’d kiss us all goodnight and tell us to remember what matters most. That’s family.”