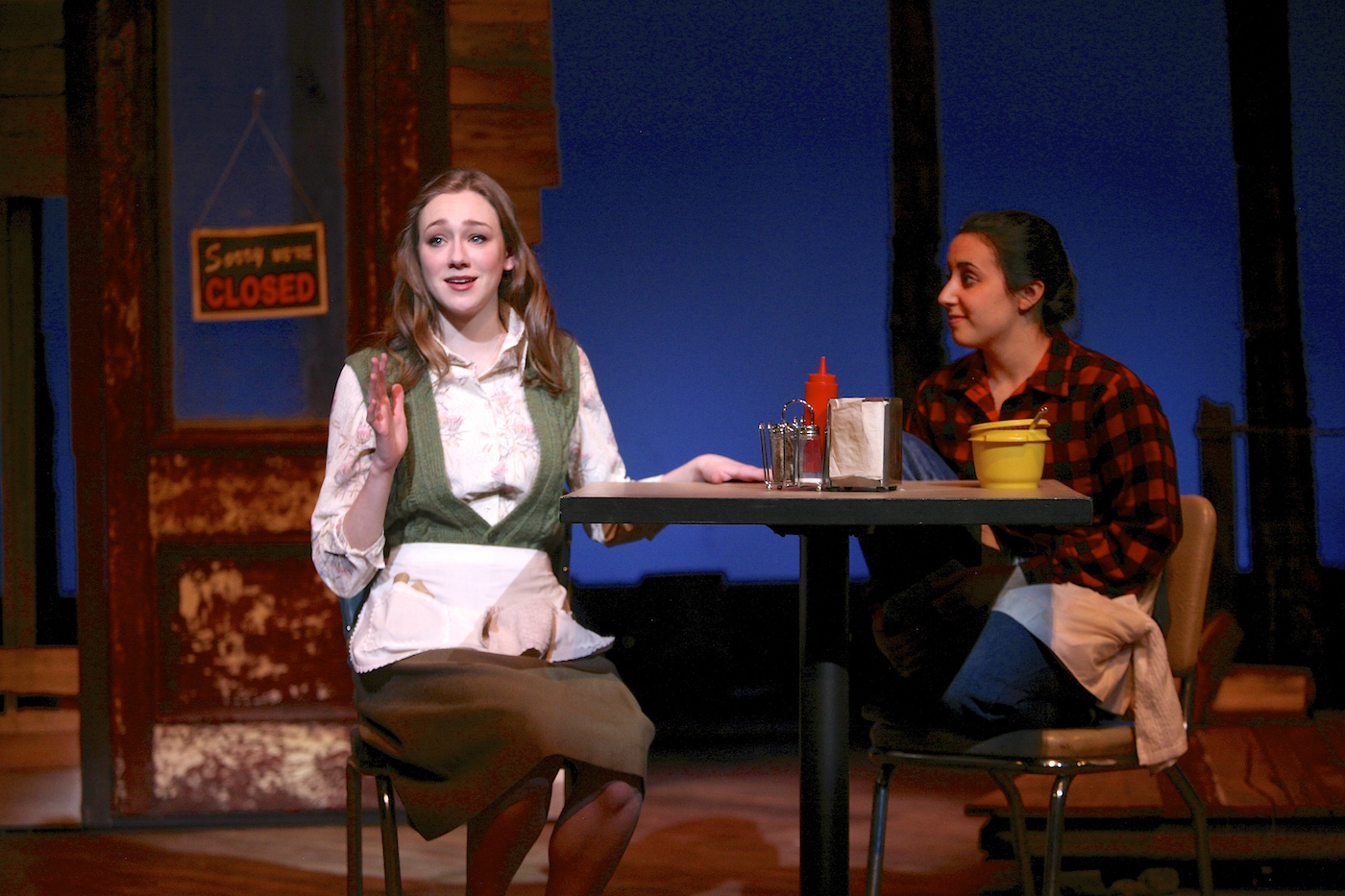 “The Spitfire Grill” continues to gain ground at Syracuse Stage.

There’s been much talk in the current presidential election about rural folks who feel they’ve been left behind. James Valcq and Fred Alley’s The Spitfire Grill: A Musical, the current production from the Syracuse University Drama Department, could be their show.

It’s set in Gilead, a Wisconsin burg hard hit by the closure of the local quarry. Mary Olin Geiger’s scenic design suggests blight and decay. In case we miss the point, music director Brian Cimmet brings the musical ensemble on stage dressed in shabby jeans and flannel shirts. Action begins when a scruffy female ex-con, Percy (Maria Bufalini), wanders in and hopes the sheriff, Joe (Michael Roach), can help her get a job, any job.

Spitfire, both the 1996 movie and the 2001 off-Broadway musical, have up-and-down histories but retain coteries of loyal fans. Lee David Zlotoff’s movie, set in Maine, premiered as a Sundance Film Festival audience favorite, and then was released nationally to mixed reviews and indifferent box-office.

Wisconsin natives Valcq and Alley reset the action and tinkered with some of the characters. Alley died at age 38 just before the show’s disappointing two-week run, which turned out not to be a bad omen at all. Despite its unfashionable bluegrass and folkie score, its lack of a single hit song or a boy-meets-girl love story, The Spitfire Grill: A Musical has steadily been gaining audiences in regional theaters. Chalk it up to the faith in redemption. Not for nothing is the town called Gilead.

Irascible, gray-haired Hannah Ferguson (Jenna Najjar) has been trying to sell the semi-unprofitable grill of the title for 10 years and hardly needs to hire an extra hand. Even more when she’s a taciturn kid with a criminal past. Tall soprano Shelby (Kelsey Roberts), married to Hannah’s bitter, controlling nephew Caleb (Jerrod Everett), quickly comes to Percy’s aid. Some of her musical numbers give useful exposition, like word of Hannah’s lost son, but more often she’s a facilitator and an advocate.

Together she and Percy coax Hannah into a seemingly implausible plan. They’ll run a national raffle, asking contestants to turn in a $100 check along with an essay about why they would like to run the broken-down grill. Against all expectations, the contest brings in mail by the wheelbarrow, as celebrated in the exuberant first-act curtain number, “Shoot the Moon,” with checks flying all over the stage.

Reading the poignant essays, which dominates the beginning of the second act, becomes the center of action, even though there are buds of romance and startling reappearances. Lonely, disappointed people all over the country, many in soulless apartment buildings, yearn for the community and fellowship of the only diner in a small isolated town, like Cheers in the boonies. Not unlike the end of It’s a Wonderful Life, the folks in Gilead already have the best that can be had, and Percy can join in.

Don’t let this spare summary encourage a sarcastic “Awwww.” Director and department chair Ralph Zito keeps the sentiment reined in and stages Spitfire Grill to exploit its strengths. Musically, it exceeds expectations. Skirting into country idiom does not forbid passages of subtlety and affecting nuance. No less than Stephen Sondheim is on record as being one of Spitfire’s admirers.

Not surprisingly, Percy gets many of the best numbers, even though she is not, strictly speaking, a romantic lead. This is a breakout performance for Maria Bufalini, who expresses the widest range of emotions and travels the longest arc. Her first-act duet with Shelby, “The Colors of Paradise,” is the top moment of the show.

Although hardly a youth-oriented vehicle, The Spitfire Grill turns out to be better-suited for a college company than one might expect. Jenna Najjar scores high as Hannah, in the usually thankless task of playing a character three times her age. Ethereal Kelsey Roberts’ Shelby almost feels like the lead. And in the unsympathetic role of Caleb, wonderful Jerrod Everett’s “Digging Stone” takes us back to reality.