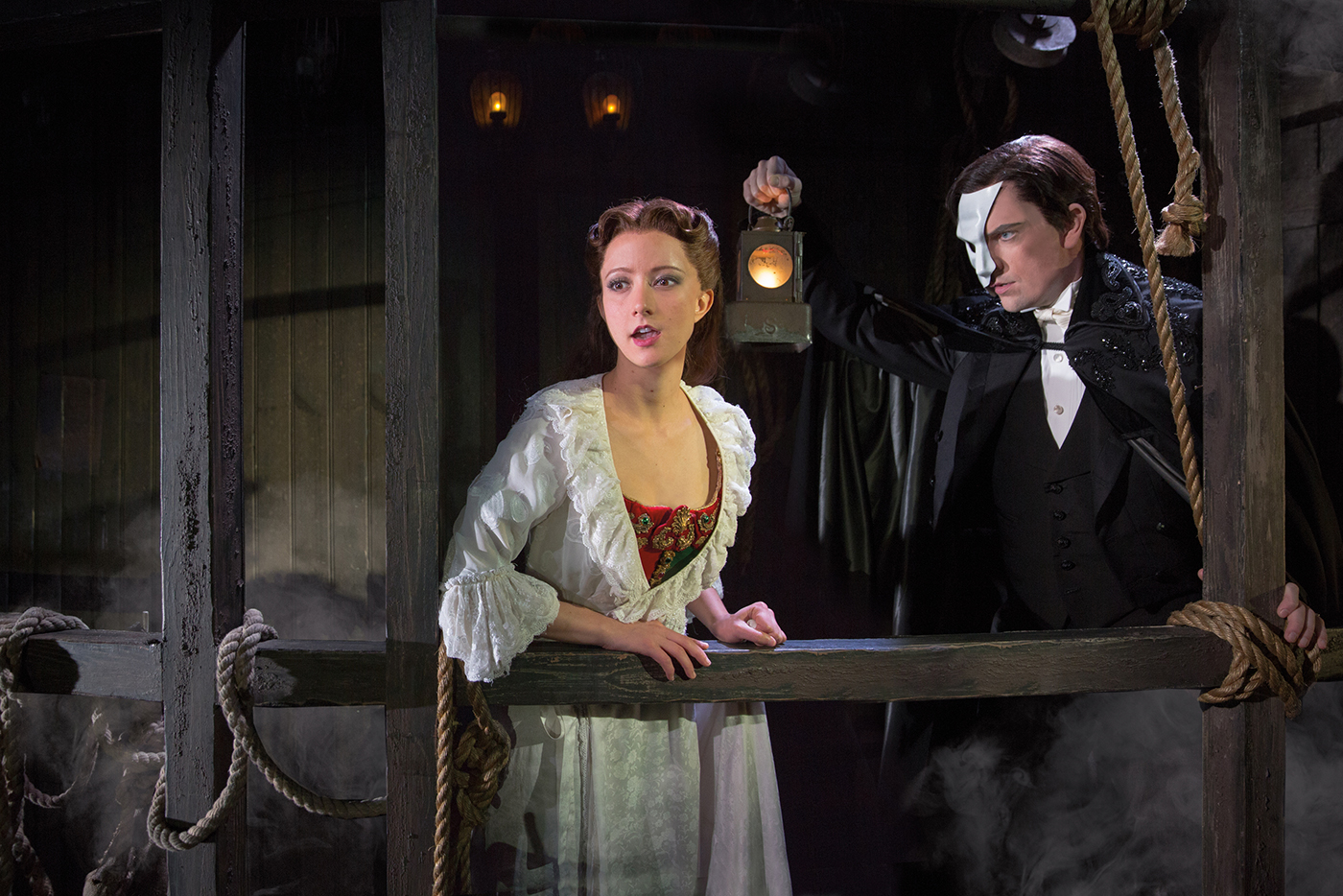 For the first time in a decade, The Phantom of the Opera returns to Central New York as Famous Artists/NAC Entertainment presents the North American touring production for a stretch of performances at downtown Syracuse’s Landmark Theatre.

The Sir Cameron Mackintosh-produced musical has claimed the accolade as the highest-grossing box-office show since coming into the spotlight in 1986. While the actors are dressed in the original designs, the story and some aesthetic aspects, including the infamous chandelier, have received upgrades.

Katie Travis, who plays the Swedish protagonist Christine Daaé, said her role is slightly different and portrayed more realistically. Her infatuation with the Phantom isn’t as magically hypnotic as it is a natural love. “(Christine) is intelligent,” Travis said in a telephone interview, “doing the best with this fork in the road.” The magic isn’t lost, because the coming-of-age aspect puts her into a situation where she has to make a decision.

“It’s an iconic role,” said Travis, who did some homework by checking out videos of previous productions and revisiting cast recordings. “I have a lot of respect for the character’s history.”

Yet she credited herself and her fellow actors for adding personal touches to make the roles uniquely their own. “At some point you have to let it go,” she said. “You have to let yourself grow into the role.”

Chris Mann portrays the divided protagonist and antagonist Erik. “It’s terrifying and nerve-wracking,” the vocalist noted about the title role. “This is a dream opportunity.”

Mann, who was runner-up during the second season of the NBC talent show The Voice, grew up listening to the 1986 CD featuring the original London cast of Phantom, including Michael Crawford, Sarah Brightman, Steve Barton and Rosemary Ashe. In 2012 Mann released his own CD, Roots, a pop- and classical-infused album that showcases his ability to blend the two genres.

He considered himself a pop singer before venturing into classical material, but he described the transition as comfortable. Following the intense, multi-level audition process for the role, Mann allowed, “Phantom feels so natural.”

Mann’s wife, Laura, is also touring with the show as an understudy for five different roles. She looks forward to the Salt City performances as a means for revisiting her roots. “I have a musical theater degree from Syracuse University,” she said. “This is going to be an exciting opportunity.”

Along with the collectively proclaimed “Phamily” of the 80-plus cast and staff, Laura Mann will get to take the floorboards of the 1928-vintage Landmark Theatre. The venue should add authenticity to the touring production, especially considering that author Gaston Leroux penned the French novel almost two decades prior to the opening of the Landmark, which was originally christened Loew’s State.

Heather Chockley, a seasoned stage manager, was here when Phantom played at the Mulroy Civic Center’s 1970s-era modern Crouse-Hinds Concert Theater. Yet she also noted the appeal of the Landmark’s old-school setting. “Our show fits in well at historic theaters,” she said, “but this (Landmark) is a difficult venue for us. Stage left is not that big.”

Much of the production’s set and storage fits on that section of the stage, but Chockley said that they’ll be able to work around it. An advance crew surveyed the venue last year to draft the layouts in order to tailor the spectacular setup to ensure everything will fit, as well as figuring out critical components such as cues for lighting and music. “We also have about 20 trucks to move everything,” she added with a chuckle.

One particular star of this show, stored in a box of its own, is the new Howard Eaton-designed chandelier. The company, which designed the lighting of the Olympic rings for the 2012 London opening ceremonies, created the Phantom staple. The mammoth light fixture weighs in at a little more than a ton, has a diameter of about 10 feet and features more than 6,000 beads. After each city, all of the beads are polished.

“It’s a show within a show,” Chockley summed up about the production’s aesthetic value. The pyrotechnics, original costumes and some set designs from almost 30 years ago all play a huge part in the timeless storytelling. The show’s enduring popularity explains why The Phantom of the Opera is back to haunt the Landmark for 15 spectacle-filled performances.

Rubes, Raffles and Redemption
Double Trouble For A Fast Farce
To Top