“It’s five games. Who cares?” Boeheim said after Syracuse fell to 1-4 with a 101-90 double-overtime loss at Florida State Jan. 13. “You’ve got 13 games to go. Anything can happen. Who cares? That doesn’t matter. You play the next game.”

Boeheim noted that all four of SU’s losses were close, and three of them were on the road to Wake Forest, then-No. 3 Virginia and then-No. 23 Florida State. It’s difficult to win on the road, Boeheim reminded us, particularly in the powerful ACC.

That’s all true, and the Orange (15-6) has since evened its ACC record at 4-4 by defeating Pittsburgh twice and Boston College at home. But as Syracuse reaches the halfway point of its ACC schedule Wednesday night, Jan. 31, at Georgia Tech (10-10, 3-4), it’s important to remember that the Orange will likely need to win another road game or two to have the best chance of qualifying for the NCAA Tournament.

As we learned last year, the NCAA Tournament Selection Committee looks closely at a team’s home and road records. The 2016-2017 Orange finished 19-15 overall, 10-8 in the ACC, and notched impressive wins over then-No. 6 Florida State, then-No. 9 Virginia and then-No. 10 Duke. But Syracuse won only two games away from the Carrier Dome last season, and that road performance plus an ugly home loss to St. John’s sent the Orange to the NIT instead of the NCAA Tournament. 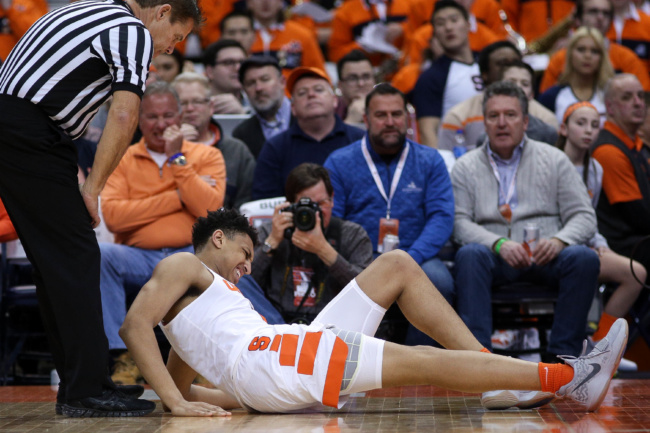 Entering Wednesday night’s game at Georgia Tech, the Orange is 12-2 at home (3-1 in the ACC) and 3-4 on the road or at neutral sites (1-3 in the ACC). Syracuse’s three away-from-the-Dome wins are against Connecticut Dec. 5 at Madison Square Garden, at Georgetown Dec. 16, and at Pittsburgh Jan. 27.

None of those three wins jump out at you as Connecticut was ranked No. 74, Georgetown No. 162 and Pitt No. 180 in the Jan. 27 Rating Percentage Index (RPI), one of the key tools utilized by the NCAA Tournament Selection Committee.

But the good news is that Syracuse was ranked No. 30 in the RPI, and it can move itself off the NCAA Tournament bubble by earning another road win or two against solid teams and picking up a signature win against a top-ranked team. The even better news is that by playing in the ACC, the Orange has the opportunity to do both.

“Coach told us there’s only been a couple of road wins so far in the ACC and that shows you how tough this conference is,” said SU freshman forward Oshae Brissett. “Everyone loves to win on their home court and every team is good, so once you get one away win, then everyone can start talking about you again and we can start to feel confident in ourselves.”

The Orange picked up that first ACC road win Jan. 27, albeit against a Pittsburgh team that’s 0-9 in the conference and has lost seven of those games by double digits. With a surprising effort from freshman center Bourama Sidibe (a career-high 18 points and 16 rebounds in 31 minutes), the Orange overcame a woeful shooting effort (35.2 percent) and the loss of starting forward Matthew Moyer (out indefinitely with a sprained left ankle during the Jan. 24 Boston College game) to outlast the Panthers 60-55 at the Petersen Events Center.

Syracuse’s remaining road games are at Georgia Tech Wednesday, Louisville Feb. 5, Miami Feb. 17, No. 4 Duke Feb. 24, and Boston College Feb. 28. To win one or two of those games, the Orange will need to play more consistently on the offensive end.

Syracuse played what Boeheim called its “best offensive game” in an 81-63 rout of Boston College Jan. 24 at the Dome. But then the Orange turned around and played so poorly on offense against Pitt that the struggling Panthers might be the only ACC team Syracuse would have defeated on that day.

“We’ve had a few road games, we want to be comfortable on the road and we don’t want to look at it like it’s a different game,” Howard added. “You just want our defense to travel, and our offense to travel with it.’’

The lack of consistency has a lot to do with the team’s makeup with two juniors in their first full year as starters (Howard and center Paschal Chukwu), a sophomore in his second year as a starter (Tyus Battle), a redshirt freshman (Moyer), and four true freshmen (Brissett, Sidibe, Marek Dolezaj and Howard Washington).

The Orange has four games remaining against current-top 25 teams and three of them are at home: No. 2 Virginia this Saturday, Feb. 3, No. 19 North Carolina Feb. 21, and No. 20 Clemson March 3. As the season enters the homestretch, the question now is not “Who cares?” The question is, can this group find a way to earn the wins necessary to get the Orange into the NCAA Tournament?

“You’re going to have ups and downs, that’s just the way it is,” said Boeheim, the 42nd-year coach who has led the Orange to 32 NCAA Tournament appearances. “I have to be patient, as much as I can be, which is not that easy.

“They’re doing everything they can to try to get there,” Boeheim added. “Even in the games we’ve lost, they’ve been right there, they’ve done everything we’ve asked them to do, but we got to get older quicker.”

No. 2 Virginia Visits the Dome

The Orange will get its second crack at Virginia this season when the No. 2 Cavaliers visit the Dome at 4 p.m. Saturday. The Cavaliers (20-1) entered Wednesday’s home game against Louisville with a 12-game winning streak and as the ACC’s only undefeated team (9-0).

Tickets for Saturday’s game are available online at Cuse.com, by calling (888) DOME-TIX, or at the Carrier Dome box office at Gate B during regular business hours.