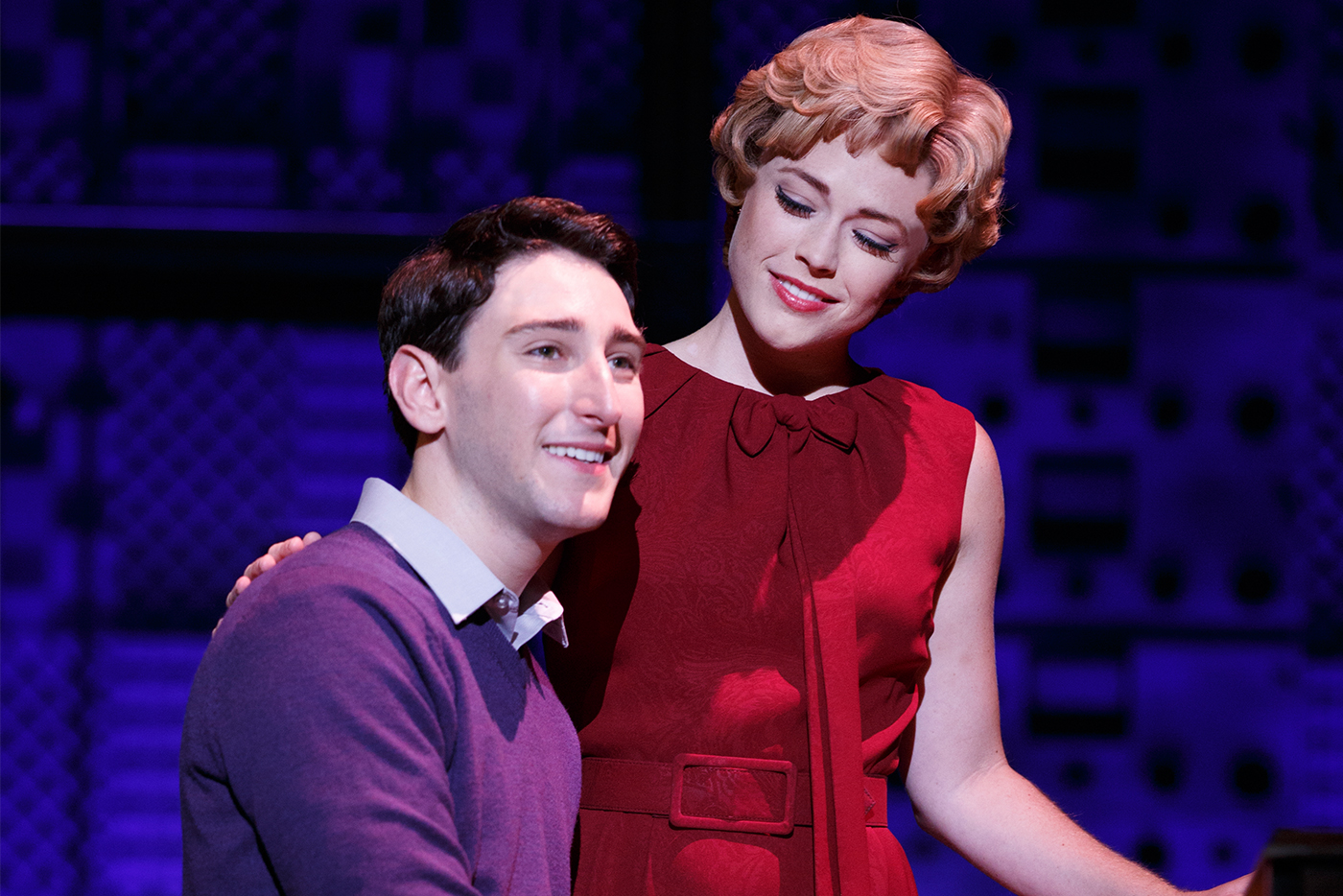 Beautiful: The Carole King Musical is the definition of a jukebox musical: a performance stringing together a storyline with pop hits. But according to actress Erika Olson, who is part of the touring King show presented this week by Famous Artists at the Landmark Theatre, 362 S. Salina St., it’s not your typical jukebox musical.

Beautiful tells the true story of longtime musician and songwriter King (played by Julia Knitel), her life before and after reaching stardom, as she fell in and out of love. King’s first husband, Gerry Goffin (Liam Tobin), was also her songwriting collaborator. Their first notable hit was “Will You Love Me Tomorrow” in 1959.

Olson is portraying Cynthia Weil in her very first role with a national touring production. A May 2016 graduate of Carnegie Mellon University, Olson is excited to take on this role as a notable songwriter in American music history. Weil and her husband Barry Mann (portrayed by Ben Fankhauser) collaborated with several artists in the early 1960s, crafting music and lyrics for familiar Top 40 chart-toppers.

Olson talked about Beautiful when it made a tour stop last week in Schenectady.

How long have you performed with Beautiful?

For about seven months now. I joined in September. After graduating, I spent a summer in New York City, and that’s when I auditioned. I feel very lucky, very blessed to have gotten this job.

What coaxed you into the performing arts?

Similarly to a lot of people in the business, I was born doing it. My parents say I started singing as soon as I came out of the womb. (Laughs.) But I took several dance and voice lessons, plus working at the local theaters in my hometown. This really did turn into a passion, and I didn’t want to do anything else.

I ended up going across the country to a boarding school in Massachusetts. We didn’t have those opportunities in our little town.

There was no school-based or extracurricular performance art education?

No. It was right around the time California started going under financially. Many programs were getting cut, and the arts were the first to go. It was sad, and so I only spent one year of high school at home.

Do you think arts programs will continue to be the most at risk for funding cuts?

Well, with the recent changes in the political world, you never really know. I’d like to believe the arts are going to stay strong. They’re so crucial to society. That’s something I’ve become more aware of while on tour, bringing this show to different cities across the country. There are universal effects the arts have on people.

Is this your first big production?

This is my first. I’ve done professional gigs out in California, but this is by far the biggest thing I’ve done.

How nervous were you?

At this point, not very. Initially I was pretty nervous; apprehensive, I guess, more than nervous. I think a lot of performers experience this. When we step on stage, it really is our happy space.

Do you have any pre-show superstitions?

This is pretty weird, but I have to sing my first song in the show, in my dressing room, and that’s even after warming up. I have this weird feeling that if I don’t sing it before I step out and onto the stage, I have this fear I’ll forget the words.

You’re playing Cynthia Weil, half of the husband-wife team of dynamic songwriters in American history. What’s that like?

I heard this wonderful interview where (Weil) was talking about all the moves she was making at a young age, being a woman in this industry during the 1950s and 1960s. There weren’t many women at all working in the industry. But she never thought about that. She did what she wanted to do. All the doors she wanted to open were able to be opened. It’s remarkable.

Weil had a passion and was driven. She was confident with her writing and with her lyrics. She felt that Donnie Kirshner, who was known as “The Man with the Golden Ear,” needed to hear these lyrics. And she marched in and said, “Hey, you’re gonna listen to me and you will love what you hear.” And he did.

The story in itself is inspiring, especially for me for getting to play her on stage. She and Carole King had a great friendship, but they were both kind of competing while writing all of these songs. There was a comradeship that developed through healthy competition. Great music came from it.

Were you familiar with Weil’s music prior to taking the role?

My process is similar to that of audience members. I recognized the songs, but I had no idea she and Mann were the creators behind these songs. They wrote so many.

Has this production met your expectations?

Normally when I hear the term “jukebox musical,” it’s songs from the Great American Songbook or pop hits strung together by a fictional plot. This is what I was expecting. These can be hit-or-miss. Obviously, Jersey Boys is a huge success. This story is also a true story.

It’s great to see and hear the audience’s experience. There is such a sense of nostalgia when people hear “Will You Still Love Me Tomorrow,” “It’s Too Late” and “We Gotta Get Out of This Place.” You can feel it from the audience, that anticipatory breath. And it makes us really excited to share it.

Do you see this niche of musicals becoming more popular?

I think it’s a foolproof method of creating a musical, because you get the audience involved. In regard to Beautiful, people know King and her music. They want to come see it. Being on the road, it’s obvious to see why these shows are so popular.

I would like to see more of these musicals like this, especially with true stories. King is such an interesting woman, and it’s a story that’s worth sharing with the world. It would be cool to see an Adele musical in the future.

Did you grow up listening to a lot of music?

I did. My parents listened to The Eagles, Bob Dylan and Carole King. I grew up listening to her album Tapestry, and I didn’t realize that King wasn’t of my generation. I was also listening to Norah Jones and Sarah McLachlan. There were a lot of women songwriters who have influenced me in some way or another.

Aside from singing, were you inspired to pick up any instruments?

I do play the guitar, and I bring it out on the road with me. I dabble in writing my own stuff. However, now that I’m portraying a true lyricist, the process is a little intimidating when it comes time to pick up the pen.

Do you think younger millennials who see Beautiful will have a greater appreciation for the history of American music?

To go back to King’s story, Weil and Mann are almost comic relief; she’s dealing with heartbreak and divorce, plus raising two kids on her own. Weil and Mann’s story is constantly on the rise. On top of it all, writing these chart-topping songs is difficult in itself.

Where do you see your own career heading?

I would love to have the opportunity to perform on Broadway. I definitely want to continue musical theater, maybe dabble in film and television. This national tour is pretty close, but I’d love to perform in New York City.

At this point I like being a freelance artist. I can write my own stuff, and a lot of aspects to this field is DIY: If you want to tell a story, tell it. Anyone can use the internet to promote pretty much anything.