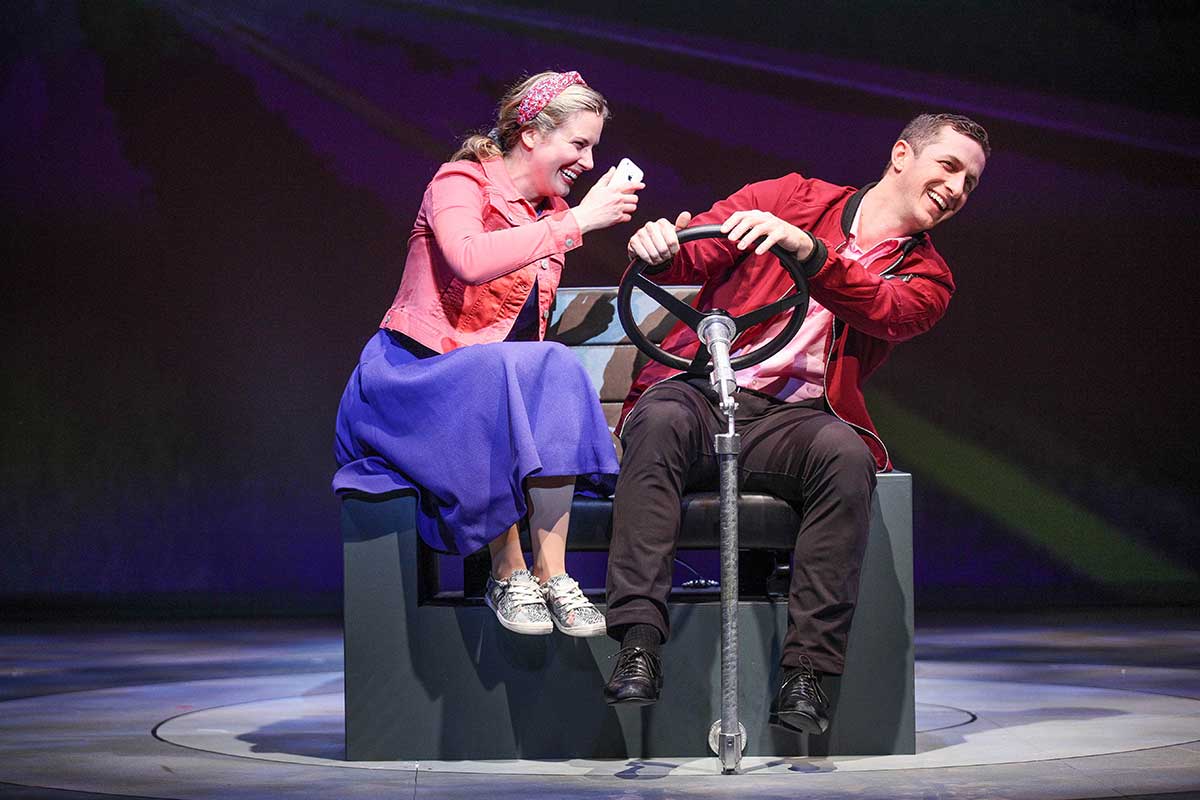 Jason Alexander was in the original cast of Neil Simon’s Broadway Bound (1987) and won a Tony Award for singing and dancing in Jerome Robbins’ Broadway (1989). Yet most audiences cannot overlook nine years of delivering the goods as George Constanza on TV’s Seinfeld (1989-1998).

As Bill DeLapp’s May 29 Syracuse New Times cover story “Stage Struck” pointed out, Alexander thought mostly about the stage from childhood and that movies and television were useful detours until he could return to the boards. As the cover story also revealed about his plans for Syracuse Stage’s production of The Last Five Years (running through June 16), Alexander has paid attention to his surroundings and has made friends wherever he has gone.

Alexander came late to directing and did not learn of The Last Five Years (2001) until it had been around for a while, but has since become a personal friend of composer Jason Robert Brown. In the program notes he says it is “one of the most beloved musicals of contemporary theater.” Never to be confused with The Fantasticks, however, Last Five Years is a bittersweet autobiography about the failure of Brown’s marriage, with two characters, Jamie Wallerstein (Ken Wulf Clark), an author, and Cathy Hiatt (Hanley Smith), an aspiring actress. It is so close to life that Brown’s actual ex-wife, actress Theresa O’Neill, sued to have certain lines removed from the text.

Thematically ambitious, Last Five Years seeks to depict the discovery and triumph of love, and also simultaneously its decay. Jamie sings his numbers in chronological order, and Cathy in reverse. It’s like a blending of I Do! I Do! and Harold Pinter’s Betrayal. The device, in any production, is not hard to follow.

Instead the contrasting emotions tend to heighten the import of every song we hear. Nearly all are solos, with duets where the two trajectories intersect in the middle. Supporting Alexander’s assertion about the show’s popularity, there have been four earlier productions on the Syracuse New Times stage beat in 15 years, never doing fabulous box office but always attracting strong directors of vision.

Previously The Last Five Years has been a kind of extended cabaret on a spare set with two players and a handful of musicians, maybe only one. This version, with music director Brian Cimmet leading a six-player orchestra, choreographer Lee Martino, dance captain Marisa Field, scenic designer John Iacovelli and sound designer Jacqueline R. Herter, is one of the most eye- and ear-filling items of the year. Driscoll Otto’s lighting and production designs take us down a country road in Ohio and deliver a sleet storm with bouncing hailstones. Mobile screens and projections can appear and dissolve in an instant.

Alexander’s most striking innovation is that singing Jamie and singing Cathy are no longer alone on the stage. With them are silent Shadow Jamie (Adrian Lee) and Shadow Cathy (Marisa Field), roughly the same physical types as the singers and dressed in ways to assure the links between. Dancing or miming doppelgangers have many antecedents, at least as early as Agnes de Mille’s Dream Laurey and Dream Curly in Oklahoma! At one level they contribute to the visual engagement of the whole so that there is often more than eyes can keep up with. Both Lee and Field appear to be gymnasts as well as dancers and can bend themselves around corners.

More importantly, they make physical what was previously only implied. All solos are now “heard” by the opposite party. And as we reel toward the end of the hour and 45-minute action, we see the evidence of how Jamie failed the marriage, namely Field as a Shadow Other Woman in a different wig.

In his Syracuse New Times interview Alexander spoke of running his innovations by composer Brown in a lengthy email, who was most concerned that not a word or note be changed or added. After that Brown concluded, “Do whatever you want, and it won’t work.” The director considered this a “blessing” and dove in.

The result feels like a different play, more Broadway than off-Broadway. The most striking number in Alexander’s staging is the mock Christmas celebration, “The Schmuel Song,” with the wittiest lyrics of the entire show. Jamie is a metropolitan Jewish boy who earlier romances Cathy, a Catholic from the sticks, with “Shiksa Goddess.” He also says ethnic and religious differences are easier to take than a shaved head or a pierced tongue. With cap and beard, Ken Wulf Clark’s Jamie gambols through some Yiddish-accented wordplay that might have come from a hip W.S. Gilbert.

Later comes the bright-hued and comic “A Summer in Ohio,” which feels like it might have appeared in an MGM production of a Rodgers and Hammerstein musical.

Fundamentally, however, The Last Five Years is about how effectively the music depicts contrasting masks of comedy and regret, seen here side-by-side. In Alexander’s staging, women in the audience are likely to be less sympathetic with Jamie’s failure in the marriage, despite how plangently Ken Wulf Clark delivers his second-to-last song “Nobody Needs to Know” and his finale, “I Could Never Rescue You.” He’s also charming and attractive in the early numbers that win Cathy over, like “Moving Too Fast.”

Despite the fears from Brown’s ex-wife’s, on the other hand, Hanley Smith’s Cathy — as Brown has projected her — has compelling musical assets, starting with the opening “Still Hurting,” before we know what’s coming. In her affecting finale, about falling in life, “Goodbye Until Tomorrow,” we relive the composer’s guilt.”

Previous visits from celebrities at Syracuse Stage have always been the happiest, with Jean Stapleton, Elizabeth Franz and Sam Waterston among the best. On his visit to town, Jason Alexander gives us a Last Five Years unlike any version seen anywhere else.

Review | Cavalcade of jukebox memories is unleashed during ‘The All Night Strut!’
Cortland Repertory, Auburn’s Merry-Go-Round Playhouse kick off busy season for summer stages
To Top